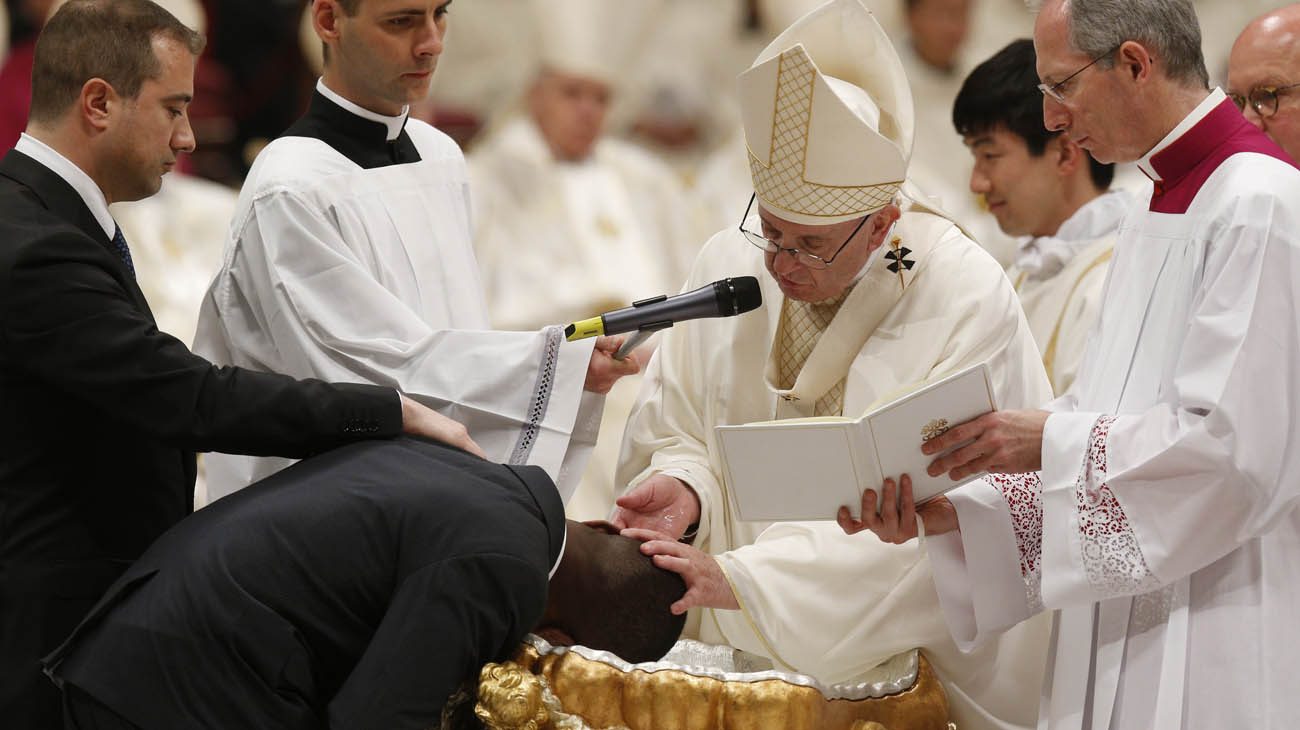 Pope Francis baptizes John Ogah, accompanied by his sponsor, Capt. Nunzio Carbone, during the Easter vigil in St. Peter's Basilica at the Vatican March 31. Ogah, a Nigerian immigrant in Rome, stopped a machete-wielding thief who had just robbed a store. (CNS photo/Paul Haring)

Easter is “an invitation to break out of our routines and to renew our lives, our decisions and our existence,” the pope said during the Easter Vigil March 31 in St. Peter’s Basilica.

“Do we want to share in this message of life,” he asked in his homily, “or do we prefer simply to continue standing speechless before events as they happen?”

During the liturgy, Pope Francis baptized eight adults, who were between the ages of 28 and 52. The Vatican said Nathan Potter, who was born in 1988 and comes from the United States, was one of the eight. Four of the other catechumens were from Italy and one each came from Albania, Peru and Nigeria.

The Nigerian, 31-year-old John Ogah, became a hero last year in Centocelle, a neighborhood on the outskirts of Rome. Ogah, who had been begging outside a grocery store, stopped a machete-wielding thief who had just robbed the store. Once the police arrived, Ogah left because he did not have legal permission to be in Italy.

Police tracked Ogah down to thank him and ended up helping him get his Italian residency permit. Capt. Nunzio Carbone, the officer in charge, was Ogah’s godfather and sponsor at the papal liturgy.

Pope Francis also confirmed the eight and give them their first Communion during the Mass.

The Mass, on a very rainy night, began in the atrium of St. Peter’s Basilica with the blessing of the fire and of the Easter candle. With most of the lights in the basilica turned off, Pope Francis and the concelebrating cardinals, bishops and priests processed in darkness toward the altar, stopping first to light the pope’s candle and then those of the concelebrants and faithful. 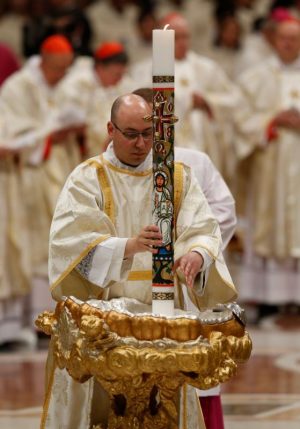 A server places a candle in the baptismal font during the Easter vigil celebrated by Pope Francis in St. Peter’s Basilica at the Vatican March 31. (CNS photo/Paul Haring)

“We began this celebration outside, plunged in the darkness of the night and the cold,” the pope said in his homily. “We felt an oppressive silence at the death of the Lord, a silence with which each of us can identify, a silence that penetrates to the depths of the heart of every disciple, who stands wordless before the cross.”

Transitioning from the Good Friday commemoration of Jesus’ death and commenting on the silence of Holy Saturday, the pope spoke of the hours when Jesus’ followers are left speechless in pain at his death, but also speechless at the injustice of his condemnation and at their own cowardice in the face of the lies and false testimony he endure.

“It is the silent night of the disciples who remained numb, paralyzed and uncertain of what to do amid so many painful and disheartening situations,” the pope said. “It is also that of today’s disciples, speechless in the face of situations we cannot control, that make us feel and, even worse, believe that nothing can be done to reverse all the injustices that our brothers and sisters are experiencing in their flesh.”

But in the midst of silence, he said, the stone is rolled away from Jesus’ tomb and there comes “the greatest message that history has ever heard: ‘He is not here, for he has been raised.'”

Jesus’ empty tomb should fill Christians with trust in God and should assure them that God’s light “can shine in the least expected and most hidden corners of our lives.”

“‘He is not here … he is risen!’ This is the message that sustains our hope and turns it into concrete gestures of charity,” the pope said. It is a call to revive faith, broaden one’s horizons and know that no one walks alone.

“To celebrate Easter is to believe once more that God constantly breaks into our personal histories, challenging our conventions, those fixed ways of thinking and acting that end up paralyzing us,” he said.

NEXT: Venezuelan bishops: Jail fire that killed 68 could have been prevented