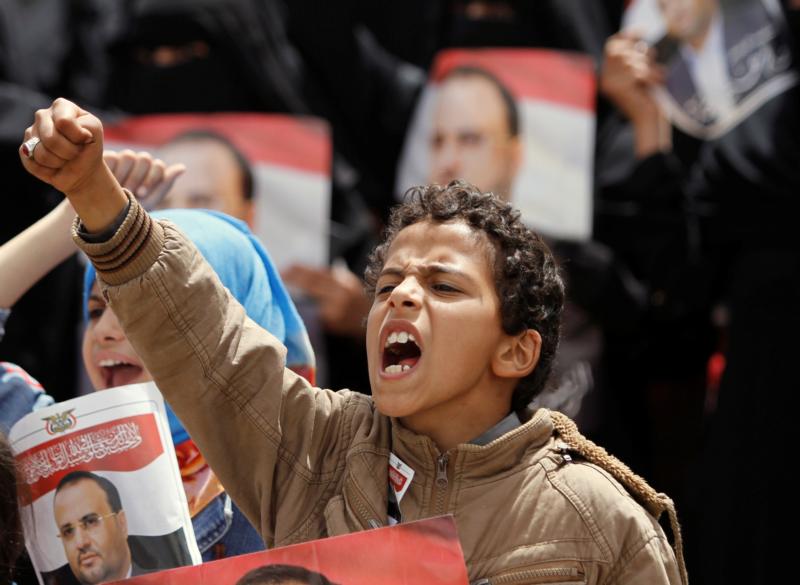 A boy shouts during a protest in Sanaa, Yemen, April 26. Catholic and other faith-based aid groups are urging an end to fighting in Yemen, where three years of war have created a humanitarian crisis, including “the world’s largest food security emergency,” according to the United Nations. (CNS photo/Mohamed al-Sayaghi, Reuters)

AMMAN, Jordan (CNS) — Catholic and other faith-based aid groups are urging an end to fighting in Yemen, where three years of war have created a humanitarian crisis, including “the world’s largest food security emergency,” according to the United Nations.

Children are bearing the brunt of Yemen’s conflict, the U.N. warned, with 80 percent of them in desperate need of aid and 2 million suffering from acute malnutrition.

“We were shocked about the numbers coming out of Yemen on famine and starvation, especially of children under the age of 5,” said Giovanna Reda of the British Catholic aid agency CAFOD, a member of the Caritas network.

Reda expressed concern that if the conflict continues to spiral, it will unfold into a “protracted humanitarian crisis.”

“We are calling for humanitarian access and a diplomatic solution to the war,” she said of all parties involved. “People should not be allowed to die because they no longer have food.”

Reda told Catholic News Service that the critical situation prompted her London-based agency to get involved in the impoverished country found at the tip of the Arabian Peninsula. The civil war there — pitting government troops and Houthi rebels, proxies of Saudi Arabia and Iran — is having a decimating impact, she said.

More than 5,000 children have been killed or injured — an average of five children every day — since the conflict began in March 2015, reported the U.N. children’s agency, UNICEF.

“Even after the conflict ends, the effects of malnutrition, such as stunted growth and delayed cognitive development, may linger,” it said. “In the worst cases, it is fatal.”

“These people are mainly children under 5 as well as pregnant and breastfeeding mothers. This food assistance is helping families most affected by malnutrition, whether it be severe, acute, or moderate acute. From a health point of view, the situation is dangerous,” Reda said of one part of a larger crisis.

A cholera outbreak affected 1 million Yemenis some months ago, while diphtheria has emerged recently.

Aid officials estimate that about 80 percent of Yemen’s 22 million people are in urgent need of humanitarian assistance such as food, water, shelter, sanitation and medical care. The country’s infrastructure has been destroyed and its health services crippled, largely due to bombing. A partial blockade of badly needed medical and other supplies has also been in place.

The Saudi-led coalition insists it never deliberately targets civilians, but human rights groups have accused it of bombing markets, schools, hospitals and residential areas. The U.N. reported that more than 5,970 civilians have been killed and 9,490 injured so far, with no end in sight to the conflict.

Even before the outbreak of war, Yemen faced tremendous challenges from widespread poverty, food insecurity and a lack of health services.

Reda explained that CAFOD, which is also a member of the Disaster Emergency Committee, a network of 13 British-based agencies, works with partners in Yemen, mainly in the south of the country. However, the nongovernmental agency it cooperates with cannot be named due to security concerns.

Meanwhile, an official of World Relief Germany who works in Yemen said the Christian organization has set up an “emergency response network of 2,000 first aid-trained volunteers in 20 out of Yemen’s 22 governorates on both sides of the conflict, to be able to provide basic medical care to Yemenis in their towns as well as to bring them to hospitals which still function.”

He told CNS that the agency based in Amman, Jordan, also took medical supplies into the country, including oral rehydration, for Yemen’s Ministry of Public Health to fight the cholera outbreak.

“We had zero experience airlifting supplies into Yemen, but we knew we were in a strategic place to do so,” said the employee, who asked that his name not be used. “Within six months, we imported 21 metric tons of needed materials with the support of donors in the U.S. and Europe in 2017.”

“It’s heartbreaking to see where the level of poverty has gone. Homeless families are now living in rooms in mosques. Houses are full of multiple families living together with the elderly, children, and the disabled,” said the employee, who lived and studied Arabic in Yemen prior to the conflict. “They are reliant on donations for the medicines they need.”

He personally set up a food basket providing several months of staple goods to help those in very vulnerable situations.

“God has created each person on this earth with purpose, dignity and worth. Whenever he sees people suffering, his heart is broken,” he said. “But he has also given people, like myself, resources and abilities, and I need to steward them in such a way that actually supports those in need, whether it is in my own neighborhood or halfway across the world.”

NEXT: Without love and service, church is just an ’empty institution,’ Pope Francis says