In Canada, prayers, tears for victims of Humboldt Broncos tragedy 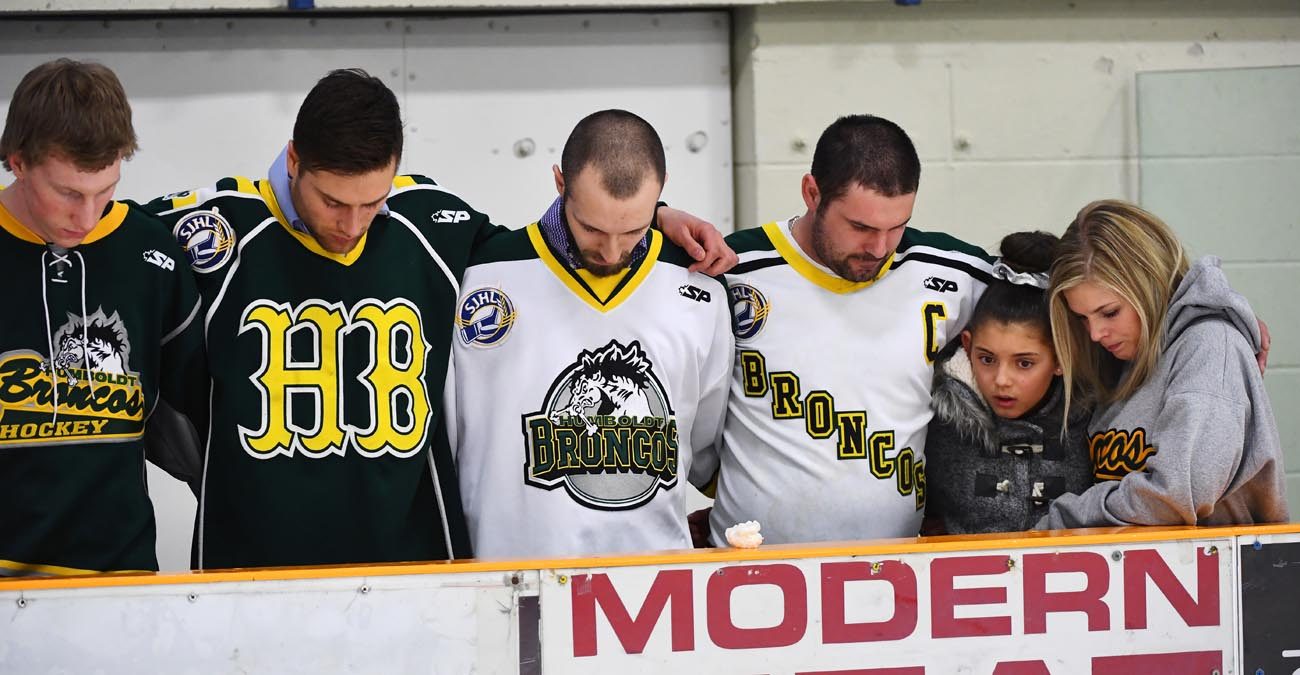 Mourners pray during an April 8 vigil at Elgar Petersen Arena in Humboldt, Saskatchewan, to honor members of the Humboldt Broncos junior hockey team who were killed in a fatal bus accident. (CNS photo/Jonathan Hayward, Reuters)

HUMBOLDT, Saskatchewan (CNS) — Crying, hugging and shaking their heads in grief, the people of Humboldt gathered at the local hockey arena April 8 for an interfaith service to mourn 15 people who died after the bus carrying the town’s junior hockey team collided with a truck.

“I don’t want to be here, but it’s good that we are,” said the Rev. Sean Brandow, the Humboldt Broncos team chaplain and pastor of Humboldt Bible Church.

Rev. Brandow had gone to the accident site shortly after the collision.

“I walked up on a scene I never want to see again, to sounds I never want to hear again,” he said. “To hear groaning and panic and fear and confusion and pain. … All I saw (that night) was darkness, and I had nothing. Nothing.

“I’m a pastor. I’m supposed to have something.

“I’ve received thousands of texts and even Scripture,” he said. “But I needed to hear from God.”

The 15 dead included 10 hockey players between the ages of 16 and 21, the team coach, radio broadcaster, bus driver and other team personnel. The accident occurred early in the evening April 6 when a bus taking the team to a playoff hockey game collided with a transport truck on a highway near the town of Tisdale, Saskatchewan. Fourteen others on the bus were injured.

Police are investigating and have not provided any details about the cause of the collision. The bus was traveling north on a highway and passing through an intersection, which had stop signs for traffic traveling east and west. No charges have been filed. 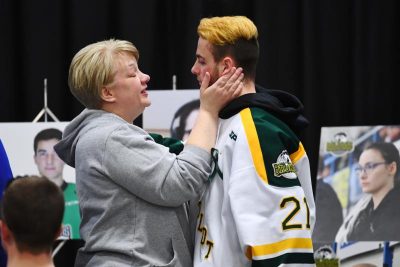 Humboldt Broncos’ Nick Shumlanski, just released from the hospital, is comforted by a woman during an April 8 vigil at Elgar Petersen Arena in Humboldt, Saskatchewan. (CNS photo/Jonathan Hayward, Reuters)

Condolences poured into Humboldt from around the world, including messages from Pope Francis, Queen Elizabeth and U.S. President Donald Trump. The Vatican secretary of state sent blessings on behalf of the pope.

“Informed of the injury and tragic loss of life caused by the road traffic accident in the province of Saskatchewan involving young hockey players, His Holiness Pope Francis sends his condolences to those who have lost love ones, and commends the souls of the deceased to the mercy of almighty God. To all in the community at this difficult time, Pope Francis sends his blessing.”

Bishop Hagemoen attended the evening prayer service at the Elgar Petersen Arena and Uniplex in Humboldt and offered a final blessing.

“Lord God, you are the light that illumines the darkness,” he prayed. “Continue to lead us into your light.”

Earlier, he sent a message of condolences and prayers to those affected by the tragedy.

“God continues to respond to us, and now he responds to the people of Humboldt and other parts of Western Canada who are profoundly affected by this terrible tragedy,” he said. “I am very thankful that, at this terrible time, the people of God here show Christ-like compassion and care through such a community of support.”

The interfaith service was live-streamed and watched across the province, including at St. Augustine Catholic Church just up the street from the arena.

Father Joseph Salihu, pastor of St. Augustine, participated in the vigil. He said as soon as news of the accident spread across town, “all the ministers came as one … we drove straight to the Uniplex to be with the families.”

“We just stayed with the people and waited,” he said. “We were there all together, and that is what gave us the idea to organize this vigil.

“Coming together tonight is a powerful sign that these families are not alone in their anguish. We need to remember that, after the funerals, these people will still need our presence.”

A Go-Fund-Me page was set up to collect donations for families. Organizers hoped to raise $10,000 but, in less than 48 hours, donations exceeded $4 million.

“We remember the words of Jesus, who told us: ‘You will be sorrowful, but your sorrow will turn into joy,'” Rev. Carboni said. “We need each other to make this promise a reality.”

Bishop Bryan Bayda of the Ukrainian Catholic Eparchy of Saskatoon proclaimed Psalm 23, better known as “The Lord is My Shepherd.”

There was a moment of silence at 7:32 p.m., the time when the puck would have dropped on the Broncos’ playoff game in Nipawin.

The Rev. Brenda Curtis of Westminster United Church led a closing prayer: “Humboldt family and friends, a quilt of love has been placed around our shoulders and our community as our brothers and sisters around the world have held us in their care.”

While the largest vigil was held in Humboldt, prayer services for the victims and families were held across the province.

NEXT: Bishops on both sides of Mexico border criticize troop deployment