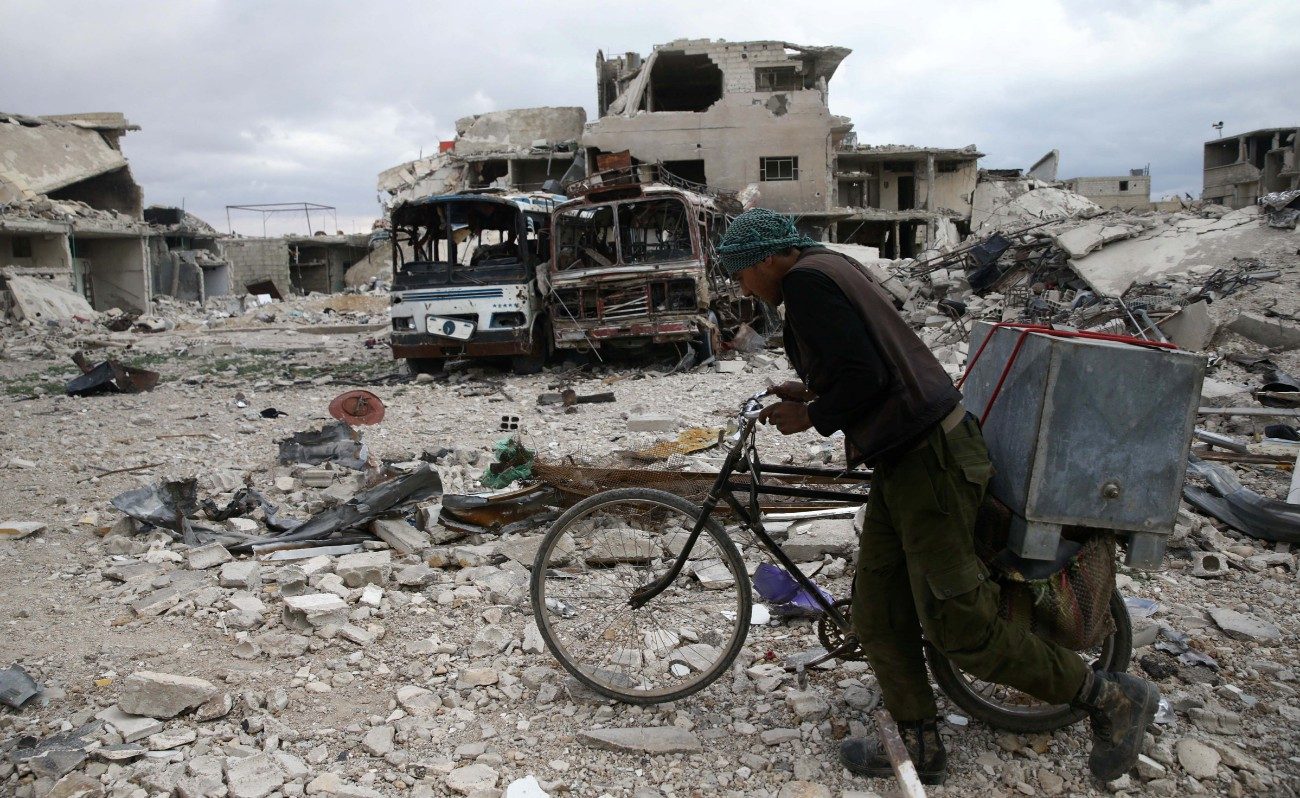 A man walks with his bicycle at a damaged site in Damascus, Syria, March 30. In his Easter appeal for peace throughout the world, Pope Francis made special mention of the ongoing "carnage" in Syria and the recent violence along Israel's border with the Gaza Strip. (CNS photo/Bassam Khabieh, Reuters)

VATICAN CITY (CNS) — In his Easter appeal for peace throughout the world, Pope Francis made special mention of the ongoing “carnage” in Syria and the recent violence along Israel’s border with the Gaza Strip, violence the pope said had not spared “the defenseless.”

Before giving his formal Easter blessing “urbi et orbi” (to the city and the world) April 1, the pope prayed Easter would bring “fruits of reconciliation,” hope, dialogue, peace, consolation, new life and wisdom to the world’s trouble spots and to troubling situations, like the current migration and refugee crisis.

After 15 Palestinians were killed March 30 during protests along the Gaza border with Israel, Pope Francis begged God for the “fruits of reconciliation for the Holy Land, also experiencing in these days the wounds of ongoing conflict that do not spare the defenseless.”

He also prayed for Yemen and the entire Middle East, “so that dialogue and mutual respect may prevail over division and violence.”

Remembering Christians in the Middle East who have suffered for their faith, the pope prayed that “our brothers and sisters in Christ, who not infrequently put up with injustices and persecution, (might) be radiant witnesses of the risen Lord and of the victory of good over evil.”

The pope’s prayers for peace also included “the beloved and long-suffering land of Syria, whose people are worn down by an apparently endless war.”

“This Easter,” he prayed, “may the light of the risen Christ illuminate the consciences of all political and military leaders, so that a swift end may be brought to the carnage in course, that humanitarian law may be respected and that provisions be made to facilitate access to the aid so urgently needed by our brothers and sisters, while also ensuring fitting conditions for the return of the displaced.”

NEXT: Easter shows the power of love, which renews the world, pope says