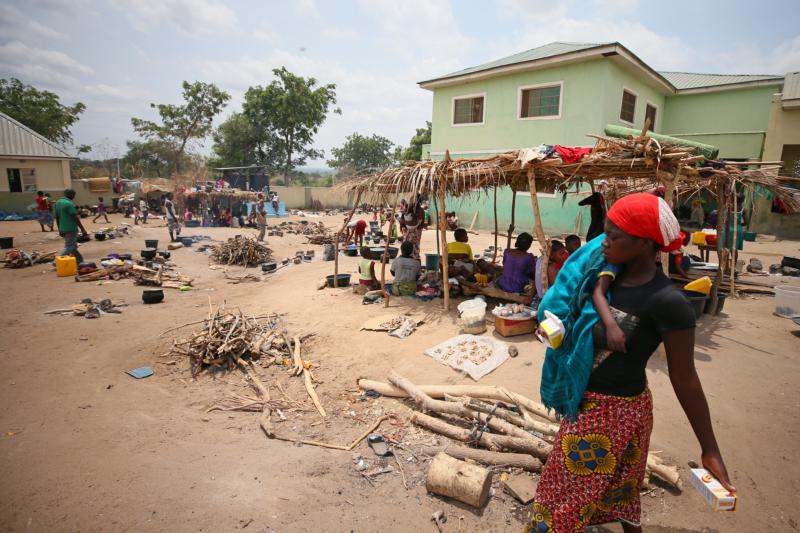 A woman carries a child through a camp in the state of Benue, Nigeria, April 11. The Catholic Diocese of Makurdi and others condemned the killings of two priests and 17 parishioners of St. Ignatius Catholic Church in the state. (CNS photo/Afolabi Sotunde, Reuters) See NIGERIA-ATTACK-MASS April 26, 2018.

LAGOS, Nigeria (CNS) — Nigerian religious leaders condemned the killing of about 19 people during a morning Mass in Benue state.

Father Aondover Moses Iorapuu, communications director for the Diocese of Makurdi, called the killings shocking and barbaric and said one would not think they could occur in the 21st century.

Benue Police Commissioner Fatai Owoseni said an investigation led police to believe about 30 Fulani herdsmen, a mainly nomadic group, carried out the attack. The state has had nearly 50 attacks in three years linked to grazing rights and dwindling fertile land.

Father Iorapuu appealed to federal and state authorities to provide adequate security for the residents. He also appealed to Nigerians to continue to pray for peace in Benue, saying its citizens had been experiencing recurring killings from suspected militias in recent years.

Msgr. Gabriel Osu, director of social communications for the Archdiocese of Lagos, said the killings were a calculated attempt to instigate hatred and create fear. He said attackers were emboldened daily by the inability of the government and the law enforcement agencies to stop them.

“The country is gradually drifting to a state of anarchy, where anything goes,” said Msgr. Osu. “Let those in authority beware of a gathering storm.”

He also said it was unbelievable that some people would attack worshippers in a church.

“What manner of insanity and sadism will make some people open fire on priests celebrating Mass in the house of God? What is their offense? Of what use is their death to the perpetrators?

“This is the height of evil and human callousness that must be condemned in all its entirety by every sane society,” he said.

The Rev. Olasupo Ayokunle, president of the Christian Association of Nigeria, admonished the government to perform its constitutional responsibility of protecting the citizens.

He urged the government to disarm “herdsmen across the country in national interest.”

Ishaq Akintola, director of Muslim Rights Concern, urged government officials to capture and prosecute the killers. He said life is sacrosanct and should not be toyed with.

“Although, the attackers also burned 50 houses and sacked the entire community, we are singling out the vicious attack on the church for strong condemnation,” he said. “Those that attacked the house of God have no single atom of piety in their hearts. They should therefore not expect mercy from Allah, the supreme creator.”

“Nigeria should explore justice system reforms that address grievances so that herdsman — the perpetrators of much of the recent violence — cease targeting farmers, exacerbating religious and ethnic tensions in the process,” he said.