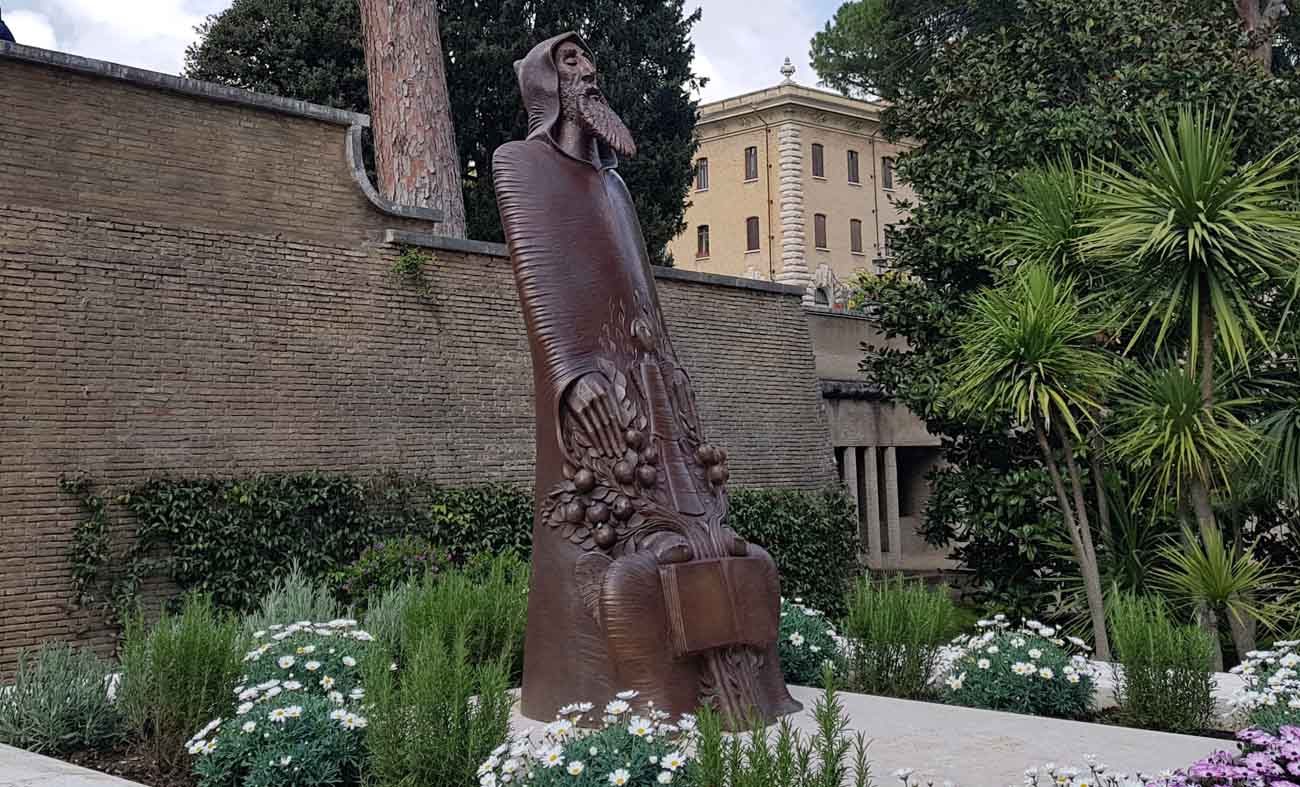 VATICAN CITY (CNS) — During a brief ceremony in the Vatican Gardens, Pope Francis blessed a new statue of a 10th-century Armenian monk he had declared a “doctor of the church” in 2015.

Blessing the bronze statue of St. Gregory of Narek April 5 capped off a series of morning meetings with Armenian political and religious dignitaries, beginning with Armenian President Serzh Sargsyan.

Arriving shortly after them in a blue Fiat, Pope Francis began the ceremony, which included a Gospel reading as well as a recitation of a prayer composed by St. Gregory.

Also present for the blessing was Armenian Catholic Patriarch Gregoire Pierre XX Ghabroyan of Cilicia, who prayed that, through the intercession of holy ascetics like St. Gregory, “the Lord have mercy on us and raise us to life.”

Catholicos Karekin prayed that Christians would become examples of holiness like the saintly Armenian monk.

“Lord, grant us to live according to their example and to the very end secure us in the true and right faith, in the hope of eternal life,” he prayed.

Earlier, in the library of the apostolic palace, Pope Francis and Sargsyan met privately for about 25 minutes, discussing the regional political situation, local conflicts and “the condition of Christians and religious minorities, especially in theaters of war,” the Vatican said in a written statement.

Sargsyan gave Pope Francis a model of the 7th-century Church of St. Gayane. Built in 631, the ancient church is located in Etchmiadzin, the seat of the Armenian Apostolic Church.

For his part, the pope gave the Armenian head of state a statue depicting Jesus’ healing of the paralyzed man and a copy of his message for World Peace Day 2017. He also gave Sargsyan copies of three of his documents: “The Joy of the Gospel”; “Amoris Laetitia,” on the family; and “Laudato Si,'” on the environment. 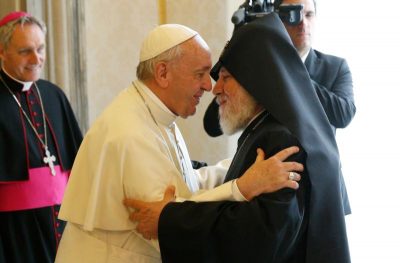 Immediately after his meeting with the president, the pope met with Catholicos Karekin, warmly embracing the patriarch upon his arrival. After their nearly 40-minute meeting, Pope Francis gave him an etched stone cross.

Catholicos Karekin gave the pope a book on the ancient monastery of Narek, telling him that “at the end of the book, there are pictures of the monastery which today doesn’t exist; it was destroyed.”

After a 25-minute private meeting, the patriarch asked Pope Francis about his health, to which the pope replied, “Great, great.”

He then gave Pope Francis a gold-plated, traditional Armenian cross known as a khachkar. Pope Francis kissed the cross, while Catholicos Aram kissed a stone cross given to him by the pope.

Pope Francis then made his way to the Vatican Gardens for the blessing and unveiling of the statue of St. Gregory of Narek, one of the leading figures of Armenian theology and thought.

Born in 950 in the Armenian town of Andzevatsik, located in present-day Turkey, Gregory entered a monastery at a young age and was ordained a priest at 25. He lived at the monastery at Narek his whole priestly life and taught at the monastic school.

His best-known writings include a commentary on the Song of Songs and his “Book of Lamentations,” now commonly known as “Narek,” which includes 95 prayers. Many of the prayers are included in the Armenian Divine Liturgy and have been translated into more than 30 languages.