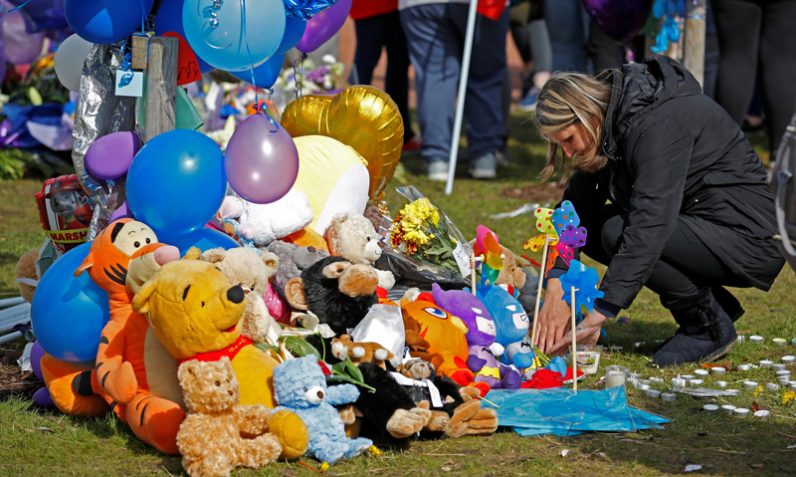 A woman looks at flowers, candles and toys left as a memorial to Alfie Evans in Liverpool, England, April 28. The 23-month-year-old died April 28 from complications of a degenerative brain condition. (CNS photo/Phil Noble, Reuters)

The 23-month-old boy died at about 2:30 a.m. April 28 after his father, Tom Evans, spent 10 minutes trying to revive him by mouth-to-mouth resuscitation, according to reports in the British media.

Tom Evans, a Catholic, announced the death of his son on Facebook later that day with words: “My gladiator lay down his shield and gained his wings at 02:30 … absolutely heartbroken … I LOVE YOU MY GUY.”

Soon afterward, Pope Francis, who had met Tom Evans at the Vatican April 18, tweeted: “I am deeply moved by the death of little Alfie. Today I pray especially for his parents, as God the Father receives him in his tender embrace.”

The Vatican-owned Bambino Gesu hospital in Rome offered to care for Alfie, although doctors who examined him said not much could be done but to make him comfortable. On April 23, the Italian government granted citizenship to the boy so he could be evacuated by a waiting air ambulance.

But that same day, Alfie was taken off his ventilator, and he was expected to die imminently. He began breathing unaided, prompting appeals by his parents to the High Court and then the Court of Appeal to allow their son to leave the country.

Judges upheld the original decision that it was in the “best interests” of Alfie, who suffered from a severe degenerative brain condition, to be allowed to die.

Tom Evans, who had been highly critical of Alder Hey Children’s Hospital in Liverpool, ceased to give media interviews April 26, saying he wanted to cooperate with doctors in the hope Alfie might be taken home.

His inability to remove his child from the hospital led to passionate demands from politicians and media commentators for an “Alfie’s law” to allow parents to seek help elsewhere when doctors believe they can do no more.

The case had also drawn criticism of the British courts and health service from all over the world.

In the U.S., National Right to Life President Carol Tobias said in an April 29 statement that “no parent should ever be forced to the sidelines while the government decides whether their child will receive medical treatment or not.”

Tobias said: “Let’s be clear: Alfie Evans was sentenced to death by Britain’s National Health System (Service) and the High Court. Their intransigent commitment to the country’s faulty single-payer health system led them to conclude it was better for Alfie to die than leave the country and receive potentially life-saving treatment elsewhere.”

The Bishops’ Conference of England and Wales has defended of the actions of the hospital, however.

Archbishop Malcolm McMahon of Liverpool said he discussed the case personally with the pope and has assured him that Alder Hey had done everything “humanly possible” to help Alfie, according to an April 25 report in The Tablet magazine.

Following the death of the boy, the archbishop praised the professionalism of the staff of the hospital in a statement posted April 28 on the website of the Bishops’ Conference of England and Wales.

“I would like to express my deepest sympathy at this moment of loss to Tom and Kate as we hold little Alfie in our prayers,” said Archbishop McMahon.

“We must recognize that all who have played a part in Alfie’s life have wanted to act for his good, as they see it,” he said. “Above all, we must thank Tom and Kate for their unstinting love of their son, and the staff at Alder Hey Hospital for their professional care of Alfie.”

So far, a date has yet to be announced publicly for Alfie’s funeral, but it was expected to take place in Liverpool within two weeks.

PREVIOUS: Pope asks Catholics to pray rosary for peace each day in May

NEXT: Even amid suffering, love highlights value of every life, pope says