Pope to priests: Show Jesus’ truth by being close to the people 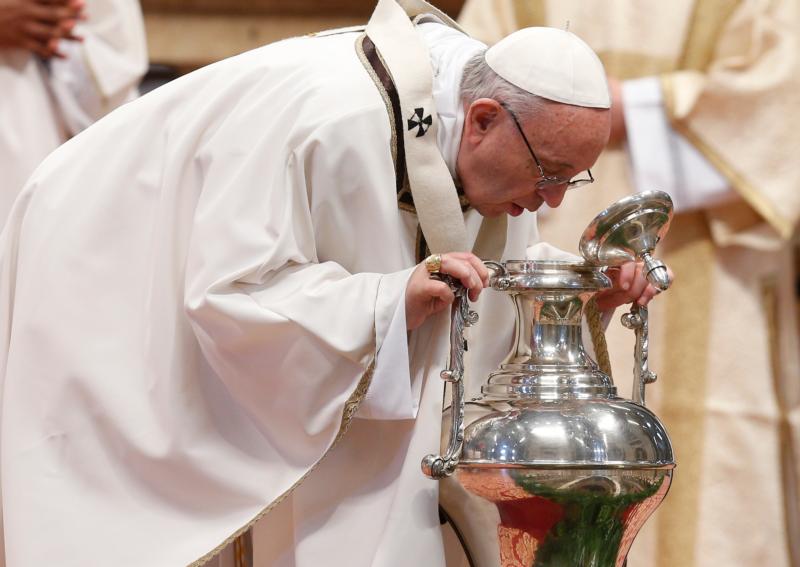 VATICAN CITY (CNS) — If Jesus and his truth are to become truly present in today’s world, priests must do what Jesus did and be “street preachers,” going out to encounter and accompany sinners with tenderness and compassion, Pope Francis told the world’s priests.

Jesus “could have been a scribe or a doctor of the law, but he wanted to be an ‘evangelizer,’ a street preacher,” the bearer of good news for his people, the pope said March 29 during the chrism Mass in St. Peter’s Basilica.

“This is God’s great choice: The Lord chose someone who is close to his people,” Pope Francis said. Jesus’ incarnation implies inculturation, so that people find his presence not only in far-off lands, but in their own parish, “in the new culture of young people,” he added.

As Holy Thursday was the day Jesus shared his priesthood with the apostles, Pope Francis led the many priests, bishops and cardinals present in a renewal of their priestly vows. He also dedicated his lengthy homily to how God’s special gift of being close to his people relates to the vocation of being a priest.

Being close reflects an attitude and a way of relating to or connecting with others that allows the priest to be true to himself and be attentive to those with whom he engages, the pope said.

The people immediately recognize those priests as being special, he said. They are priests who are always available and who talk to everyone: adults, children, the poor and those who do not believe; they are “street priests,” he said.

That is because the truth is not only what allows people to size up situations and things from a distance with abstract concepts and logical reasoning, the pope said. “Truth is also fidelity. It makes you name people with their real name, as the Lord names them, before categorizing them or defining ‘their situation.'”

Speaking off-the-cuff, the pope said there is a “terrible” tendency to see and define people by their “adjectives,” their faults and virtues, rather than by their substantive nature, their “noun” as a child of God.

The pope also cautioned against “the temptation of making idols of certain abstract truths. They are comfortable idols, within easy reach; they offer a certain prestige and power and are difficult to discern.”

This “truth-idol” can disguise itself, dressing itself up with the words of the Gospel, but in a way that the words will never touch people’s heart, he said. And, what is worse, “it distances ordinary people from the healing closeness of the Word and of the sacraments of Jesus,” he told those assembled.

Mary, he said, is also a model of how to be close since “‘she walks at our side, she shares our struggles and she constantly surrounds us with God’s love,’ in such a way that no one feels left out.”

If priests are to say, as Mary does to the servants at the wedding in Cana, “Do whatever he tells you,” they must first be like her — present where things are “brewing,” like at the wedding feast, he said. “Only through this kind of closeness can we discern which is the wine that is missing, and what is the best wine that the Lord wants to provide.”

A priest’s closeness, he said, is needed in a special way at three times, times when the words, “Do everything Jesus tells you,” need to be heard: during moments of spiritual dialogue, during confession and when preaching the homily.

To understand what this closeness looks like, the pope again pointed to Jesus as the model whose approach and way of speaking with sinners led to their recognizing the truth and conversion.

When Jesus tells people, “Go and sin no more,” he is not speaking in the “legalistic tone” of someone who believes he must determine the “parameters of divine mercy,” he said.

On the contrary, those words need to be spoken in a way that enables the sinner “to look ahead and not behind. The right tone of the words ‘sin no more’ is seen in the tone of the confessor who says them, willing to repeat them 70 times seven,” the pope said.

Finally, the pope said, “the homily is the touchstone ‘for judging a pastor’s closeness and ability to communicate to his people.’ In the homily, we can see how close we have been to God in prayer and how close we are to our people in their daily lives,” he added.

If a priest feels far from his people, the pope said, he should draw closer to the Lord and the Gospel so “Jesus will teach you his way of looking at people, and how precious in his eyes is every individual for whom he shed his blood on the cross.”

And if a priest feels far from God, he should draw closer to his people, the pope said. “The little ones will teach you to look at Jesus in a different way” because in their eyes, Jesus is captivating, “his good example has moral authority” and his teachings help people’s lives, he said.

Later in the day, the pope was scheduled to celebrate the Holy Thursday Mass of the Lord’s Supper at a Rome prison and wash the feet of 12 inmates.

The text of the pope’s homily in English is posted online here and in Spanish here.

NEXT: Jesus does not give up on anyone, pope tells prisoners