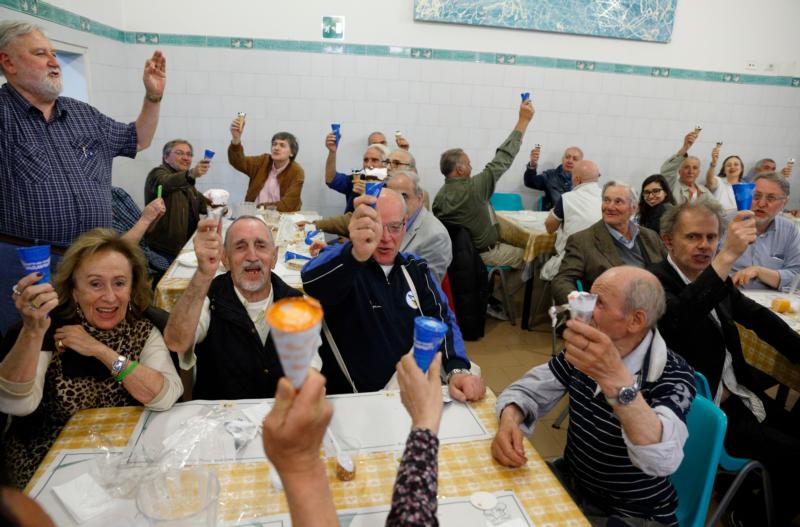 People raise their ice cream cones donated by Pope Francis as they toast the pope at a Sant’Egidio soup kitchen in Rome April 23. In honor of his name day, the feast of St. George, the pope donated 3,000 servings of ice cream to soup kitchens and homeless shelters around Rome. (CNS photo/Paul Haring)

ROME (CNS) — Cones raised in the air, the crowd gathered for dinner at the Sant’Egidio Community’s soup kitchen toasted Pope Francis on his name day, the feast of St. George.

The gelato was offered by the pope, born Jorge Mario Bergoglio, as part of his name day celebration April 23. He provided 3,000 servings of ice cream — mostly vanilla cones with chocolate and nuts on top, but also a few pistachio cones and a couple strawberry ones — to soup kitchens and homeless shelters around Rome.

“It’s not like gelato is the only thing he gives away,” said Ruggiero, who passed on the cones because, he said, at his age — 70-something — “I’m watching my physique.”

“Everything this pope does he does for the poor,” Ruggiero told Catholic News Service. “And then there’s his smile.”

Alberto, roughly the same age, was seated next to Ruggiero for the dinner, which began with a course of gnocchi, then moved on to the main course of veal and potatoes and would normally have finished with fruit. Oranges were the day’s offering.

“It’s a very charming gesture,” said Alberto as he unwrapped his cone at the kitchen in Rome’s Trastevere neighborhood.

The two men, along with five other friends, had begun their evening in the tiny Church of San Calisto, where they join in singing evening prayer and prayers for peace twice a month. Then they walk to the soup kitchen nearby for dinner.

One of the seven gentlemen wrote their names in big letters on the paper place mats to save their seats. But there is always room for one more. And they take turns filling each other’s water glasses, passing out the food and collecting the dirty plates before the next course.

Across the room, Antonino Siragusa was eating, but also helping to serve. He said he has met the pope “six times. He’s a good person, very lively. He smiles and will meet anyone.”

Before the meal began, he admitted he had not known it was the pope’s name day, but he was glad to hear it.

NEXT: Salvadoran archdiocese argues for Romero canonization in El Salvador