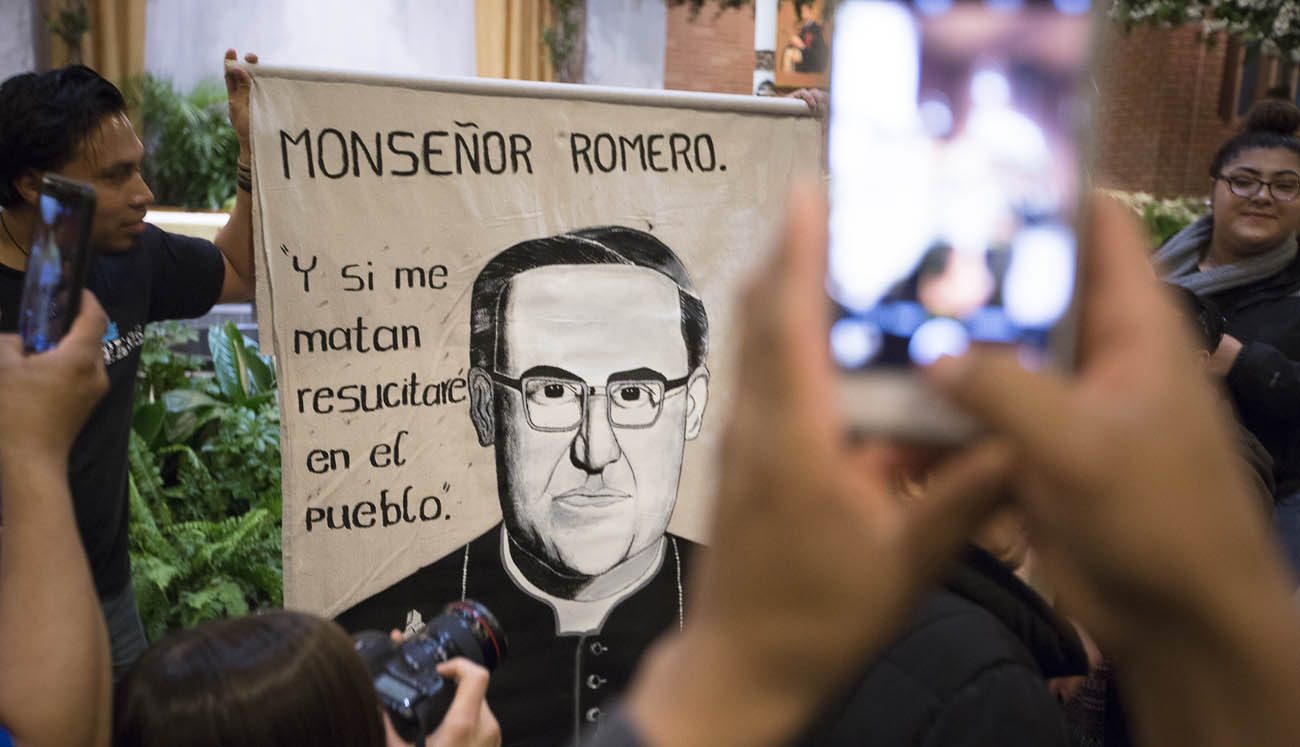 People take sellfies of an image of Blessed Oscar Romero April 10 at St. Camillus Church in Silver Spring, Md. During an April 11 homily in Washington, Salvadoran Archbishop Jose Luis Escobar Alas said the canonization of Blessed Romero will "probably" be in Rome and "probably" take place at end of October after a meeting of bishops. (CNS photo/Tyler Orsburn)

UPDATED – WASHINGTON (CNS) — During an April 11 homily in Washington, Salvadoran Archbishop Jose Luis Escobar Alas said the canonization of Blessed Oscar Romero will “probably” be in Rome and “probably” take place at end of October after a meeting of bishops.

He hedged his statement in an interview with Catholic News Service saying the final decision is up to Pope Francis.

“Soon we will have a canonization,” the archbishop said to a crowd of mostly Salvadoran immigrants gathered for Mass at the Shrine of the Sacred Heart. “On May 19, we will know the date and the place.”

That’s the date cardinals will gather at the Vatican for a meeting known as a consistory, where they’re expected to decide the details.

The archbishop’s statement came hours after reports that Honduran Cardinal Oscar Maradiaga said to members of the press in Madrid that the Romero canonization would take place Oct. 21.

El Salvador’s Cardinal Gregorio Rosa Chavez, who also was present at the Mass in Washington, referenced Cardinal Maradiaga’s statement and said, “Let’s wait until the official announcement” but also said the Honduran cardinal was close to the pope and may know details.

Archbishop Escobar, who occupies the post held for three years by Blessed Romero, from 1977 until his assassination in 1980, said El Salvador’s bishops sent the pope a message asking that the canonization be held in their country. Many of the country’s poor would not be able to otherwise attend the ceremony, a first for El Salvador, he said. Archbishop Romero’s May 2015 beatification took place in El Salvador. Ultimately, the pope will decide what to do, he said.

“In any case, he (Romero) will be canonized,” he said during the homily. “We are happy.”

The archbishop and the cardinal are part of a delegation of Salvadoran bishops seeking to meet in April with U.S. lawmakers to plead for relief for immigrants who have benefited from two imperiled U.S. immigration programs: Temporary Protected Status and Deferred Action for Childhood Arrivals. Their end would affect more than 215,000 Salvadoran nationals living in the U.S. under those protections, he said.

Archbishop Escobar told those gathered at Mass to pray for Blessed Romero’s intercession and a miracle so that lawmakers find a permanent solution and an answer to their pleas.

“We would like you to invoke (Blessed) Romero for his intercession in this miracle, a solution to this problem,” he said. “He is with us and intercedes for us.”

Blessed Romero was assassinated March 24, 1980, during Mass after repeatedly pleading for an end to violence, to injustice against the poor, and to the killing of innocent civilians during an armed conflict that ultimately lasted 12 years and resulted in more than 70,000 deaths in the country.

Some of those deaths included 20 Catholic priests, two bishops, including Blessed Romero, and men and women religious, as well as catechists and ministers, the archbishop said. One of them was Jesuit Father Rutilio Grande who is “en route” to beatification, he said.

The church of El Salvador also is working to recognize the other martyrs, he said, which include four American church women from Cleveland slain in the country late in 1980, months after Blessed Romero’s martyrdom.