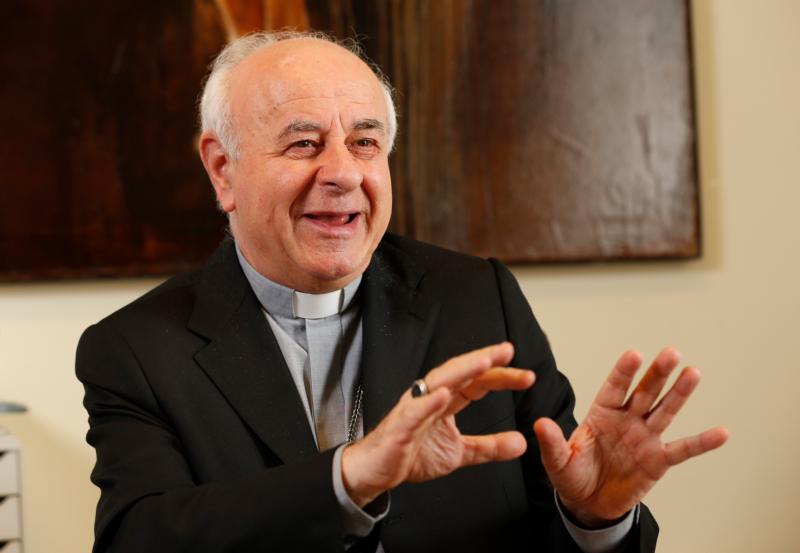 Archbishop Vincenzo Paglia, president of the Pontifical Academy for Life, speaks during an interview in his office at the Vatican April 17. Archbishop Paglia said Pope Francis, in his recent exhortation, “Rejoice and Be Glad,” was not trying to shift the focus away from abortion to poverty but rather was trying to show they are part of the same battle. (CNS photo/Paul Haring)

VATICAN CITY (CNS) — When Pope Francis insisted that the lives of the unborn and of the poor are “equally sacred,” he was not trying to shift the focus of Catholics from fighting abortion to fighting poverty, he was trying to show they are part of the same battle, said Archbishop Vincenzo Paglia, president of the Pontifical Academy for Life.

The life of the unborn must be “promoted and defended with great determination and given an effective priority,” the archbishop told Catholic News Service April 17.

“At the same time,” he said, “we must keep in mind that the dignity of every human being is equal and inviolable at every stage throughout his or her life.”

In “Rejoice and Be Glad,” his apostolic exhortation on holiness, Pope Francis wrote that living a Christian life involves the defense of both the unborn and the poor, and he criticized what he termed the “harmful ideological error” of thinking one’s own cause is the only important one.

“Our defense of the innocent unborn, for example, needs to be clear, firm and passionate, for at stake is the dignity of a human life, which is always sacred,” Pope Francis wrote. “Equally sacred, however, are the lives of the poor, those already born, the destitute, the abandoned and the underprivileged, the vulnerable infirm and elderly exposed to covert euthanasia, the victims of human trafficking, new forms of slavery, and every form of rejection.”

Pope Francis’ words reminded many people of the “seamless garment” approach to life issues promoted by the late Cardinal Joseph L. Bernardin of Chicago. While applauding its recognition of the sacredness of all human life, some people criticized the approach, saying it could give people a mistaken impression that, for example, the church teaches abortion and capital punishment are equally serious sins. Others worried that some Catholics would claim their defense of life in one area meant that they did not have to pursue the protection of life in other areas.

But “Pope Francis has reaffirmed that abortion is evil without mincing words,” Archbishop Paglia said. At the same time, he asks that “the pro-life commitment be enlarged.”

The pope’s words in the exhortation reflect the same vision the pope had in renewing the statutes and membership of the Academy for Life, he said; the pope believes “true support for life cannot be limited to isolated moments of its existence, but also must promote the conditions of justice and peace” life needs to thrive.

What Pope Francis is telling Catholics, he said, is “to be pro-life always, in every situation and everywhere, not only in one moment, in one country or one aspect. We must rediscover the prophetic call to defend life in its concrete situations, not as an abstraction, by defending human beings from the very beginning of life to its end.”

Rather than watering down Catholics’ commitment to ending abortion, the archbishop said, attention to defending life at every stage and in every circumstance “should make us stronger, including in effectively combatting the absurd prospect of abortion.”

By putting together abortion, euthanasia, hunger, immigration, the death penalty, weapons trafficking, war and other serious issues, he said, Pope Francis makes it clear that all human life always must be defended.

A prophetic pro-life stance, Archbishop Paglia said, “has no limits,” while an “ideological approach” zeroes in on particulars. “Ideology moves the mind, while prophecy moves the mind, but also the heart and the hands because it dares to dream of a future that is beautiful for everyone.”

“We must never do death’s job,” the archbishop said. “Never.”

PREVIOUS: Father of Alfie Evans meets pope, begs for help to save his son