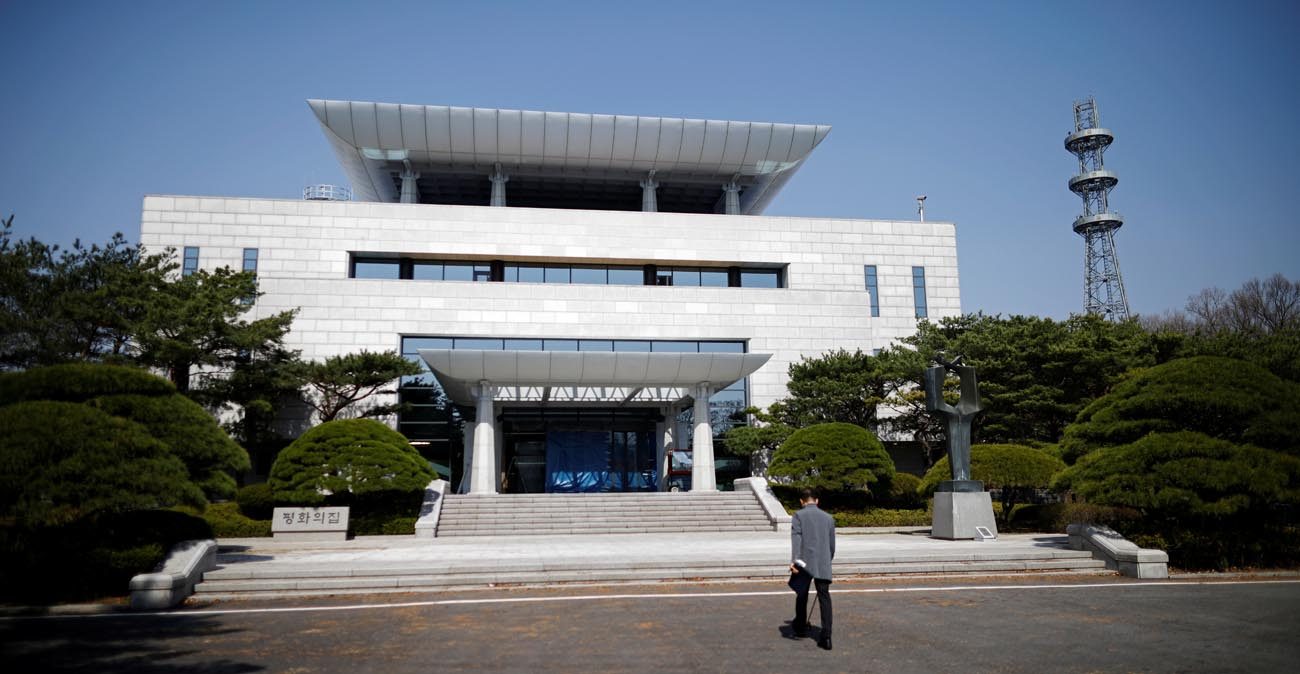 The Peace House, the venue for the summit between the Koreas, is pictured April 18 at the truce village of Panmunjom inside the demilitarized zone separating North and South Korea. Leaders of both Koreas will meet April 27 for a historic summit just inside South Korean territory. (CNS photo/Kim Hong-Ji, Reuters)

SEOUL, South Korea (CNS) — Bishop Peter Lee Ki-heon of Uijeongbu has been waiting years for this moment, with the leaders of the two divided Koreas poised to meet for a historic summit just inside South Korean territory April 27.

Ucanews.com reported Bishop Lee, president of the Korean bishops’ Committee for the Reconciliation of the Korean People, released a statement April 13 expressing his belief that the summit would end decades of struggle and open a new era of peace on the peninsula.

“Now the Korean Peninsula is entering an important time of turbulence,” Bishop Lee wrote in the statement titled, “Your will be done, on earth as it is in heaven.”

“With the inter-Korean summit, as well as the ensuing summit between North Korea and the U.S., expectations are growing that the 65-year-long confrontation and struggle will end and a new era of peace will come,” the statement read.

This will be the third major inter-Korean summit, decades after the Korean War ended in a cease-fire.

But both of those meetings ultimately went nowhere, with the signs of rapprochement crumbling only to be replaced by threats of war amid occasional volleys of gunfire across the Demilitarized Zone that separates the two countries.

Bishop Lee said he expects the upcoming summit will bear more fruit, aided by the prayers of parishioners.

“Our prayers are making an incredible miracle through God, who makes the impossible possible,” he said.

The Korean Catholic Church declared its “first of year of peace” in 2015 while commemorating the 70th year since Korea split. That campaign saw Catholics come together to pray for peace every day at 9 p.m.

“We still have many obstacles to overcome during the upcoming dialogue. Please keep praying for everlasting peace on the Korean Peninsula. Our solidarity in prayer will be a solid cornerstone for peace,” he said.

He also asked Catholics to check the “hostile” attitude that has crept into Korean society since the end of the Korean War.

“Due to the long ‘Cold War’ era in Korea, the hostile attitude against others has become deeply rooted in our society, and the church is not free from this scourge,” he said.

“The sense of struggle and divisiveness inside South Korean society is a huge obstacle to the future (success) of the Korean people.”

The upcoming summit will mark the first time a North Korean leader has set foot inside South Korean territory in decades. Kim Jong Un, North Korean supreme leader, is due to meet incumbent South Korean President Moon Jae-in in the South Korean side of the Joint Security Area, just south of the DMZ.

While much of the recent thaw in diplomatic relations has been cloaked in secrecy, it indicates a strong de-escalation following months of rhetoric between Kim and U.S. President Donald Trump, as both threatened each another with missile strikes.

Kim made a secret visit to meet Chinese President Xi Jinping in Beijing in the first week of April, his first trip outside North Korea since taking over the leadership.

Moreover, it recently came to light that Trump sent the head of the CIA on an equally secret meeting with Kim a few days later to pave the way for a summit between Trump and Kim, which is expected to take place sometime in May.

NEXT: Pope calls for end to ‘needless bloodshed’ in Nicaragua