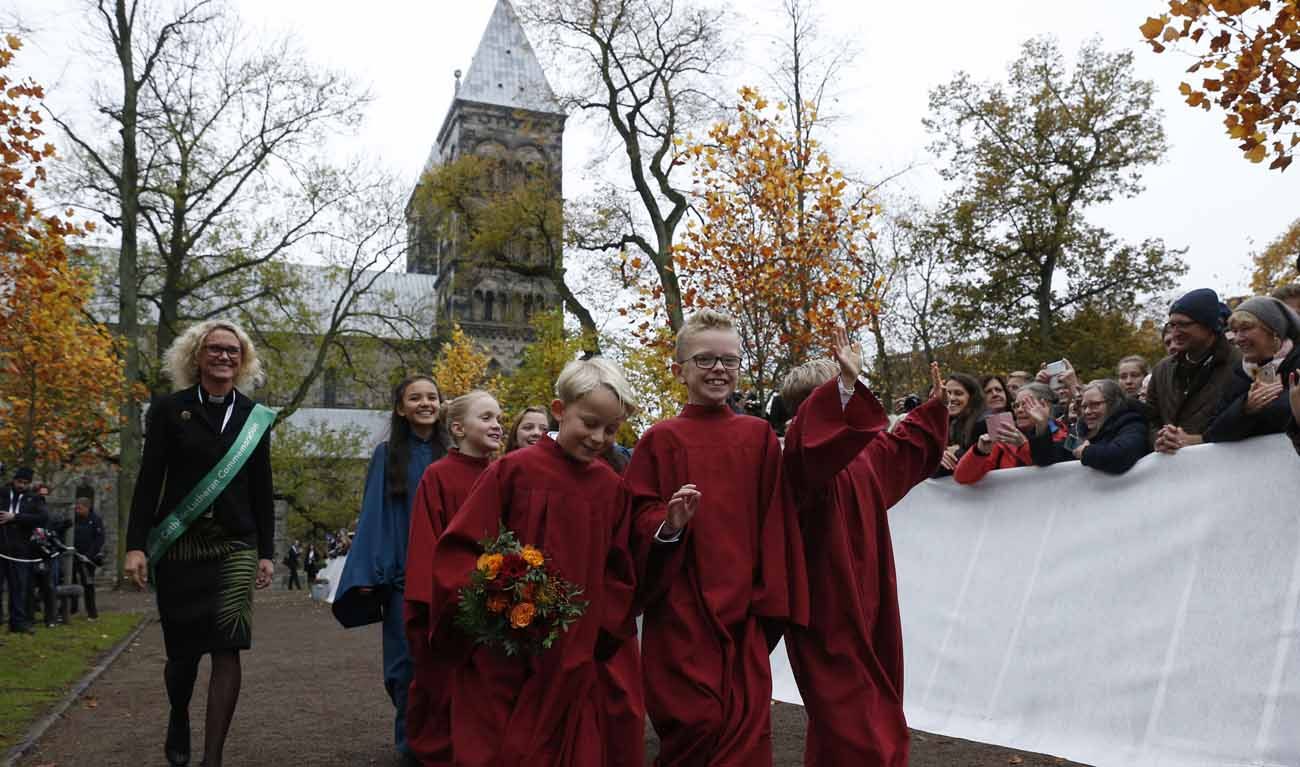 Children walk outside the Lutheran cathedral as they prepare to meet Pope Francis in 2016 in Lund, Sweden. For the first time in 500 years, Lutherans in Sweden are welcoming Catholics to celebrate Masses in the cathedral. (CNS photo/Paul Haring)

For the first time in 500 years, Lutherans in Sweden are welcoming Catholics to celebrate Masses in Lund cathedral. The historic cathedral, formerly the site of bitter religious feuding, has become a site of interfaith friendship since Pope Francis held a service there in 2016.

The agreement to allow Catholic Masses to be celebrated in the cathedral was announced in early April to accommodate the growing parish of St. Thomas Aquinas in Lund, which will be undergoing building renovations. Catholic services will be held there beginning in October until the renovations are complete.

“People are very excited,” said Dominican Father Johan Linden, pastor of St. Thomas Parish. “As I and my Lutheran counterparts have stressed, this is not merely a practical solution but a fruit of the Holy Father’s visit and the joint document ‘From Conflict to Communion.'”

The Catholic Diocese of Stockholm credits the church sharing to Pope Francis’ visit, saying the pope has had a direct impact in improving Christian relationships in Sweden.

“Since the visit of Pope Francis, the ecumenical relations between Lutherans and Catholics in Lund have developed and grown stronger,” said Kristina Hellner, diocesan spokeswoman. “The parishes don’t wish to focus on what is separating them. Instead they focus on what is uniting: the Gospel, baptism, prayer and diaconal care.”

Since the pope’s visit, Catholics and Protestants in Lund have also been holding common vespers together on Saturday evenings. The number of participants varies from 50 to 200, said Father Linden.

Lund is home to one of only three Catholic schools in Sweden.

“Our region is growing and Lund, a town with a major university and several important research projects, is growing at a fast pace,” said Father Linden, whose parish has about 3,500 registered members but serves about 5,000.

“Last time I tried to count, we had around 85 nationalities,” he said.

Now the small Catholic community has outgrown the building and found a new opportunity for fellowship with their Lutheran neighbors.

Father Linden said he believes that the experience is enriching, saying that goodness and beauty are found everywhere and can be particularly shared with Christians of other traditions.

“If we take Christ’s invitation to unity seriously, we must first and foremost seek the good, the true, the beautiful and cherish it. Be humble and recognize it,” said Father Linden, saying witnessing a different tradition can inspire people to grow in holiness.

“All this can and will be done without giving up our own tradition,” he added. “For us, our common ground of baptism and the Gospel means that we can do a lot to make God’s kingdom grow and become more visible in our secular society.”

PREVIOUS: With new document, pope shows holiness is for everyone, speakers say