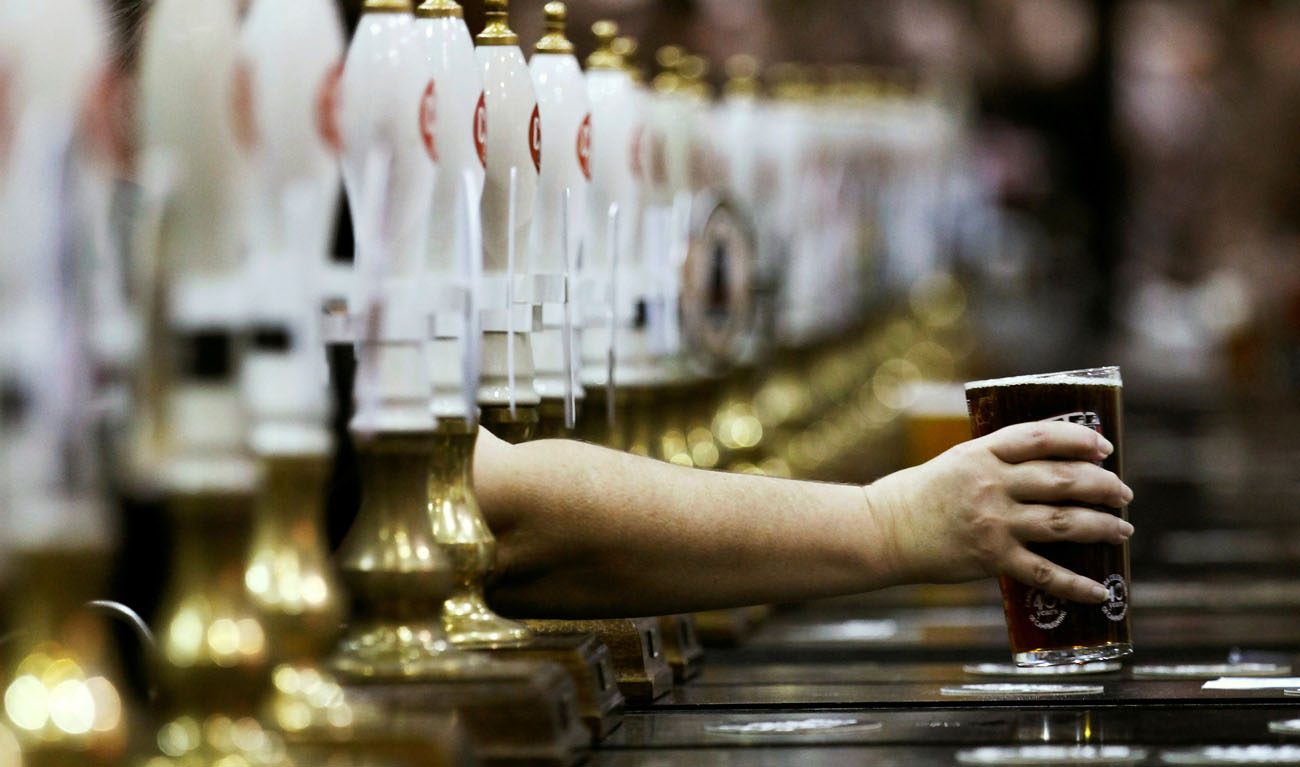 A pint of beer is served through rows of beer taps at a 2011 London beer festival. Around the country, Catholic Beer Clubs have been forming in response to millennials' thirst for community. (CNS photo/Luke MacGregor, Reuters)

MINNEAPOLIS (CNS) — Weeknight visitors to a Twin Cities craft brewery might stumble upon one of the newest young adult ventures in the Archdiocese of St. Paul and Minneapolis.

Although they wouldn’t necessarily know it.

There will be no telltale signs that an organized Catholic event is taking place: no speaker giving a catechetical talk, no priest fielding questions, no special reserved seating. Just a group of young Catholics casually chatting, laughing and getting to know one another, likely with a pale ale or stout in hand.

Which is exactly how the leaders of the local chapter of the Catholic Beer Club want it.

“Our goal is to provide not ‘just another Catholic event,’ but a casual forum for people to connect with others from all over the archdiocese,” said Isabel Brown, a parishioner at Holy Family Church in suburban St. Louis Park who coordinates the group with fellow Catholic millennials Tim Cahill and Wesley Sandholm.

The group has been holding local club get-togethers every few weeks since November at breweries around St. Paul and Minneapolis. Craft breweries’ open floor plans and flavorful beer selections lend themselves to the type of free-flowing, conversation-conducive gathering that organizers have in mind.

“There’s no program, no script, no secondary mission that we are trying to accomplish,” Cahill, a parishioner of St. Mark Church in St. Paul, told The Catholic Spirit, the archdiocesan newspaper. “The community is our agenda.”

The idea of bringing Catholic Beer Club, a national brand that now has chapters in more than 20 locales, to the Twin Cities was brewed up last fall, when Brown, Cahill and Sandholm met at the Archdiocese Young Adult Cookout. The three 20-somethings, who were each involved in young adult groups in different parts of the archdiocese, realized the need for more regular events that brought together millennial Catholics.

After some research, they discovered Catholic Beer Club, which was founded in Denver in 2014. Brown, Cahill and Sandholm were attracted to the simplicity of its model to building community and relationships.

They also recognized the benefits of tapping into a national network with an already well-established social media presence and brand identity, important qualities for attracting a young adult audience. After going through a CBC interview process that assessed their views on community and their commitment to the Catholic faith, they got the green light to organize events.

CBC-Twin Cities events typically draw more than 60 people, usually an even mix of men and women. Although “beer” is in the group’s name, non-beer drinkers are more than welcome. And though most attendees are faithful Catholics, conversation typically isn’t too theological, an attractive feature for some.

“It was fun to meet new people who share our faith, but we spent most of the time just talking about life and goofing around,” said Cecilia Miller, a 23-year-old parishioner of Holy Family Parish.

While CBC might not be a catechetical event where deep formation is provided, the coordinators believe the “low-bar of entry for newcomers” allows the group to play an important role in deepening attendees’ faith by pointing them to other young adult ministries.

“This is a platform where relationships are kindled, ideas are formed and people can dive more deeply into their faith,” said Sandholm, a parishioner of the Cathedral of St. Paul in St. Paul. The club’s coordinators often encourage attendees to check out parishes and young adult faith communities around the archdiocese.

Such suggestions are appreciated by Andrew Kuhrmeyer, 27, who recently became Catholic. Kuhrmeyer, who attends Mass at the cathedral, said CBC has been “a big blessing,” and it has helped him connect with the Catholic young adult scene.

“A good group of friends is good to have, especially when you’re growing in the faith,” he said, adding that he was invited to join a Bible study at the Basilica of St. Mary in Minneapolis through the group. “You want to walk the path with others.”

Liedl writes for The Catholic Spirit, newspaper of the Archdiocese of St. Paul and Minneapolis.