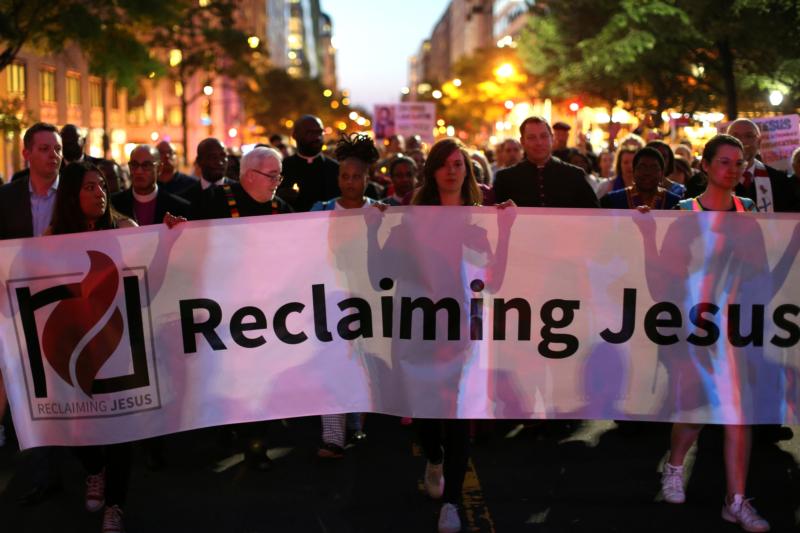 People carry a banner during an interfaith vigil titled “Reclaiming the Integrity of Faith During Political and Moral Crisis” May 24 outside the White House in Washington. (CNS photo/Jonathan Ernst, Reuters)

WASHINGTON (CNS) — Saying that Jesus Christ has been “hijacked” in the name of politics, a large crowd of national Christian leaders and members of their congregations vowed during a prayer service and vigil May 24 to “reclaim Jesus” from those who not only use his name for their political and personal gain, but reject the gentleness, kindness, love of neighbor, the poor and the truth that Christ embraced.

“We believe two things are at stake: the soul of a nation and the integrity of faith,” said the Rev. Jim Wallis, speaking to a crowd that overflowed onto the steps and street outside the National City Christian Church in Washington.

Rev. Wallis was one of the organizers of the “Reclaiming Jesus” event, which gathered Baptist, Catholic, Anglican and other Christian clergy for prayer, song and a quiet vigil outside the White House.

Religious leaders at the event spoke of the dehumanization of people around the country based on their race, economic status, immigration status, gender or because of the faith they practice.

While saying the event was “not about Donald Trump,” some criticized a culture of lies, disregard for truth, rule of law and denigration of the poor and marginalized by “political leadership.” Some also seemed to take issue with those seeking to use the name of Jesus and faith for personal gain.

“When Jesus’ name is forgotten or silenced or even co-opted, and used, when the integrity of faith is compromised for temporal political gain, that is not merely hypocrisy, that is idolatry,” said the Rev. Wallis.

Episcopal Bishop Michael Curry, who famously preached about love at the recent royal wedding of Meghan Markle and England’s Prince Harry, continued the theme of love at the event and said the reason so many attended the “Reclaim Jesus” event was because they believe in the teachings of Christ.

Bishop Curry said several Christian leaders gathered just before Ash Wednesday this year to figure out a way to “help Christian people, people of goodwill, to find their voice, to reclaim and renew the faith that Jesus has given us and to find a way to live that faith in our public lives and in the public square.”

That’s how the event was born, he explained.

The procession toward the White House, he implored, was not to be seen as a protest, but a procession of Christian people and one started by the early Christians.

“This is what they did on Pentecost, this is a Pentecostal moment, that’s what’s going on,” he said, adding that it was a manifestation that “we are committed to following the way of Jesus.”

“Jesus promises ‘you will know the truth and the truth will set you free.’ Therefore we reject the practice and pattern of lying that is invading our political and civil life,” he said. “The normalization of lying presents a profound and moral danger to the fabric of our society.”

Jesus’ way also means loving your neighbor, having respect for all creatures and also not bearing false witness, he said. The ninth commandment at Mount Sinai, he said, was “you shall not bear false witness.”

Lies can never lead toward the path Jesus wants for humanity, he said.

Franciscan Father Richard Rohr closed the event at the church with a prayer as he sent the group on the way to the candlelight procession.

“May you know the height and the length and the depth and the breadth, may you know the love that surpasses all knowledge, and may you walk in that love into the empire,” he said during the blessing.

On the grounds of Lafayette Park, a green space that faces the north side of the White House, Franciscan Father Joseph Nangle watched as the crowd filed in to pray in front the president’s residence.

Father Nangle missed the event at the National City Christian Church because he was hearing confessions at Our Lady Queen of Peace Church in Arlington, Virginia, but “I had to come,” he said, because he wanted to support the message of love and welcome that Christ stands for.

“I had to be part it,” he said of the event. “And I wanted there to be Catholic presence.”

Marie Dennis, co-president of the Pax Christi International Catholic peace movement, also was present for the vigil that included songs and some prayers. She said, she, too, felt that Jesus needed reclaiming, just as what he stood for needs reclaiming.

And some are using the figure of Jesus to justify policies and practices that go against what Christ stood for, she said. She was concerned about the lack of charity shown to immigrants and refugees, how the poor are being treated, and also the role of the U.S. at the international level when the country seems to be moving away from world peace, including by pulling out of the Iran nuclear deal.

A lot of what’s being said and done, and sometimes by those mentioning the name of Jesus, “is the opposite of the Christian message,” she said.

NEXT: Foothills of Ozarks resonate with Marian hymns at shrine on new feast day