Encuentro process inspires some to go to society’s peripheries 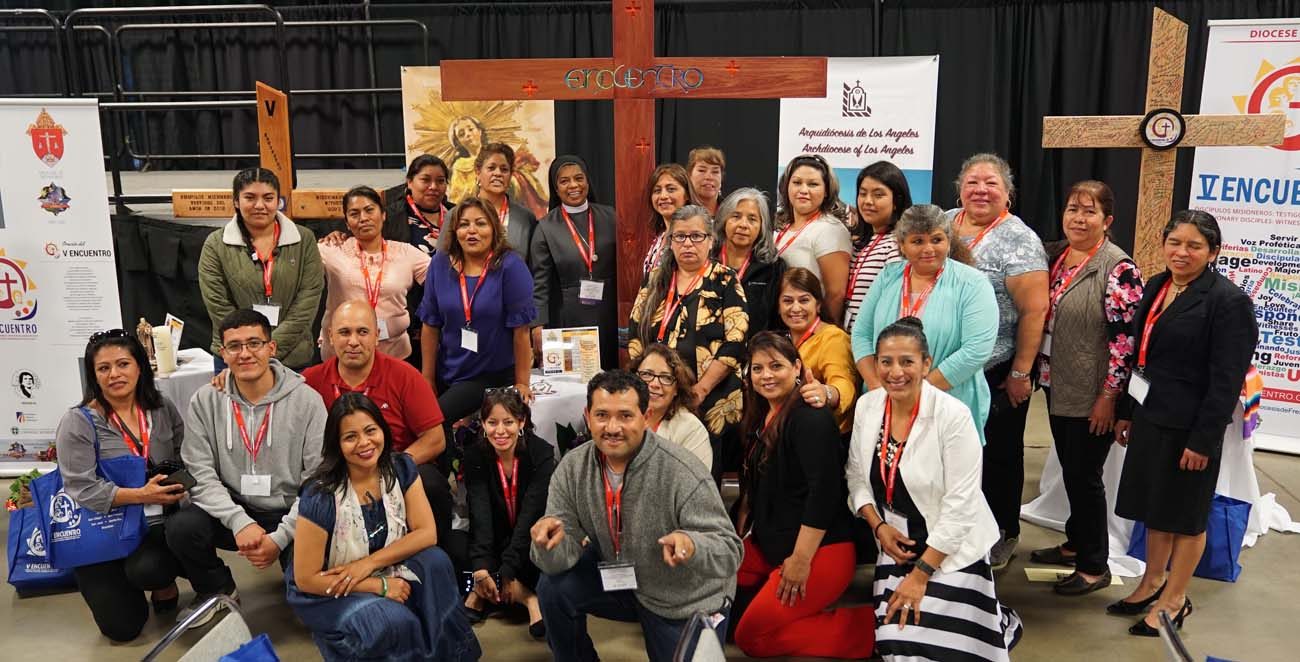 Some of the more than 400 delegates from the Los Angeles Archdiocese pose during a regional encuentro in Visalia, Calif. Clergymen and delegates representing 15 dioceses throughout California, Nevada and Hawaii, participated in several workshops during the April 27-29 gathering. (CNS photo/Ernesto Vega, Angelus News)

VISALIA, Calif. (CNS) — Going to the peripheries of society to encounter others has been a constant theme of Pope Francis’ five-year papacy.

At the April 27-29 regional Encuentro in Visalia, California, several of the 1,300 delegates discussed “primerear” (to reach out first) and how that leads to encounters, in this case homeless people.

“We were asked to go out to the peripheries, out of our prayer groups and small Christian communities,” explained Silvia Galdamez, who represents a missionary widespread movement started by the late Holy Cross Father Jose Pawlicki at St. Marcellinus Parish in Commerce, California.

As the homelessness crisis escalates in Greater Los Angeles and neighboring counties, the group did not have to go far.

The community reached out to homeless people in the church’s immediate neighborhood, asking their name and what they needed.

“They would tell us ‘Why did you stop? How come you are interested in me? Do you want anything?'” Galdamez told Catholic News Service.

Galdamez, a catechist since she was 14 years old in her native El Salvador, called the experience transformative.

“We realized that there is too much indifference,” she said. “Some would tell us ‘I grew up in a Catholic family, but when I got in trouble and my family threw me out.’ And ‘I also left the church and the church did not invite me back.'”

Since beginning the ministry the group has reached out to about 15 people.

Similar efforts were undertaken in Santa Barbara, where Jose Ramos, a parishioner of Our Lady de Guadalupe Church, felt called to evangelize.

“We went to Russell Park to preach,” said Ramos, who coordinates the parish’s Charismatic Renewal group. Members brought home-cooked meals and talked to the people at a house near the park.

Often, Ramos said, the food would stay on the plates as people would be engrossed in conversations about God. “They were happy to find nourishment in the word,” he said. “Many cried and asked for prayers.”

Ramos felt ashamed when the homeless people prayed not to be treated like trash.

“I was listening to my homeless brother and what they are experiencing, being rejected,” he said. “How can we call ourselves Christian and ignore them? We are treating them as less than but we don’t know what they cry in their hearts, the struggles they went through.”

Ramos said that he connected with peoples’ pain because at one time he too experienced extreme poverty.

“My grandmother raised me in Honduras and when she died I lived with people who would let me stay with them,” he said. “I know (homeless people) are suffering, they don’t have someone who can help them without judgment.”

Ramos’ own struggles encouraged him to help, not so much with material needs but the spiritual ones. “God was the one who helped me,” he said.

Inspired by the encuentro, Johnny Martinez, a second-generation Hispanic and a graduate student at Loyola Marymount University, started a homeless ministry in an area of downtown Los Angeles known as Skid Row.

“There are tents and tents and thousands of homeless people,” Martinez said. “I believe that if Jesus Christ incarnated himself again in 2018, no doubt he would go to Skid Row. So, as Christians, that is where we need to be.”

Martinez and his group shared food and evangelized on Easter. He said that many homeless people were touched by the idea of a loving God and the promise of salvation.

“Everyone needs God and there are so many obstacles for them in addition to God,” he said. “They need material help, psychological help, many of them are struggling with addiction.”

Martinez said he identified with many of the people who are seeking happiness in drugs and alcohol.

“That could have easily been me,” he said. “Until God caught me four years ago, I was into alcohol, drugs. I got a DUI (driving under the influence) by the time I was 18.”

Martinez said he had helped at shelters before, but it is different when relationships are formed. One day, after dropping off basic supplies for a homeless couple name Fox and Holly, Martinez and his girlfriend invited them for lunch.

“Everybody has a story that you don’t know until you make that personal connection with them,” he said.

NEXT: Rockford Diocese prepares for V Encuentro by thinking about the future