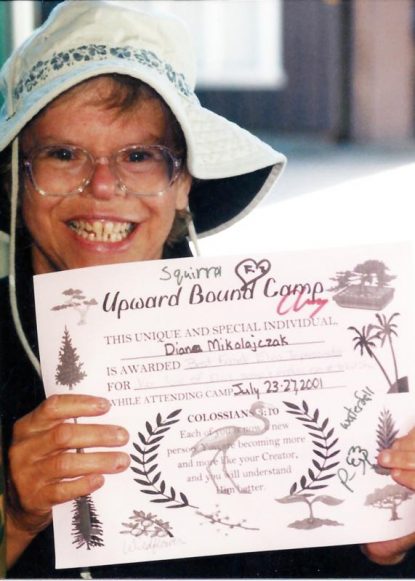 Diana Mikolajczak, pictured in 2001 with a certificate she received at Upward Bound, a Christian-based camp near Salem, Ore., for people with physical and cognitive disabilities. The camp provides disabled people the chance to know Jesus through creation and friendships. (CNS photo/courtesy Upward Bound)

It’s the classic hodgepodge of activities that countless children enjoy each summer. But for participants of Upward Bound, a Christian-based camp for people with physical and cognitive disabilities, the days not only bring laughs, exhaustion and friendships, they also help campers experience God’s love.

“We keep our philosophy simple,” Laura Pierce, Upward Bound executive director, told the Catholic Sentinel, newspaper of the Archdiocese of Portland. “It is our mission to communicate God’s love through providing quality care and experiencing the wonders of nature together.”

The 40-year-old camp is not affiliated with any denomination and welcomes everyone. Many Catholics help, including students from Portland’s Jesuit and Central Catholic high schools who volunteer each summer. Annually serving around 700 campers, ages 12 and older, Upward Bound draws participants from across the country.

“I see it as a pro-life organization, where people are being served who are often rejected by society,” said Aaron Thompson, Upward Bound board chairman and a parishioner of St. Juan Diego Parish in Portland.

Individuals with disabilities often are without a religious affiliation, according to Pierce. Reasons can include a lack of church-based programs that meet their needs and congregations’ discomfort with the mannerisms, movements or noises people with disabilities sometimes make.

“We are blessed to have an opportunity to make an impact on campers but also families, who are often isolated from a community of believers,” Pierce said. “We help give them hope and support to keep on keeping on.”

Kelsey Rea, coordinator of the Archdiocese of Portland’s Office for People with Disabilities, agrees. Although there are several adapted Masses for the special needs community in the archdiocese, the camp is “a great way for families to connect and network in a faith environment,” she said.

Amid swimming, paddle boating, dances and other traditional camp activities — adapted as needed — staff and volunteers share Bible stories and invite prayers each night. Staff teach campers the basics of prayer, but “they seem to know intuitively how to pray,” Pierce said. “One will stand up and say, ‘Yay, God! Thank you for the food.’ Another will pray for 10 minutes.” Each camper can connect with the divine in his or her own way, she said.

Nature can be a powerful, tangible way to know Jesus, Thompson said.

“Outside of the Eucharist and the liturgy, creation is the closest we get to God, in my mind,” he said. “Even in the liturgy God can be abstract for some individuals with disabilities. But nature speaks to everyone; anyone can find joy in jumping into cool water, listening to birds singing.”

Pierce said along with feeling God’s love, campers learn to realize the gifts they’ve been given and to share them while cultivating friendships.

“It’s a chance for them to be with others who will listen, friends who will just be silly with them,” she said.

Camps typically run five days in June, July and August. Some have a 5 to 1 staff ratio, while daylong sessions are available for medically fragile campers who need one-on-one assistance. The menu is catered to campers’ dietary needs, and there is a 24-hour on-site nurse.

Holiday-themed camps are offered throughout the year, and respite-care camps — providing caregivers a day to recharge — are held on an as-needed basis.

Pierce helped found the camp in 1979, and her husband serves as chaplain as well as “pretty much does whatever is needed,” she said.

Among those who continue to return is Diana Mikolajczak, 61, a member of St. Philip Benizi Parish in Creswell, Oregon, who has attended every summer for the past 18 years.

The only thing she talks about more than camp is her birthday, said her sister, Donna Silva. “The campers are treated as family,” Silva said.

Pierce recalled another camper, who started coming at age 16. The boy has cerebral palsy and communicates by using one finger to type.

Before Upward Bound, the boy’s mother told Pierce, every day during the summer he’d sit by his front window and watch the neighborhood kids walking past on their way to play ball. “He wanted them to ask if he’d like to go along, even if he couldn’t play, or ask him to come over for milk and cookies,” Pierce said.

Upward Bound is about “being connected, being part of a community where people like this boy can come to,” she said. “It’s about never feeling like you are a window-sitter.”