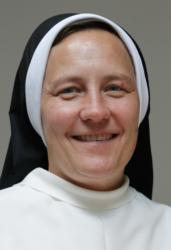 Sister John Mary Fleming, a member of the Dominican Sisters of St. Cecilia Congregation in Nashville, Tenn., is seen in this 2012 file photo. (CNS photo/Bob Roller)

WASHINGTON (CNS) — When Dominican Sister John Mary Fleming looks at the big picture of Catholic education in this country, she does it in typical educator fashion — recognizing what works and what needs to improve.

And as she sees it, Catholic education is doing well, but it also needs to be promoted, encouraged and often steered back to what sets it apart in the first place.

Sister John Mary, a member of the Dominicans’ St. Cecilia Congregation in Nashville, Tennessee, has seen all angles of Catholic education, as high school principal, director of education for her religious congregation and a college interim vice president of operations before starting her position six years ago as executive director of the Secretariat of Catholic Education for the U.S. Conference of Catholic Bishops.

Her last day in the post with the U.S. bishops was May 18. Her successor has not been named, but she will still be closely aligned with Catholic education, returning to her order’s motherhouse in Nashville with its apostleship of education and working “as the community sees fit.”

She said she “thoroughly enjoyed” the past six years working with the bishops, the USCCB staff in the education office and partnerships with National Catholic Educational Association and the Council for American Private Education.

“The Lord has outdone himself in generosity on every occasion,” she added in a May 11 interview with Catholic News Service, in an office prepared to be emptied but still full of plenty of books.

Two years into her new position, the bishops’ Catholic education secretariat presented areas of focus and concern to the U.S. bishops at their 2014 annual meeting. These key points — enrollment, outreach to the Latino community, Catholic identity, and governance and finance of Catholic schools — continue to be discussed today in evaluating progress or areas that still need attention, she said.

A key challenge for Catholic education, which the Dominican Sisters of St. Cecilia are particularly committed to and offer retreats and workshops about, is the faith formation of faculty and staff.

The order, often called the Nashville Dominicans, is one of the fastest growing communities of religious sisters in the country with steady growth since the 1980s. Founded in 1860, and dedicated to the apostolate of education, the sisters currently teach more than 17,000 students from preschool to college, primarily in the United States but also in Ireland, Italy, Australia and the Netherlands.

Nashville Dominican sisters were among the women religious who taught at the high school Sister John Mary attended — Providence High School in New Lenox, Illinois — a Joliet diocesan school at the time that is now run by the Augustinian order.

Sister John Mary has said she likely wouldn’t be a sister had it not been for the example of these women religious who “debunked the myth that living a faith-filled life was not a happy thing.”

During her tenure at the USCCB, a big issue was parental choice in education. But there were several other areas for discussion with the nation’s Catholic school superintendents. For example, when she began in 2012 there was a lot of talk and confusion about the Common Core State Standards and how they would be implemented, or not, in Catholic schools.

In response, her office published in 2014 a nine-page resource of questions and answers about the use of the Common Core that was used by school superintendents and state Catholic conference directors as part of professional development.

A key part of the document was its point that Catholic schools were not required to use these standards but could implement them in whole or in part if local schools “judged them to be of assistance to the academic quality of the Catholic school without detriment to its mission and purpose.”

This past year, Sister John Mary fielded a number of calls from superintendents asking how schools should respond to the school walkouts planned nationwide in response to the deadly school shooting in Parkland, Florida, and in protest of the nation’s gun laws.

Most Catholic schools across the country did not sanction walkouts, but instead held prayer service or advocacy sessions.

The focus is in “keeping with who we are as people of faith and a community of believers,” said Sister John Mary who sent Catholic school superintendents an email acknowledging that “many dioceses have chosen to support student participation in this important dialogue and discussion through a clear presentation of Catholic social teaching and peaceful civic engagement.”