Pollster: Religion can serve as moderating force in politics 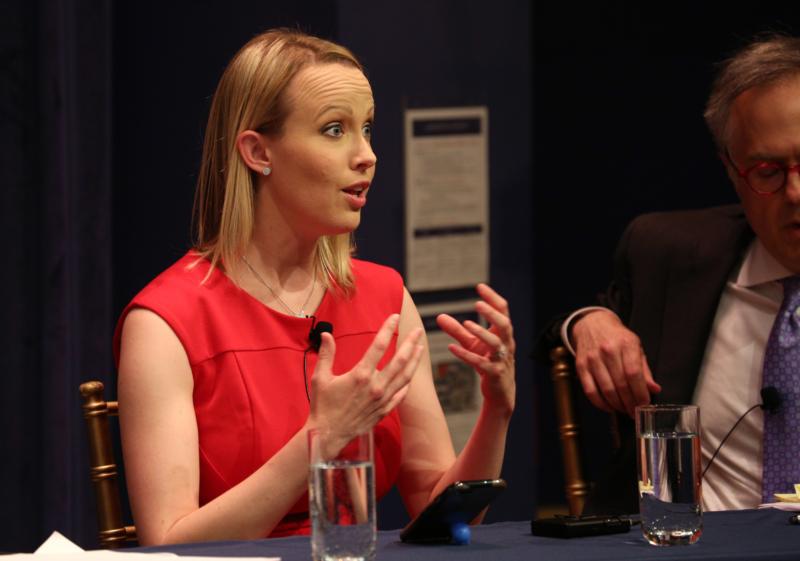 Emily Ekins, pictured May 14, is a research fellow and director of polling at the Cato Institute in Washington whose work covers the Tea Party movement, moral values and public policy. She took part in a panel discussion about “Faith and the Faithful in the Republican Party” at Georgetown University. (CNS photo/Shimeng Tong via Georgetown University)

WASHINGTON (CNS) — On the internet, as in society, some blame religion for intolerance. But a set of data gleaned from those who voted in the contentious 2016 election in the U.S. found otherwise.

“The stereotype is that those who attend church are less tolerant, when in fact, we are seeing the opposite,” said Emily Ekins, director of polling at the libertarian Cato Institute, during a May 14 panel about “Faith and the Faithful in the Republican Party” sponsored by Georgetown University’s Initiative on Catholic Social Thought and Public Life and the Institute of Politics and Public Service.

Ekins explained the religion-based factors that played a part in the 2016 presidential election. One was a dramatic increase in the number of people who left organized religion and who did not subsequently identify with a particular religious denomination, she said.

“That number has quadrupled among the general public, but has tripled among Republicans,” she said.

Ekins, who looked at data about Trump voters, said the information provided detailed information of people who attended church a lot, a little bit, occasionally, or not at all.

“What we found is that (Trump voters) who attended church more regularly tend to have more favorable opinions of racial minorities, African-Americans, and Hispanics, compared to Trump voters that never attend church,” she said.

And when asked, “How important is it to accept people from diverse religious and racial backgrounds?” Trump voters who attend church regularly are more than twice as likely to say it is important to do so than those who do not go to church, she said.

On the other hand “the more frequently someone conservative attends church, the less likely they are to have warm feelings” toward gay and lesbian individuals, she said.

The increasing number of people who have left organized religion over the past two decades is playing a role, she said, but it’s by no means the only factor in the rise of a candidate with views such as Trump’s.

“What research has shown is that, particularly among conservatives, people have a desire for community. If they are not getting that community from some sort of church, synagogue, mosque, whatever it is, they are going to look for it elsewhere,” she said. “What we’re seeing is that those who are not attending church regularly and are lacking community, they are tending to draw the boundaries at the level of the nation, or at the level of their racial group.”

A core group of enthusiastic Trump supporters, but by no means representative of all of them, she said, “believe that to be truly American means you need to be of European descent, which is very troubling. For these individuals, they were the least likely to go to church.”

They have redrawn the lines of their community on the basis of immutable traits, she said.

“And that, I think, is toxic to having consensus and compromise and having a public policy that works for all people,” she said, but the lack of community once found in faith groups is affecting the way some may see the world.

“Religion seems to be playing a moderating force within the conservative movement among Trump voters. But, at the same time, fewer Republicans are attending church regularly,” she said. “The very force that could actually moderate some of these cultural conflicts is receding and I think that that is contributing a lot to what we saw play out in the 2016 election.”

The information came from a 2017 survey of 8,000 voters by the Democracy Fund Voter Study Group.

NEXT: Conservatives: A link to Trump brings risk for faith communities