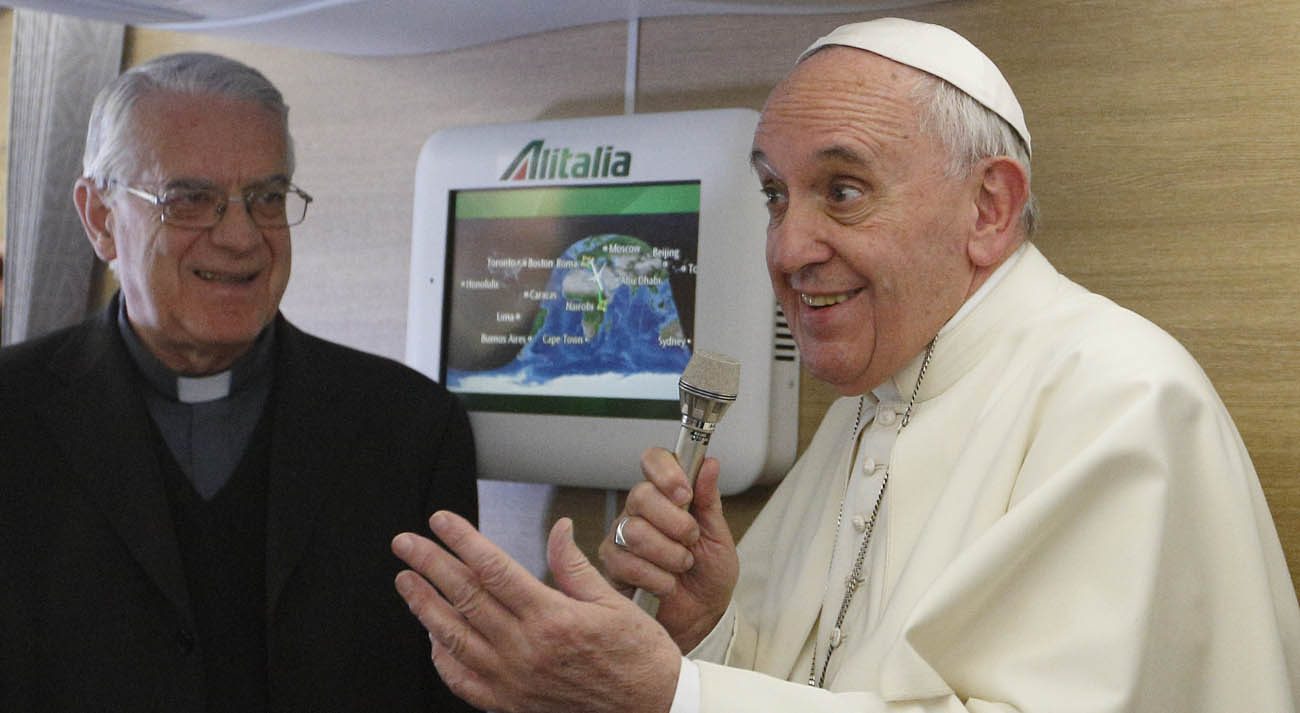 Jesuit Father Federico Lombardi, papal spokesman, looks on as Pope Francis talks to journalists in 2015 aboard his flight from Rome to Nairobi, Kenya. The retired papal spokesman says Pope Francis' communications style differs from Pope Benedict's but both papacies reflect continuity based on pontiffs' understanding of the church. (CNS photo/Paul Haring)

NEW YORK (CNS) — Despite the stark differences in their communication styles, the papacies of retired Pope Benedict XVI and Pope Francis reflect a continuity based on their understanding of the church as united by the risen Lord and guided by the Holy Spirit, said Jesuit Father Federico Lombardi.

Father Lombardi, longtime director of Vatican Radio and the Vatican Television Center, spoke at Fordham University May 15 about his experiences as Vatican spokesman under Pope Benedict and Pope Francis. Father Lombardi retired in 2016.

“The vision and experience of the reality of the church, led by the Spirit of the Lord, is the most profound and powerful element of continuity between the different popes,” the priest said.

Pope Francis leans on the solid foundation of the church’s consolidated teaching, particularly the Catechism of the Catholic Church and the Compendium of the Social Doctrine of the Church, and “has no intention of putting into question its substance,” Father Lombardi said.

“Indeed, precisely because he feels himself so squarely and stably ‘on the shoulders of giants,’ he thinks he can and must look forward and launch new messages,” he said.

The novelty of Pope Francis’ pontificate is in its pastoral-missionary perspective and radically evangelical inspiration, according to Father Lombardi. The current pope finds the “heart of the Gospel” in its message of mercy and forgiveness, and sees joy and hope as the unmistakable sign of the work of the Spirit in the world.

Father Lombardi said the greatest specific grace of this pontificate is that “many — among the practicing faithful, among those who have turned away from the church and among those who have never been part of it — have had their hearts touched by a word of comfort and hope. Many priests and believers have taken courage and confidence in proclaiming the good news, the Gospel of the Lord.”

Popes Benedict and Francis came to the papacy from different backgrounds and in different times, which influenced the way they interpreted their mission, Father Lombardi said.

“As a man of faith and intellect, Benedict saw his mission as consisting in constantly and patiently re-proposing the fundamental points of orientation: God, the God of whom the Bible speaks, a God who is at the same time logos, creative reason and love.”

Pope Francis’ perspective as the first Latin American pope does not negate any of his predecessor’s insights, “but makes possible a revival of the church’s service in the world with a new dynamic,” Father Lombardi said.

The principle that “reality is better seen from the periphery than from the center” informs Pope Francis’ understanding of the contemporary world and its “throwaway culture” that focuses on economic interest rather than the dignity of the human person, he said.

Father Lombardi said the quest for forgiveness, purification and conversion permeated the church’s history in recent decades, particularly with the ‘shocking emergence of the problem of sex abuse in the church in all its gravity.”

As a close witness of Pope Benedict’s pontificate, Father Lombardi said he is convinced the pope did everything possible to respond to the crisis with honesty and seriousness, and show the right path to the community of the church.

The pope “never sought to hide or minimize the enormous specific gravity of this crime when committed by church ministers” and “paid the price” for speaking the truth, he said.

Pope Francis continued in a “path already trodden” and most recently became “more deeply involved in the dramatic story of the church in Chile, with a very courageous recognition of errors he himself made in dealing with it,” Father Lombardi said.

He said it is significant that Pope Francis talks about abuses of power and conscience as well as sexual abuse. “The confrontation of evil in the life of the church is broadening, and awareness of its complexities and interconnections increasing,” he said.

As an example of the different styles of the two popes he served, Father Lombardi said he attended a brief meeting after each pope’s audience with a head of state or prime minister to receive information and essential details for subsequent communiques.

Pope Benedict would routinely give a two-minute summary “with extraordinary clarity, offering some points on the content of the interview,” he said.

“Pope Francis did not speak to me about the contents, not spontaneously, but about the personality of his interlocutor: his attitude, what he had said about himself, his human traits and the climate of the dialogue,” he said.

Father Lombardi said while the two popes are mindful of the media coverage of their papacies, neither one is influenced by public opinion to change a well-considered position.

He said Pope Benedict’s resignation in 2013 was not a surprise to him because the pontiff had told an interviewer several years earlier a pope could or must resign if he did not have the strength necessary for the position.

Father Lombardi said the pope’s “insistence” against anti-clericalism is beneficial to promoting participation by lay women and men at high levels of the church. He said Pope Francis’ recognition of St. Mary Magdalene in 2016 as “Apostle of the Apostles” is an important insight into the pope’s understanding of the role of women in the church.

Father Lombardi’s visible role as papal spokesman earned him the tongue-in-check nickname “Microphone for God,” according to David Gibson, director of the Fordham Center on Religion and Culture, which hosted the event.