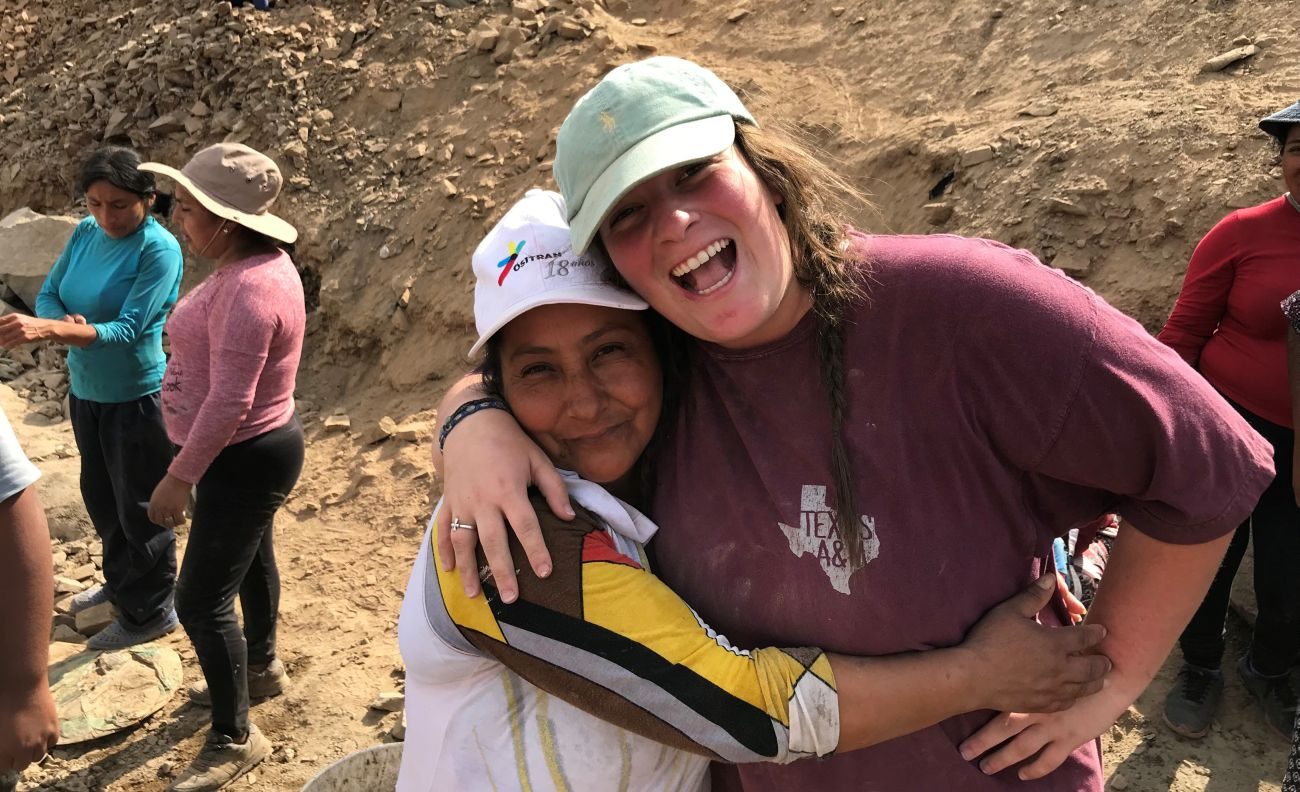 Macie Weaver, a missionary with the Fellowship of Catholic University Students, right, and Pamplona resident Blanca embrace at the work site in Peru. Weaver, a junior at the University of Louisiana-Lafayette, and nearly 240 people traveled on 11 spring break trips to serve the people of Pamplona Alta, one of the poorest neighborhoods in Lima, working alongside members of the Christian Life Movement. For the coming academic year, FOCUS plans 16 trips to Peru. (CNS photo/courtesy FOCUS)

DENVER (CNS) — In March, Ryan Clydesdale was looking forward to heading to Hawaii with friends for spring break, “but deep down I kept feeling pulled” to do something else.

That something else was to be part of a Peru mission trip sponsored by the Fellowship of Catholic University Students.

“I really felt like God was pushing me to go,” said Clydesdale, a student at the University of California Los Angeles.

“Josh (a FOCUS missionary at UCLA) kept inviting me until I finally said yes,” he said. “I was a little nervous at first because it was my first mission trip, but I knew the Lord was asking me to go and serve.”

This March, nearly 240 people traveled on 11 spring break trips to serve the people of Peru’s Pamplona Alta, one of the poorest neighborhoods in Lima, working alongside members of the Christian Life Movement. For the coming academic year, FOCUS plans 16 trips to Peru.

FOCUS officials say that such short-term mission trips are one way the organization aims to answer Pope Francis’ call for Catholics to “have the courage to go against the tide of … the culture of exclusion, of rejection.” That call came in his address to clergy during World Youth Day in Rio de Janiero in 2013.

Such a culture “is spreading,” he said. Today, “there is no place for the elderly or for the unwanted child; there is no time for that poor person in the street,” he said. In response, people of faith must “be servants of communion and of the culture of encounter!” the pontiff said.

Many students return from the FOCUS trips transformed in their faith and inspired to serve others. Clydesdale is no exception.

“The people in Pamplona changed me the most. Their physical poverty was very real, but their joy, gratitude and generosity were incredible to experience,” he said. “There was no running water, cramped living quarters and a giant hill they had to climb every day, but their spiritual wealth was obvious. I never expected to be so fulfilled to wake up early for Mass and then work alongside them all day under a hot sun.”

He and others in his group helped local volunteers build stairs in Pamplona. They “spent days mixing concrete, hauling it up the hill and pouring the stairs,” he explained.

But there was time to participate in Holy Week activities, “such as a Spanish rosary and Mass with the local families. On Good Friday, I was able to use my EMT training and work in the walk-in clinic for the community.”

The experience changed him as a Catholic, he said.

“Before this, I would say I was a nominal Catholic,” Clydesdale explained, “but now I feel proud to be a Catholic and I am excited to share my experience with others. I have real ownership of my faith now and I am getting more involved with the Catholic events on campus.”

Macie Weaver, a junior at the University of Louisiana-Lafayette, said she returned home from the FOCUS with “a greater desire to serve people at home.”

“Every day we made a difficult hike up the mountain to Pamplona. We worked with the people to build a wall to protect their houses from mud slides and rocks, and it was amazing to see the ways our hard work went directly to this community to leave a real impact,” she said.

She described the “significant impact” a woman named Blanca living in Pamplona had on her.

“We worked and laughed together every day. When we said goodbye, she gave me a hug and said I would always be in her heart and I was moved to tears,” Weaver said. “I will never forget her friendship! I was also really impacted by the daily adoration and Mass, as well as spiritual direction from the chaplain who came with us.”

“I connected on such a personal level with Blanca and others in Pamplona. As we worked side-by-side, we opened our hearts to each other and shared personal stories,” she added. “I realized I am called to love all the people in my life that same way. I’ve also learned to listen more to God in prayer.”

In Peru, Weaver said, she learned “Jesus has given me a real desire to be a missionary and I’m now looking into missionary organizations to serve in after I graduate.”

Josh Paiement is the FOCUS missionary at UCLA campus who invited Clydesdale to do the mission trip to Peru. He also was in Peru with Clydesdale and other students. The experience reinforced what he has long believed about the work of the Holy Spirit in our lives.

“The coolest part of going as a missionary was being re-convicted by how the Holy Spirit can transform lives!” he said. “On campus throughout the year, progress can be gradual, but on mission it happens in a powerful way in a short amount of time.”

“On mission,” he added, “the distractions of social media and school work are replaced with service and time for prayer and reflection.

This academic year, FOCUS Missions is sending over 2,000 participants on more than 130 trips around the world. Most participants are students, and each trip includes a chaplain and four FOCUS missionaries from the 137 campuses on which FOCUS serves. Please pray for all the trips participants this summer who will serve in Peru, as well as the 37 other countries throughout the world.

A full list of FOCUS missions is available at focusmissions.org.