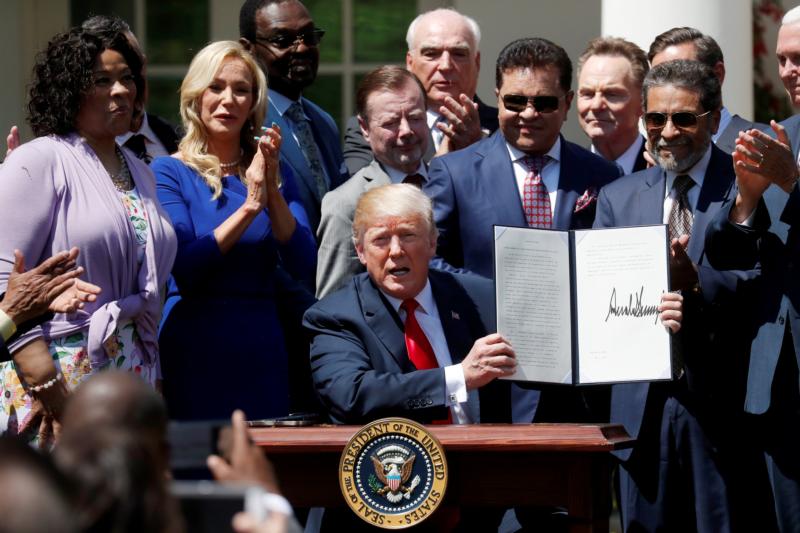 President Donald Trump holds up an executive order he signed during a White House ceremony May 3 to establish a faith-based office, the White House Faith and Opportunity Initiative. (CNS photo/Leah Millis, Reuters)

WASHINGTON (CNS) — In front of a small crowd of cabinet members and religious leaders at the White House Rose Garden May 3, President Donald Trump announced, and then signed, an executive order giving faith-based groups a stronger voice in the federal government.

“It’s a great day,” he said after signing the order and passing out pens to religious leaders who surrounded him outside on the spring morning for the National Day of Prayer event.

No details about the order were given at the ceremony, but religious leaders were reminded of the work they do in caring for those in need and were assured by the president that their religious freedom would continue to be protected by the federal government.

A White House document posted online after the order was signed said its purpose was to ensure that faith-based and community organizations “have strong advocates” in the White House and the federal government.

It said the “White House Faith and Opportunity Initiative” would provide recommendations on programs and policies where faith-based and community organizations could partner with the government to “deliver more effective solutions to poverty.”

It also pointed out that the new office would enable the Trump administration to know of failures, within the executive branch, of complying with religious liberty protections and would ensure that faith-based organizations have “equal access to government funding and equal right to exercise their deeply held beliefs.”

The initiative will be led by the newly created position of adviser to the White House Faith and Opportunity Initiative and will be supported by community and faith leaders outside of the federal government. It will have designated liaisons from executive departments and federal agencies.

A faith-based office is not new to the White House. Previous administrations, including those of Presidents Barack Obama and George W. Bush, had similar offices.

Jonathan Reyes, Assistant General Secretary for Integral Human Development for the U.S. Conference of Catholic Bishops, said his department looks forward to working with the White House on this initiative and hopes it will “continue to have the freedom and the space to serve the least of these, as the Gospel mandates.”

“Overcoming poverty and challenging other social problems like the opioid crisis takes all hands on deck,” he said in a May 4 statement, adding that faith communities have collaborated with government partners in this country at the federal, state, and local levels for a very long time.”

The May 3 ceremony to announce this office began with a series of prayers, led first by Vice President Mike Pence, who also told the crowd that he and the president frequently have people telling them: “We’re praying for you.”

He said the Bible “tells us to persevere in prayer” and noted that the American people do this every day and would do this in a particular way during the National Day of Prayer when many would “bow a head or bend a knee” to pray for the nation.

Pence told the crowd that “believers of every background have a champion in President Trump,” and he reminded them of Trump’s executive order signed a year ago, also in a Rose Garden ceremony, which he said assured people of faith that “no one would be penalized for their religious beliefs.”

The new executive order takes that a step further, he added.

Washington Cardinal Donald W. Wuerl, one of several faith leaders to deliver a prayer from a podium on the White House lawn, prayed that people would have the grace to stay close to God and one another. He also prayed for government leaders and for believers to have the strength and courage to stand up for their faith.

Trump said prayer has “forged the identity of this nation” and has also sustained it.

NEXT: Listening is key to bishops’ committee against racism, says new chair