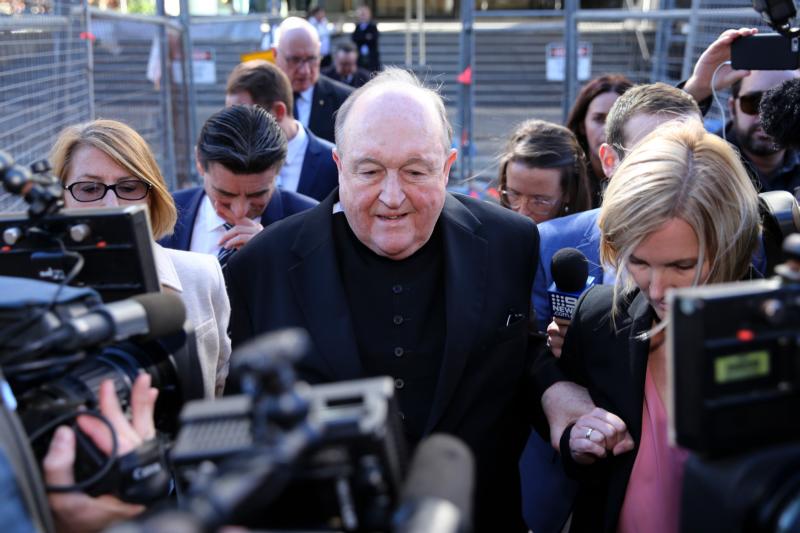 Archbishop Philip Wilson of Adelaide, Australia, leaves the Newcastle Local Court May 22. Archbishop Wilson, who was convicted of covering up clergy sexual abuse, says he will consult his lawyer before he decides next steps. (CNS/Peter Lorimer, EPA)

UPDATED – ADELAIDE, Australia (CNS) — Archbishop Philip Wilson of Adelaide, who faces a maximum penalty of two years in jail for failing to inform police about child sexual abuse allegations, said he will stand aside from his duties as archbishop while he considers how to proceed legally.

In a statement May 23, the archbishop said he was arranging for management of archdiocesan affairs and would step aside as of May 25.

“If at any point in time it becomes necessary or appropriate for me to take more formal steps, including by resigning as archbishop, then I will do so,” Archbishop Wilson said.

“In the meantime, while the remainder of the legal process runs its course, I want to assure the Catholic faithful in the archdiocese of my continued prayers and best wishes and assure everyone that the affairs of the archdiocese will be appropriately managed in my absence.”

The local court in Newcastle found that, in 1976, then-Father Wilson had been told by a 15-year-old boy that he had been indecently assaulted by a priest who later died in prison, but that Father Wilson chose not to go to the authorities despite believing the allegations were true.

In a statement May 22, Archbishop Wilson, 67, said, “I will now have to consider the reasons (for the conviction) and consult closely with my lawyers to determine the next steps.”

The sentencing is expected in June.

“Archbishop Wilson maintained his innocence throughout this long judicial process,” Archbishop Mark Coleridge of Brisbane, president of the Australian Catholic Bishops’ Conference, said in a statement.

Archbishop Wilson is the highest-ranking church official to be convicted of covering up abuse charges. He recently was diagnosed with early stages of Alzheimer’s disease, and throughout the magistrate’s hearing he testified that he had no memory of the conversation.

In February 2017, in testimony before a government commission wrapping up more than three years of investigation into the Australian Catholic Church’s response to child sexual abuse, Archbishop Wilson said: “Part of the difficulty that we’ve had in responding to this crisis about sexual abuse was simply based on the fact that people just didn’t know and understand what they were dealing with. … I don’t think they really understood the nature of sexual abuse of children and the effect that it had on the children.”

The Royal Commission of Inquiry Into Institutional Responses to Child Sexual Abuse, announced in 2012 and launched in 2013, investigated allegations of sexual and physical abuse across dozens of institutions, including schools, sports clubs and several religious organizations.

In his May 22 statement, Archbishop Coleridge said: “The Catholic Church, like other institutions, has learned a great deal about the tragedy of child sexual abuse and has implemented stronger programs, policies and procedures to protect children and vulnerable adults.”

“The safety of children and vulnerable adults is paramount for the church and its ministries,” he said.

On May 1, after a monthlong pretrial hearing, an Australian judge ordered Cardinal George Pell, on leave as head of the Vatican Secretariat for the Economy, to stand trial on multiple charges of sexual abuse of minors, charges the cardinal consistently has denied.