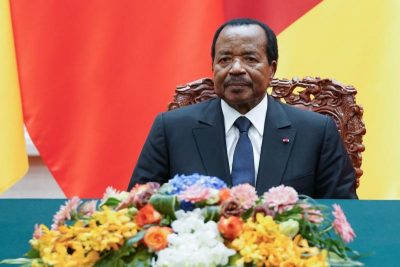 YAOUNDE, Cameroon (CNS) — The Catholic Church in Cameroon said shots were fired at the residence of Archbishop Samuel Kleda, bishops’ conference president, after he criticized policies by the government of President Paul Biya.

“Projectiles were shot at the Archdiocese of Douala headquarters, breaking its windows,” the local vicar general, Msgr. Dieudonne Bayemeg, said in a statement. “There were no human injuries, and the police arrived immediately, accompanied by the archbishop, cathedral rector and household guards.”

The statement, issued after the late-evening May 3 attack, said the bullets hit the room of the archdiocesan finance officer, Msgr. Alan Nibile, who threw himself on the floor.

It added that inquiries were continuing and said Catholics in the central African state had been asked to “pray and remain calm.”

Meanwhile, the Actualite du Cameroun news agency described the attack May 7 as an “attempted assassination” and said it was widely believed linked to Archbishop Kleda’s demands for a government dialogue with separatist groups and for Biya not to seek re-election.

Since 2016, army units have also been deployed against separatists in Cameroon’s English-speaking Southwest and Northwest regions. The separatists have declared an independent state, “Ambazonia.”

In a Dec. 5 interview with Cameroon’s La Nouvelle Expression magazine, Archbishop Kleda urged Biya, in power since 1982, not to run for a fifth term in October elections and accused the president’s backers of “seeking to protect their personal interests and retain their privileges.”

In a Jan. 1 Douala cathedral homily, he said society was being “paralyzed and destroyed by corruption at all levels,” which had “plunged the country into moral and spiritual crisis.”

In an April 17 television interview, he warned mass unemployment was depriving young people of prospects and said the government should negotiate with secessionist and rebel groups and permit the election of regional presidents.

“Decentralization allows peace, since people in a given region can then think about their future,” the archbishop said.

“Peace through armed force is never a true peace. Since we are all in the same country and all brothers, our message is to stop the violence immediately at all costs, without vengeance, and accept others who don’t think like us.”

The Cameroonian bishops’ conference is engaged in legal action over the alleged murder of Bishop Jean-Marie Bala of Bafia, whose body was found floating in a river in June 2017 in what justice officials ruled was a suicide.

Meanwhile, in an April 23 commentary, the conference’s news agency, L’Effort Camerounais, urged the international community to “open its eyes” to “human rights abuses and extrajudicial executions” by government forces in the country’s Anglophone regions.

It added that young men had been rounded up, shot and “dumped in public squares as a deterrence to others,” and accused the army’s spokesman, Col. Didier Badjeck, of ignoring “evidence of military atrocities that lies scattered far and wide like autumn leaves.”

“Despite the frequency and magnitude of such atrocities, the government remains in denial, indicating it intends to pursue its dehumanizing acts,” the church agency said.

“There may be growing calls for dialogue, but the government seems to have a draconian solution to the ongoing crisis: Hit them with such brutal force that those lucky to survive will never dare raise their heads again!”

NEXT: Cardinal urges Canadian pro-lifers at march to ‘speak more loudly by silence’