Holy Spirit offers gifts that should be cherished, pope says 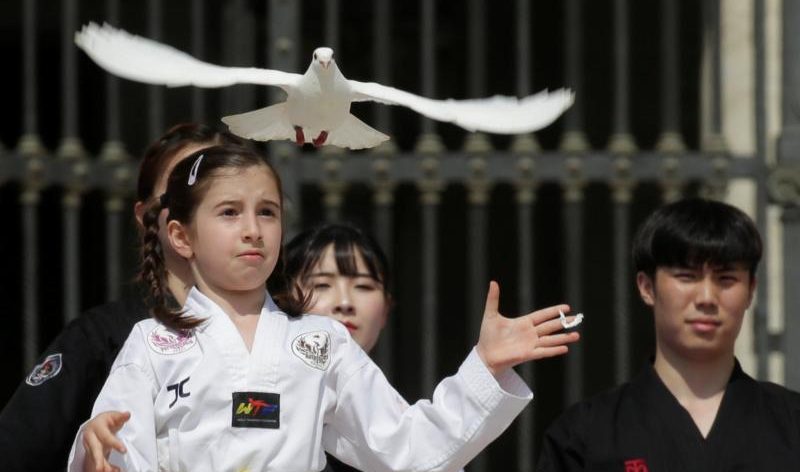 A Taekwondo athlete from Korea releases a dove after performing for Pope Francis during his general audience in St. Peter’s Square at the Vatican May 30. (CNS/Max Rossi, Reuters)

VATICAN CITY (CNS) — Pope Francis asked Catholics to recognize and be thankful for the undeserved gift of the Holy Spirit they received with the sacrament of confirmation.

“It is a gift to be cherished with care” and to follow with docility, “letting oneself be molded like wax from the burning love” of the Holy Spirit, the pope said May 30 at his weekly general audience in St. Peter’s Square.

During the audience, the pope was treated to a performance by taekwondo athletes from South Korea. The initiative was supposed to include athletes from North Korea, but the North decided not to participate, South Korean media reported May 25. The North Korean taekwondo federation reportedly cited the military exercises between South Korea and the United States May 25 as the main reason for withdrawing from the scheduled event.

Even though the North Korean athletes “did not arrive,” the performance for the pope “was still a message of peace,” Greg Burke, the Vatican spokesman told reporters May 30.

As a woman sang, “Ave Maria,” the young athletes — with one side wearing a white “dobok” or uniform, and the other side wearing black — further symbolized the division of their peninsula by standing on opposite sides of a large colored mat and creating a line down the middle with white scarves.

The two sides embraced and held hands after their display and released a white dove. They then came together to hold boards up high, flip in the air to smash them with their feet and send red flower petals flying. Before greeting the pope they unfurled two banners: one saying, “One World, One Taekwondo,” and the other saying in Italian, “Peace is more precious than triumph.”

The pope thanked the athletes for sending the world an important message. “It is a message of peace for all of humanity,” he said.

In his catechesis, the pope continued a new series of talks on the sacrament of confirmation in which, he said, Catholics are called to renew the promises made on their behalf by their parents and godparents at baptism, personally profess the faith and receive the Holy Spirit to be their helper and guide.

The bishop or priest lays hands upon the candidates and asks God to give them a wealth of gifts: “wisdom, knowledge, right judgment, courage, understanding, reverence and holy wonder,” the pope said.

The Spirit gave Jesus the same gifts so he could fulfill his mission, the pope said, and so the newly confirmed also are offered these gifts so they may better reflect Christ.

The fruits of the Spirit, according to St. Paul, are “love, joy, peace, patience, kindness, generosity, faithfulness, gentleness and self-control,” the pope said. There is one Spirit who distributes multiple gifts to enrich the one church, creating diversity and unity at the same time, he said.

The use of chrism oil when the bishop or priest makes the sign of the cross on the candidate’s forehead is a further expression of the action of the Holy Spirit, who “consecrates and permeates the baptized,” the pope said.

Being sealed with the gift of the Holy Spirit, the newly confirmed is “configured more closely” to Christ and given the strength to bear witness to him in the world, he added.