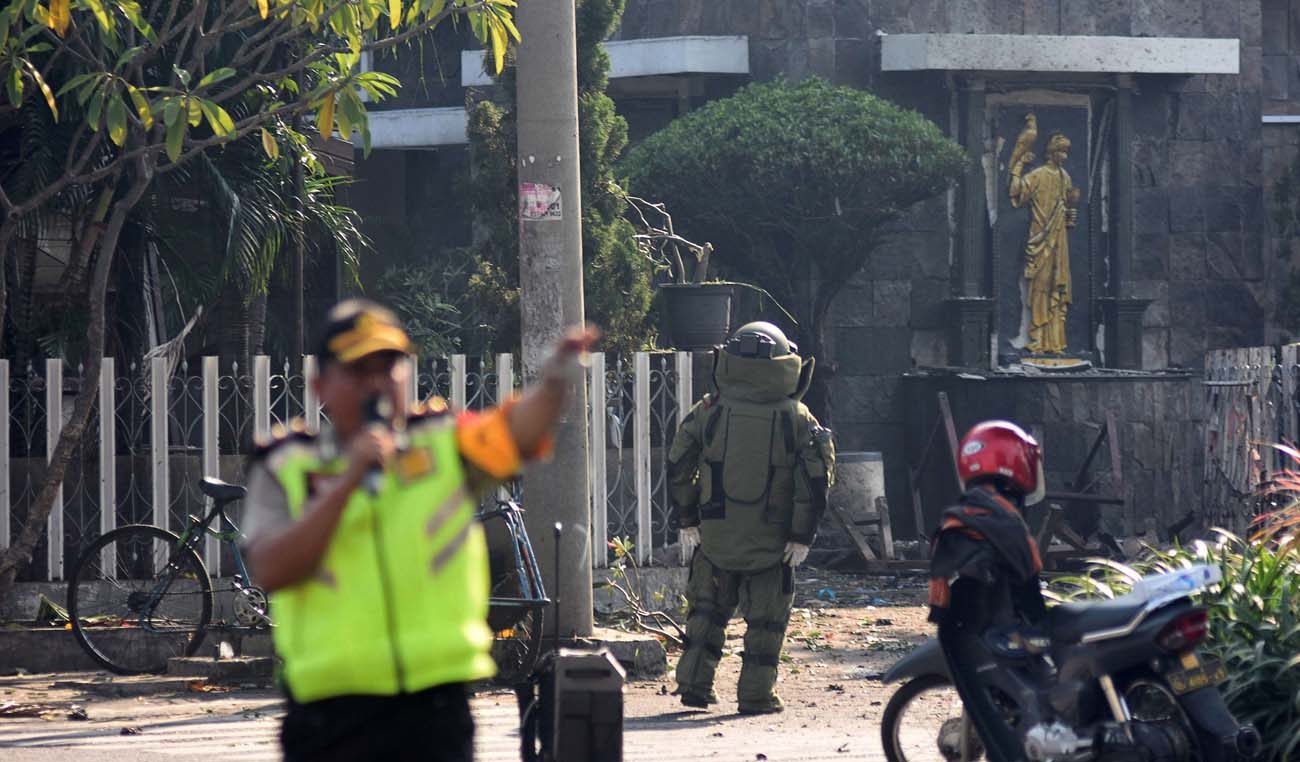 A member of the police bomb squad unit examines the site of a May 12 explosion outside Santa Maria Catholic Church in Surabaya, Indonesia. Christian leaders have called for unity following a spate of suicide bombings that targeted three churches, an apartment building and the police headquarters, the deadliest attacks in more than a decade. (CNS photo/ M Risyal Hiday, Antara Foto via Reuters)

JAKARTA, Indonesia (CNS) — Christian leaders called for unity following a spate of suicide bombings that targeted three churches, an apartment building and the police headquarters in Indonesia’s second city, the deadliest attacks in more than a decade.

Ucanews.com reported that early May 14, a family of five, including three children, carried out a suicide bombing on two motorcycles at police headquarters in East Java’s provincial capital, Surabaya, police said. At least one fatality was confirmed, but initial reports said at least seven people were dead, including four of the attackers, and that 10 people were injured, including four policemen.

An 8-year-old girl, who was reportedly with the family, survived the blast and was being treated in a hospital, said an East Java police spokesman.

The attack followed a series of bombings a day earlier in the city that killed at least 17 people, reported ucanews.com. Three suicide blasts were committed by one family — a husband, wife and four children — against three churches in the town.

The first bombing was carried out by the couple’s sons, 18 and 16, in the parking lot of the Santa Maria Catholic Church; the second was by the wife, and their two daughters, 12 and 9, at the Diponegoro Indonesian Christian Church. The third was detonated outside the Surabaya Central Pentecost Church.

One of the casualties at Santa Maria Church was Aloysius Bayu Rendra Wardhana, who was killed trying to prevent the suicide bombers from entering the church compound.

“If he had not stopped the bombers, there would have been more victims (inside the church),” he said.

The victim’s mother said the family was “proud to have a martyr who gave his life to save hundreds of people attending Sunday Mass inside the church building.”

On that same day, police said they later detonated four bombs found in the house of the family who carried out the bombings.

At the Vatican May 13, Pope Francis said he was praying for all those affected by the “serious attack against places of worship” and for the violence to stop. He asked that “everyone find room in their heart for feelings — not of hatred and violence — but of reconciliation and fraternity.”

Gen. Tito Karnavian, national police chief, named two groups inspired by Islamic State that were likely responsible for the attacks. The leaders of both groups are currently in prison.

“Because their leaders are detained, their groups could be retaliating,” said Karnavian. He also said the attacks could also be in retaliation to the arrest of two suspected terrorists and the deaths of four others May 4 in Bogor.

Father Agustinus Ulahayanan, executive secretary of the Indonesian bishops’ Commission for Ecumenical and Interreligious Affairs, denounced the bombings and called on Catholics and other Christians to unite and be vigilant.

“We must not be afraid. We must tighten security,” he said.

PREVIOUS: After dam bursts, bishops urge Kenya to step up response to tragedies

NEXT: Pope’s Lamborghini fetches nearly $1 million for charity at auction