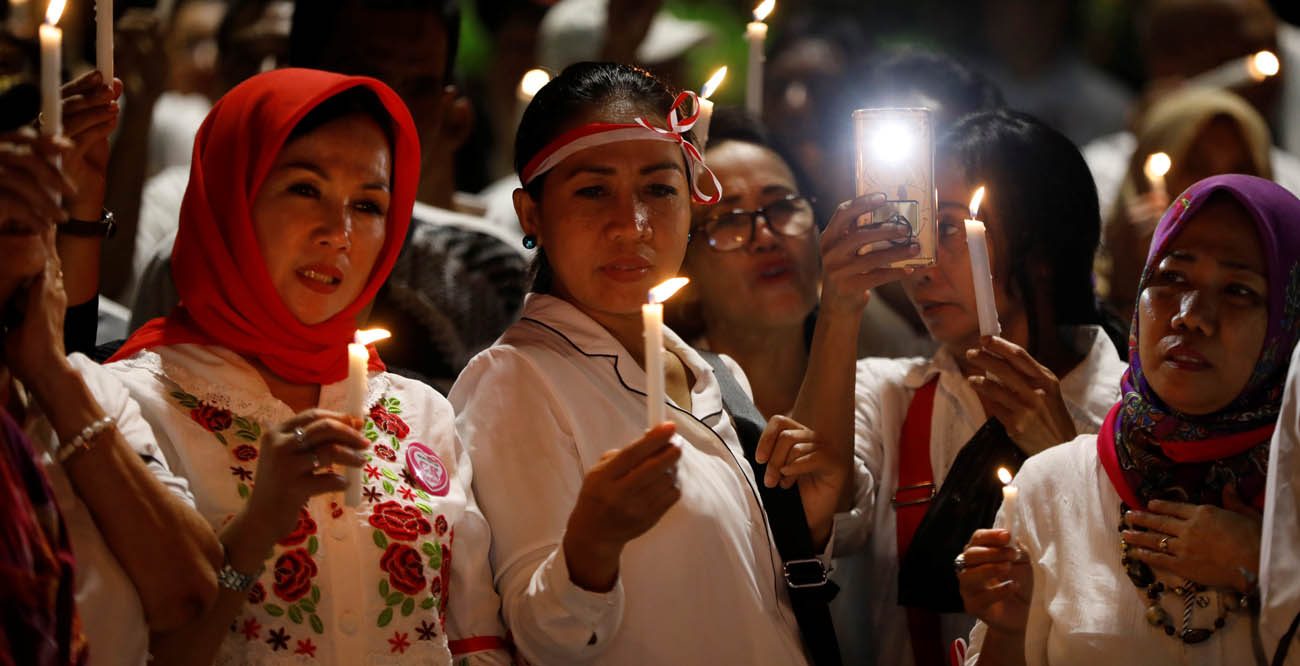 People attend a candlelight vigil May 15 in support of the victims and victims' families of the recent attacks at police stations and churches in Jakarta, Indonesia. Dozens of religious leaders, backed by former first lady Sinta Nuriyah Wahid, have launched a new anti-terrorism group. (CNS photo/Darren Whiteside, Reuters)

Ucanews.com reported that the People’s Movement for Counter-Terrorism has committed itself to fighting against terror attacks that have “destroyed the values of humanity, spread fear and ruined national unity,” said Sinta, wife of former president Abdurrahman Wahid.

Speaking with ucanews.com, Jesuit Father Johannes Hariyanto, general secretary of the Indonesian Conference on Religion and Peace and a member of the new group, said any terrorist act cannot be justified.

“We cannot impose something on others by threatening and forcing them to follow what we believe. This is completely wrong,” he said.

During the launch of the group on May 15 in Jakarta, Sinta said: “A series of terror attacks is beyond the limits of humanity. At least 31 people consisting of children, civilians and policemen were killed (in Surabaya). Worse, the perpetrators sacrificed children in the terror attacks.”

The group’s launch was followed by a prayer for the bombing victims. It also issued a statement calling for national unity by strengthening bonds between people of different religious, ethnic and racial backgrounds.

On May 16, four men carrying sharp weapons attacked the police headquarters in Sumatra’s Riau province. One policeman was killed and two others injured before the perpetrators were shot dead.

On the evening of May 15, about 100 people held a candlelight vigil at the National Monument in Jakarta.

“We aimed to show our solidarity with bomb victims and their families and to express our moral support for the police in their efforts to counter terrorism,” Budi Arie Setiadi, a Muslim and youth group leader who organized the event, told ucanews.com.

In a prayer, a Muslim cleric, Taufik Damas, asked God “to protect our young generation from everything that can destroy their way of thinking” and “to protect our children and families from doctrines that can ruin our humanity.”

Joannes Joko, a participant from St. Andrew Parish in Sukaraja, said the shocking nature of the bombings encouraged him to attend the prayer gathering.

“This is an effort to pressure the public into building solidarity. There must be immediate action from the government to cut the root causes of terrorism, one of which is intolerance,” he said.