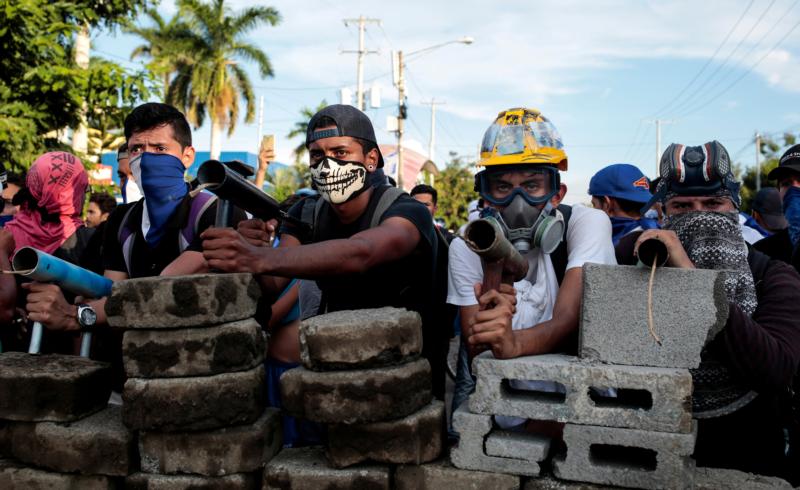 Demonstrators in Managua, Nicaragua, stand behind a barricade during clashes with police May 30. Nicaragua’s bishops issued an urgent statement May 31 calling for an end to police and paramilitary attacks on unarmed protestors. (CNS photo/Oswaldo Rivas, Reuters)

MEXICO CITY (CNS) — Nicaragua’s bishops have demanded an end to police and paramilitary attacks on unarmed protesters, who have continued to call for the Central American country’s authoritarian president to step aside.

The bishops issued an urgent statement May 31, the morning after an especially brutal crackdown on protesters, which claimed at least 13 lives, according to media reports.

“The bishops of Nicaragua have experienced with deep pain, the violent events perpetrated last night by armed groups related to the government against the civil population. We energetically condemn all these violent acts,” the Nicaraguan bishops’ conference said in the statement.

“(We) condemn all of these acts of repression on the part of groups close to the government and we want to leave it clear the national dialogue talks cannot continue while the Nicaraguan people continue being denied their right to protest,” the prelates said.

At least 5,000 protesters — including women and children — sought refuge on the campus of the Jesuit-run University of Central America May 30, according to the rector, Jesuit Father Jose Alberto Idiaquez.

“A countless number of injured were attended to by volunteers,” the university said in a statement released late May 30. Acknowledging that it “puts itself on the side of the people in their just struggle,” the university denounced “this new criminal attack and demands the authorities immediately cease the repression, which uses shock forces to kill with impunity.”

Nicaragua’s bishops have attempted to broker a peaceful solution to the unrest in the country and convened a national dialogue earlier in May. That dialogue subsequently broke down and the bishops withdrew from their role as mediators, citing “a lack of consensus among the parties.”

Auxiliary Bishop Silvio Baez of Managua, who has received death threats for his support of the rights of people to protest, tweeted May 31 that the bishops’ latest statement “does not speak generically of ‘violent acts’ rather acts carried out by ‘groups related to the government at against the civil population,’ ‘killing’ the people.”

Nicaragua descended into turmoil in mid-April after the government of Sandinista President Daniel Ortega attempted to overhaul the country’s social security system and increase fees. The overhaul came amid accusations of corruption and mismanagement in the system.

Protests, especially among students, have flared frequently and the government has carried out a violent crackdown on dissent and threatened independent media. People in the streets have called for Ortega to step aside and for new elections to be held, but the president has refused and ramped up the repression against them.

A recent report issued by Amnesty International described the government strategy for containing protests as “shoot to kill.” It counted at least 76 dead and 860 injured since protests erupted.

The Central American University has come under attack during the government actions.

On May 27, masked men arrived shortly after midnight and fired a mortar at campus security personnel. No injuries were reported, but the university said in a statement the attack was government-sponsored.