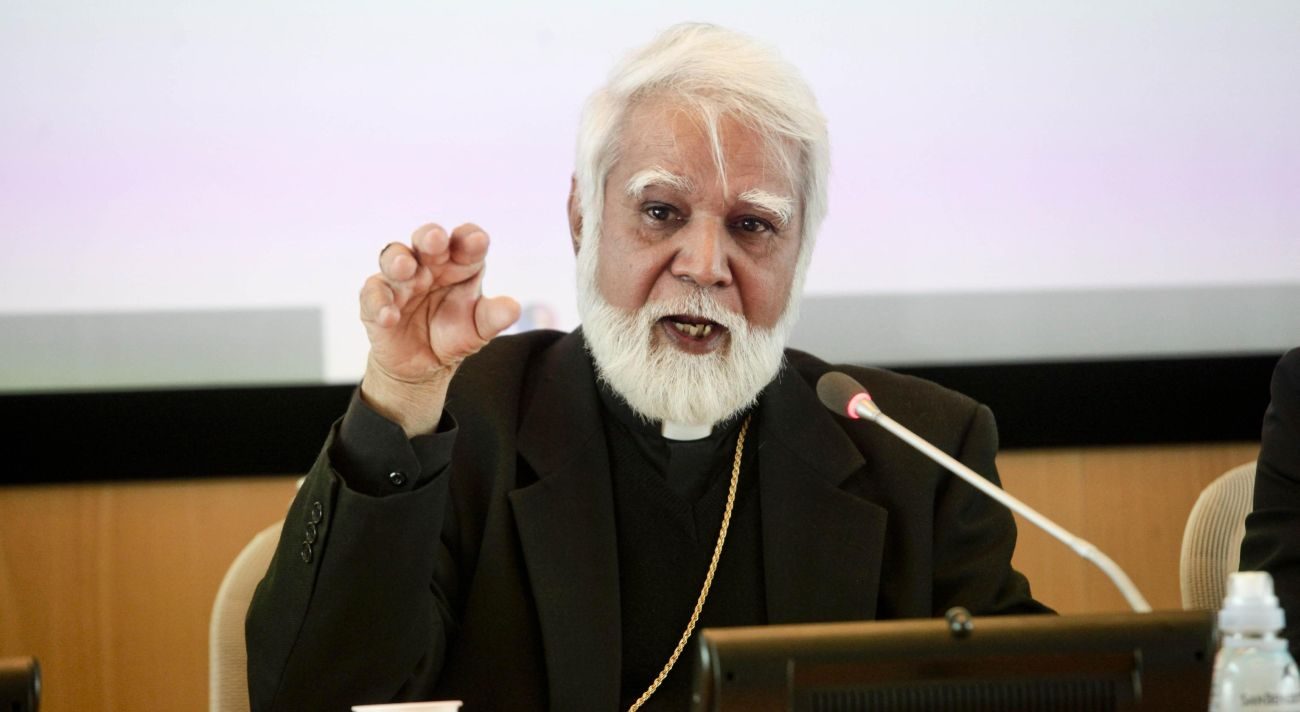 Archbishop Joseph Coutts of Karachi, Pakistan, was one of 14 new cardinals named by Pope Francis May 20. He is pictured speaking during a meeting in Milan, Italy, March 2, 2016. (CNS photo/Mourad Balti Touati, EPA)

KARACHI, Pakistan (CNS) — Cardinal-designate Joseph Coutts sees himself as a conductor — not of musicians but of religious leaders from various faiths.

He will soon be leading his religious orchestra as a cardinal after being named by Pope Francis May 20 as one of 14 men to be promoted, reported ucanews.com.

“Christians who live here should promote a culture of harmony,” said the 72-year-old archbishop of Karachi, Pakistan’s most populous city.

“We all are musical notes. Each note has a specific identity, but when played together, they spread a message of peace, joy, love and harmony,” he said.

The cardinal-designate has made interreligious dialogue a priority since 2012, when he was named to head the Archdiocese of Karachi.

He recently formed the first archdiocesan commission to promote interfaith harmony, and he often attends programs, seminars and conferences to encourage people from different religions to live together peacefully. He said the beauty of Karachi is the ease with which it accommodates people of various religions and from different provinces, tribes and castes.

Over the past four years, Muslim leaders have made regular visits to St. Patrick’s Cathedral to meet with the archbishop on religious holidays like Christmas and Easter.

“In this diocese, the church has for over six decades brought good news in the fields of education and medicine, and in the case of natural disasters reached out to those who have been affected, injured or become sick,” he said.

“It’s time to promote harmony. That is our new motto. We have to learn it and teach it. Now we are tasked with restoring harmony to this seaport city by welcoming people from different customs and traditions.

In December, Archbishop Coutts joined a rally to celebrate the birthday of the Prophet Muhammad organized by the Interfaith Commission for Peace and Harmony. Attendees included Sikh and Hindu leaders.

One month earlier, the Baha’i community was overjoyed to see the archbishop lead an event feting what would have been the 200th birthday of Hazrat Baha’u’llah, the founder of the Baha’i faith.

“The community was not expecting this,” said Farhad Mashriqui, a representative of the Baha’i community.

Archbishop Coutts said the recent spate of attacks in Pakistan has been a big problem for the minority as well as the majority.

“This is a problem that is affecting the whole country. This extremist, very fanatic form of Islam, which is not the Islam of the general population, is affecting not only Christians and other non-Muslims, but the terrorists are not sparing even Muslims. They are targeting shrines and mosques. They have a different kind of ideology altogether, and they are causing a lot of harm to the country. Christians are also suffering,” he said.

Father Inayat Bernard, rector of the Sacred Heart Cathedral, said the Pakistan church had been waiting for a red hat since 1994, when Pakistani Cardinal Joseph Cordeiro died.

“This is like a breath of fresh air for us. We have beautiful feelings. The naming of a cardinal from an Islamic country is a matter of great pride. Finally, Pakistan has a prince of the church,” he said during an interfaith gathering at Dominican Peace Center in Lahore.

Father Pascal Paulus, president of the Major Religious Superiors Leadership Conference of Pakistan, called the cardinal-designate “a symbol of Christ in Pakistan. He is a visionary person with knowledge and a good understanding of political matters.”

“Now the issues of human rights will carry more weight, and we shall have a stronger voice. The great pastor will boost our morale and will be the reason for progress of the local church.”

St. John Paul II named him coadjutor bishop of Hyderabad in 1988, and he became head of the diocese two years later. He served as bishop of Faisalabad from 1998 to 2012, when Pope Benedict XVI named him archbishop of Karachi.

NEXT: Jesuit radio is at forefront of human rights battle in Honduras