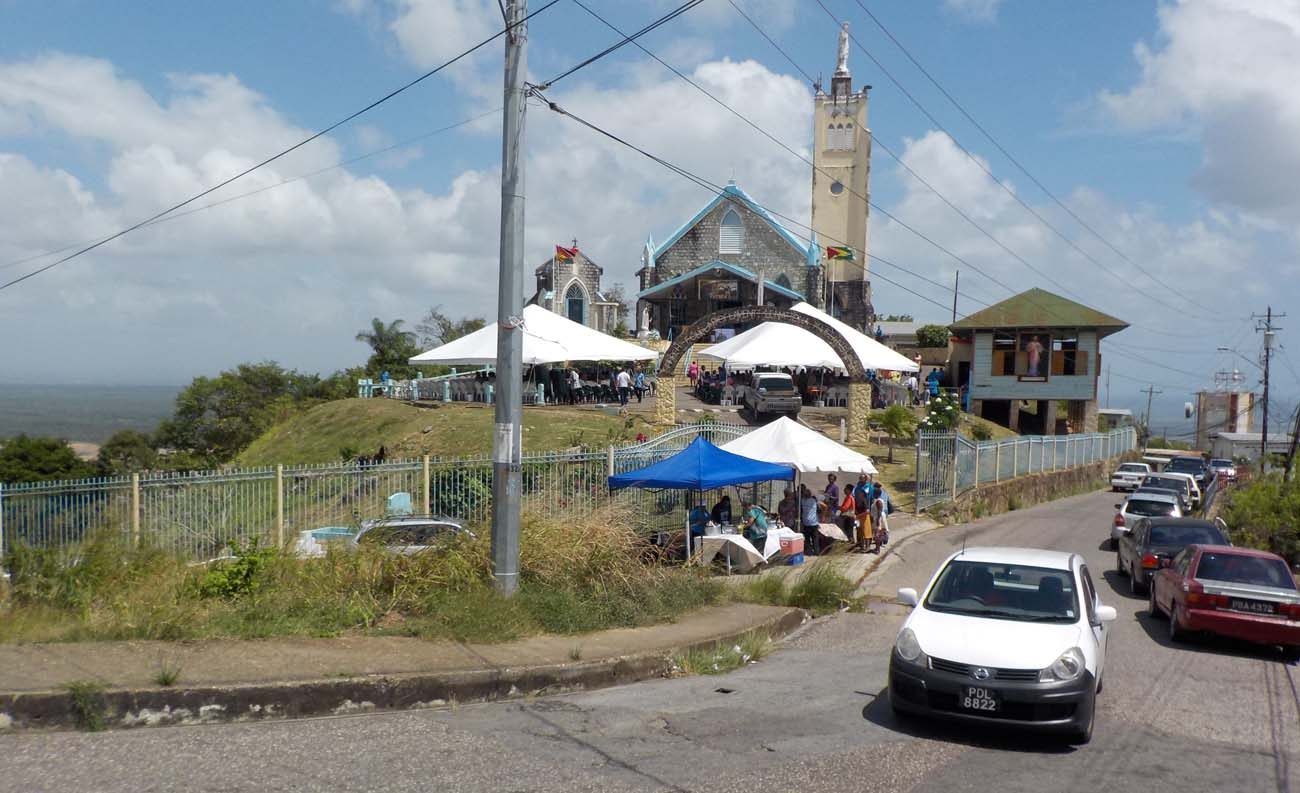 Vendors are seen outside Our Lady of Laventille Shrine May 13 in Trinidad and Tobago's, Port of Spain. The shrine is the monthly destination for hundreds of pilgrims for devotions held from May to October every year. (CNS photo/Laura Ann Phillips)

PORT-OF-SPAIN, Trinidad (CNS) — From May to October, hundreds of pilgrims brave heavy rains, high winds or scorching heat to attend Marian devotions at Trinidad and Tobago’s national shrine of Our Lady of Laventille.

That they also brave some of Trinidad’s most dangerous neighborhoods to get there seems to disturb few regulars.

“Mary said she would take care of us,” said Judy, a soft-spoken pilgrim from El Socorro, a small farming community five miles east of Port of Spain. She had arrived at the May 13 observances more than an hour before the program’s start and was already nibbling a fried sandwich from the food vendors at the gate.

“I’ve experienced a lot of miracles,” she added, including one where she had been unemployed, prayed about it at the shrine and got a job that same week.

More than 500 people converged on the hilltop parish from the surrounding districts of Never Dirty, Success Village, Trou Macaque. Pilgrims also came from as far as Mayaro, 60 miles to the southeast, on the other side of the island. Strong winds rattled the two metal-framed, canvas-topped tents covering most of the front yard, cooling the threat of a scorching afternoon.

A marked police presence was visible outside the shrine’s compound. The day before, a man was murdered less than a mile away from the shrine, and the number of people murdered in Trinidad and Tobago since the beginning of the year now exceeds 200.

In his homily, Archbishop Jason Gordon of Port of Spain urged the pilgrims to recall Mary’s central message to the shepherd children in 1917 and recognize that “we have the power to change this country by prayer, fasting and penance.”

“Action must mirror belief,” he said. “We are called to be spectacularly holy. This generation will not be converted by words, but by the way we live our lives.

“It is by our holiness that we will get people to put down their guns, that God will change our land. We face a difficult time in our country, but each challenge can be met if we give our hearts to Jesus.”

Laventille devotions — the rosary, renewal of personal and national consecration to Mary, Benediction and Mass — are held monthly from May to October on the Sunday of, or closest to, the 13th of the month, in imitation of Mary’s 1917 apparitions in Fatima, Portugal.

The shrine is visible from most points of the city, resembling a tiny Lego assembly perched atop a distant peak. It is actually a stone church with a 52-foot belfry, at the top of which stands a 30-foot stone statue of Our Lady of Fatima, a gift from France. The 1886 construction of this chapel enabled Marian devotions from that time.

Laventille has historical pedigree: at one time it was a military area for the Spanish and British; newly emancipated slaves came to live here after 1838. The steelpan was invented here, the only musical instrument invented in the 20th century and, despite perennial poverty, the area has also produced a plethora of locally and internationally recognized musicians, educators, artists and other professionals.

Over the past decades, however, it has also become known for rampant crime and gang violence. Residents stay indoors at night, public transportation systems will not go to some areas and, in some particularly troubled spots, joint police and army patrols have been called in to keep the peace.

But, Phyllis Clarke, a retiree of St. Dominic’s Parish in Morvant, a neighborhood 10 minutes east of the shrine, is not thwarted by the thought of crime.

“I just moved back to Morvant,” she said, “and they stole my car on Holy Thursday night, but that didn’t stop me. I went to the whole Triduum.”

She said police located her car quickly, so it was unthinkable to miss the devotions.

“I’ve been coming here since I was a child,” said Clarke. She remembers Girl Guides and Catholic school students in uniform and crisp, orderly lines trekking uphill past roadside homes and small shops, with intermittent glimpses of wetlands and the Gulf of Paria on the capital’s southeastern skirts.

Up to 20 years ago, clusters of trudging adult pilgrims were still a common sight, praying the rosary, sticking to the sides of the narrow, paved roads, particularly the sharp, blind bends beyond which drivers could not see.

Today, however, there are no clusters of pilgrims on foot.

Attendance at the shrine “used to be larger,” noted a resident who asked not to be named. He has lived near the shrine since the 1960s, through several changes and five archbishops of Port of Spain.

“The crowd used to reach all here,” he said, indicating an area spilling out of the church’s compound, along the streets and into surrounding yards.

“But, things changed so drastically,” he said, sadly. “It didn’t have so much shooting.”

Still, he is convinced that pilgrims need not fear.

“They hold their own corners,” he said of the gangs in the vicinity, explaining that turf wars apply only to rival gangs. “They fightin’ their own wars; they don’t interfere with strangers.”