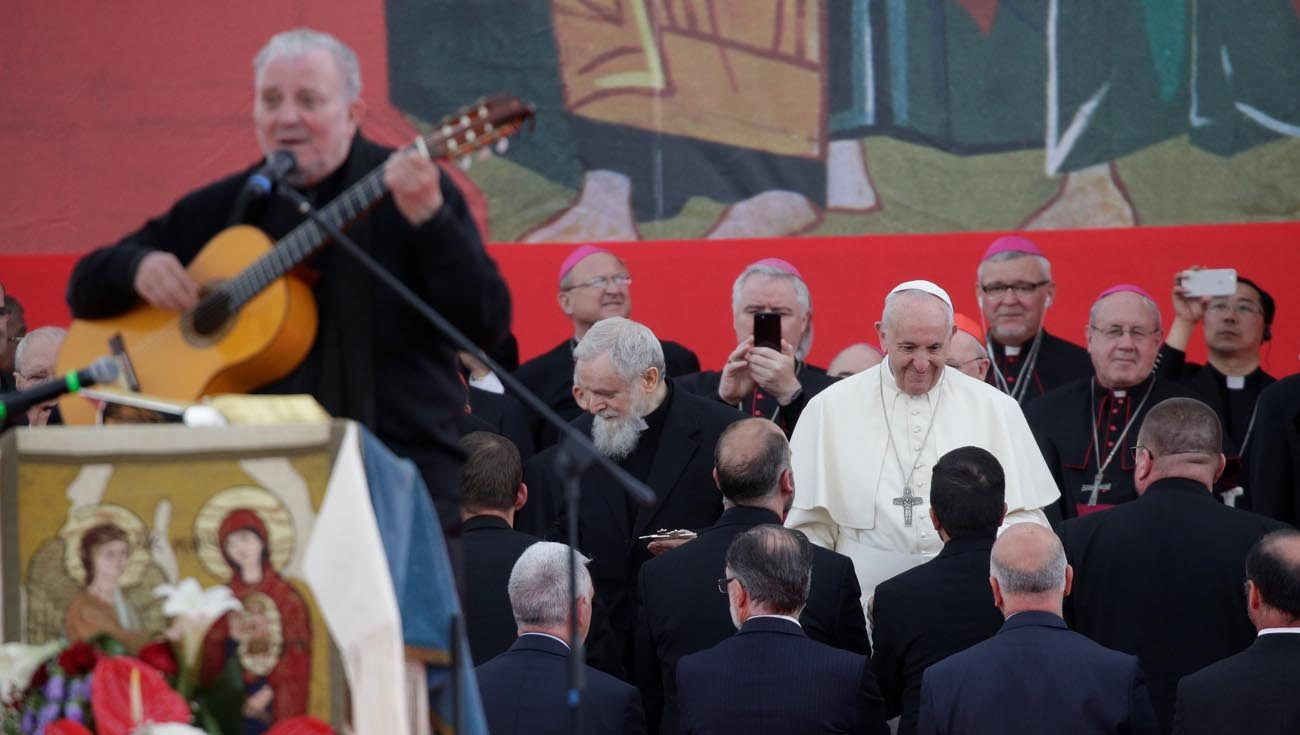 Pope Francis greets people during a gathering of the Neocatechumenal Way at Tor Vergata, a field on the edge of Rome, May 5. Some 100,000 members of the movement welcomed the pope as they celebrated the 50th anniversary of the movement. Also pictured is Kiko Arguello, co-founder of the Neocatechumenal Way, playing guitar. (CNS photo/Max Rossi, Reuters)

ROME (CNS) — Sharing the Gospel means being a witness to love, responding to questions and patiently walking alongside people, not dictating how and when they take the next step, Pope Francis told members of the Neocatechumenal Way.

Some 100,000 members from more than 130 countries gathered in a field on the edge of Rome May 5 to welcome Pope Francis and celebrate the 50th anniversary of the movement, which guides Catholics in an itinerary of exploring the meaning of their baptism and learning to live according to its promises.

Kiko Arguello, one of the Spanish co-founders of the movement, introduced the members to the pope — calling out one by one the nations represented and introducing the bishops and cardinals who accompanied many of the groups.

Before sending 34 teams of Neocatechumenal Way members off on new missions, including to poorer parishes on the “peripheries” of Rome, Pope Francis reminded all the members about the obligation of every Christian to evangelize, and he gave notes on how it should be done.

First, he said, a Christian must never forget that God always loves his children and always keeps his promises.

“Whatever we do, God continues to love us faithfully,” the pope said. “And when the dark clouds of problems seem to gather around you, remember that the faithful love of God shines always like a sun that never sets.”

To evangelize is to share with others that faithful love of God, he said. “It is to proclaim that the Lord loves us and will never tire of me, of you, of us and of our world even if we sometimes tire of it.”

Jesus told his disciples to “go out,” the pope said. “The temptation is strong to stay, to not take risks and to be content with having the situation under control. It’s easier to stay home, surrounded by those who love us, but that is not Jesus’ way.”

The Lord calls Christians to be “pilgrims in the world in search of the brother or sister who still does not know the joy of God’s love,” he said.

Being a pilgrim requires traveling light and renouncing comfort, wealth and power, the pope said. “Only a church that renounces the world can proclaim the Lord well. Only a church detached from power and money, free of triumphalism and clericalism can witness in a credible way that Christ frees a person.”

The Lord also sent his disciples forth together, the pope noted. “One who is fully missionary does not go alone but goes together.”

And, he said, “walking together is an art, which must be learned always. One must be attentive, for example, not to dictate the gait of others. But rather, one must accompany and wait, remembering that the journey of the other is not identical to mine.”

In the Neocatechumenal Way’s outreach to others, the pope said, members must be sensitive to the individual needs of the people they are inviting.

“What counts are not arguments that can convince, but a life that can attract,” Pope Francis told them. It is not “the ability to impose, but the courage to serve.”

And, he told them, be humble. “Don’t put in first place the negative aspects and things that need to change, but look with your hearts, with a gaze that appreciates, an approach that respects and a trust that is patient.”