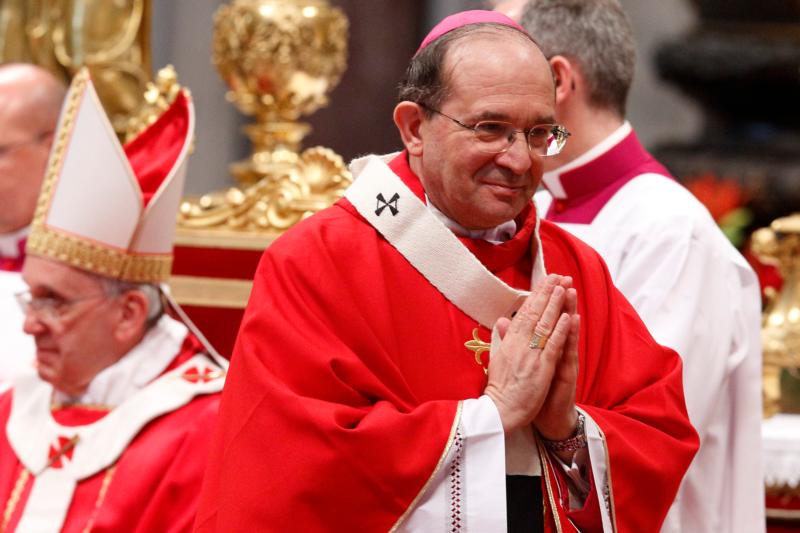 Archbishop Giuseppe Petrocchi of L’Aquila, Italy, was one of 14 new cardinals named by Pope Francis May 20. Cardinal-designate Petrocchi believes the pope named him a cardinal as a gesture of solidarity and charity to a diocese devastated by a 2009 earthquake. He is pictured after greeting the pope during Mass on the feast of Sts. Peter and Paul in St. Peter’s Basilica at the Vatican June 29, 2013. (CNS photo/Paul Haring)

VATICAN CITY (CNS) — For Cardinal-designate Giuseppe Petrocchi of L’Aquila, Italy, Pope Francis’ decision to name him a cardinal is a gesture of “concrete charity,” a “charity that builds where there was destruction.”

Nine years after an earthquake killed 309 people in L’Aquila and left the town center in ruins, destruction and building is something he and the Catholics of the area know well.

In December, the archdiocese finally celebrated the complete reopening of the medieval Basilica of Santa Maria di Collemaggio on the edge of town. Cardinal-designate Petrocchi, 69, used the occasion to give thanks, but also to launch “a heartfelt appeal to begin work as soon as possible on the cathedral.”

The closed, partially collapsed cathedral is in the center of the city, which, despite nine years of work on various buildings, is still largely uninhabited.

Speaking to an online news site May 23, the cardinal-designate said his nomination is meant as a “call to hope when it is tempting to give up and let depression get the upper hand.”

“I think that with my nomination,” he said, “Pope Francis wanted to give the message that he is here with us, that he is with us as we take the various steps toward the Resurrection, which is not only the reconstruction of what was, but openness to something new that comes from God.”

The earthquake, remembering the victims and rebuilding the city are never far from the minds of the cardinal-designate and his people.

In fact, his installation as the archbishop of L’Aquila in July 2013 took place at the end of a pilgrimage, which he began at the former site of a residence for university students. He knelt in prayer before the ruins where eight young adults died when the building collapsed. He moved on to the ruins of the cathedral and of another small church before celebrating Mass in the Basilica of Santa Maria.

Living in and around a city that is a building site is a challenge, but Cardinal-designate Petrocchi used his 2016 Christmas homily to remind residents of the importance of dedicating a bit of time each day to prayer and to one’s family.

And while many people still set aside 30 minutes a day to watch the evening news, the cardinal-designate said he worried that most people don’t dedicate that much time to listening to members of their family. He suggested sitting down at least once a week for a “family news” review, a sharing session done without distraction from the television, tablet, computer or telephone.

Cardinal-designate Petrocchi arrived in L’Aquila after serving for 15 years as the bishop of Latina, a diocese created in 1986 with the merger of three dioceses and part of a fourth. Much of his ministry was devoted to building a sense of unity across the entire territory, and he issued a series of pastoral letters on the theme and provided “Notes for a Catechesis of Communion.”

His initiatives culminated with the celebration of the diocesan synod in 2011-2012.

The new cardinal was born in Ascoli Piceno Aug. 19, 1948. He entered the Ascoli Piceno seminary at the age of 17 and completed his high school studies there. The local bishop then sent him to the Rome’s major seminary, and he earned his degrees in philosophy and theology from the Pontifical Lateran University.

He also taught at the diocese’s theological school for laity, worked in its family counseling service, was involved in the Focolare Movement and taught religion, philosophy and psychology in state-run high schools. From 1991 to 1998, he was editor of the diocesan news bulletin.

St. John Paul II named him bishop of Latina-Terracina-Sezze-Priverno in 1998.