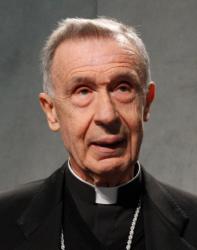 Archbishop Luis Ladaria was one of 14 new cardinals named by Pope Francis May 20. (CNS photo/Paul Haring)

VATICAN CITY (CNS) — That only men can be validly ordained to the priesthood is a truth that is part of the Catholic faith and will not and cannot change, said Cardinal-designate Luis Ladaria, prefect of the Congregation for the Doctrine of the Faith.

“It gives rise to serious concern to see that in some countries there still are voices that put in doubt the definitive nature of this doctrine,” the cardinal-designate wrote May 29 in the Vatican newspaper, L’Osservatore Romano.

St. John Paul II, confirming the constant teaching and practice of the church, formally declared in 1994 that “the church has no authority whatsoever to confer priestly ordination on women and that this judgment is to be definitively held by all the church’s faithful.”

Cardinal-designate Ladaria said some people continue to question the infallibility of St. John Paul’s declaration in the document “Ordinatio Sacerdotalis” because “it was not defined ‘ex cathedra'” or formally, solemnly proclaimed as infallible. The argument, the cardinal-designate wrote, is that “a later decision by a future pope or council could overturn it.”

But “sowing these doubts creates serious confusion among the faithful not only about the sacrament of orders as part of the divine constitution of the church, but also about how the ordinary magisterium can teach Catholic doctrine in an infallible way,” he wrote.

A teaching of the church is infallible not only when it is solemnly pronounced by a council or by a pope speaking “ex cathedra,” he said. A teaching is recognized as infallible also when it is “the ordinary and universal teaching of bishops spread throughout the world when, in communion among themselves and with the pope, they propose Catholic doctrine that is to be held definitively.”

That is what St. John Paul did, he said. “He did not declare new dogma, but with the authority conferred on him as successor of Peter, he formally confirmed and made explicit — to remove any doubt — that which the ordinary and universal magisterium had considered as belonging to the deposit of faith throughout the history of the church.”

“Christ willed to confer this sacrament on the 12 apostles — all men — who, in turn, communicated it to other men,” Cardinal-designate Ladaria wrote. “The church always has seen itself as bound to this decision of the Lord, which excludes that the ministerial priesthood can be conferred validly on women.”

In response to questions, he said, the doctrinal congregation “has repeated that this is a truth belonging to the deposit of the faith.”

That a candidate for the priesthood must be male, he said, belongs to the “substance of the sacrament” and cannot be changed because the sacrament was instituted by Christ.

Just because women cannot be ordained, he said, does not imply “subordination, but a mutual enrichment.”

The exalted role of Mary in the church, even though she was not one of the 12 apostles, shows the importance of both the feminine and masculine in the church, he said, which is a challenge to modern culture that “struggles to understand the meaning and goodness of the difference between man and woman.”

Cardinal-designate Ladaria noted that Pope Francis also has reaffirmed the teaching on an all-male priesthood.

In “The Joy of the Gospel” in 2013 he wrote, “The reservation of the priesthood to males, as a sign of Christ the spouse who gives himself in the Eucharist, is not a question open to discussion.”

And, responding to a reporter’s question on a trip to Sweden in 2016, he said, “As for the ordination of women in the Catholic Church, the last, clear word was given by St. John Paul II, and this holds.”

NEXT: Cardinal Bo among faith leaders pledging to back Myanmar peace efforts