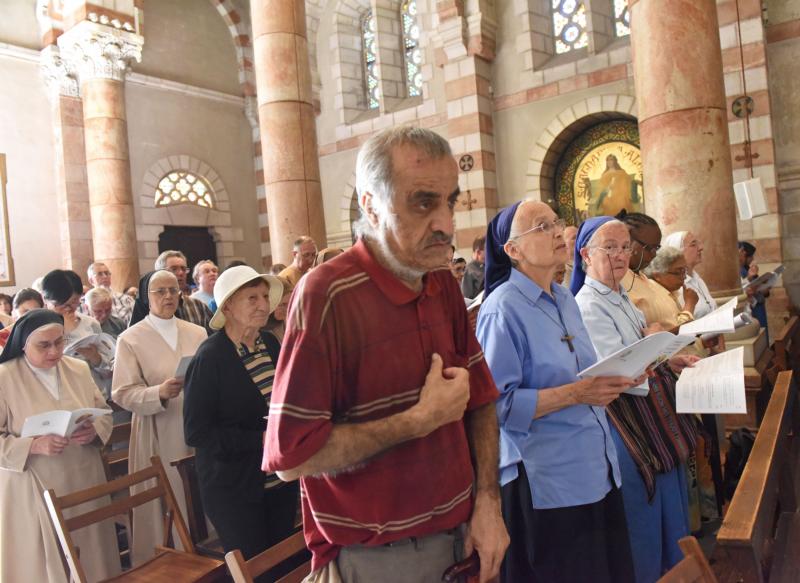 Palestinian Catholic Elias Faiyad, 54, from the Old City of Jerusalem, attends a special prayer service for peace in the Holy Land May 19 at the Church of St. Stephen in Jerusalem. (CNS photo/Debbie Hill)

JERUSALEM (CNS) — Even in times of violence and despair, the power of joint prayer for peace can be felt, said Archbishop Pierbattista Pizzaballa, apostolic administrator of the Latin Patriarchate of Jerusalem.

Local Palestinians, religious and foreign worshippers gathered at the Dominican Church of St. Stephen May 19, answering the archbishop’s call for a joint peace prayer in the face of May 16 violence along the Gaza-Israeli border, in which 62 Palestinians were killed and more than 2,000 were injured.

“We feel helpless for the killing of innocent people and the obstinate refusal to find alternative solutions,” said Archbishop Pizzaballa. “We must go through the strength of prayer to still believe we can change (the situation) and our land will one day be with peace and justice. We want fear and suspicion to give way to knowledge, where differences are opportunities.”

Their faith, he said, will give “courage to defend justice.”

Palestinian demonstrations along the border began March 31, protesting the move of the U.S. embassy to Jerusalem and marking the 70th anniversary of what Palestinians call al-Naqba, or catastrophe — the establishment of the State of Israel. Israel says it has been using live ammunition to prevent Palestinian protesters — whom they say are being incited by Hamas — from breaking through the Gaza border fence, raising fears that they would carry out terrorist attacks on neighboring Jewish villages.

Rosary Sister Virginia Habib, director of the Catechetical Center of the Latin Patriarchate, said during difficult circumstances such as these, she urges the young people “not to forgo hope.”

“We are surrounded by lots of violence in all the Middle East, not just here; we as Christians should not feel frustrated — our Christian faith tells us that the Lord will help us defeat death,” said Habib.

At Pentecost, the faithful are still in the spirit of the Resurrection, she said, and there is hope that evil will not have the final word in their daily life.

“We live our lives, and we continue to come here to pray and keep praying to offer all our mortifications so that peace will take place,” Sister Habib said. “Peace will not happen in our land until peace has taken place in our own heart.”

She said she tells young people that, as Christians, they are called upon to react to the injustices they see following the teachings of Jesus. She said they listen to her because she is living the same experiences as they are.

LaSallian Christian Brother Peter Iorlano said Christians must be witnesses to peace, especially those living and working among Jews and Muslims, to speak out about injustices but in a “level-headed” way.

“You don’t want to fuel the fire,” he said. “You have to be aware of your (surroundings) and how we can be seduced into being violent. We need to be really self-critical and conscientious and say: This is not just. In a way everyone is suffering but … people with power are the ones who can make a difference.”

Archbishop Pizzaballa told Catholic News Service the Christian community draws strength from supporting one another and not allowing the conflict to enter in their hearts. The strength of their daily life, taking care of their children and family, is what frees them to have hope and be positive, he said.

“Life is difficult, but we must always pray for peace,” said Faiyad Elias, 55, of Jerusalem.

Christy Bandak, 43, of Bethlehem, said the only hope people have is in their faith.

“Negotiations have failed, human means have failed. … Peace is a gift from God. That is the only way out,” said Bandak. “Christians, if they are really Christians, are peacemakers. When you hear (about) the bombings and the shootings, one can be afraid. It is a reason to pray to strengthen your faith. We can’t fall into the abyss of desperation.”

Souad Handal, 49, of Bethlehem, West Bank, said as Palestinian Christians, they experience the same injustices as Muslim Palestinians, said but though the situation is getting harder, they do not believe in violence.

“Palestinians want our freedom (but) we (Christians) believe in Jesus as a peacemaker,” Handal said. “We ask for the peace of the land. We can ask only God to help us.”

Lutheran Bishop Munib Younan, who also attended the prayer service, said Christians must raise their voices in the call for justice and be ready to offer themselves as bridges of peace.

NEXT: Archbishop: Naming Chaldean as cardinal is gift to struggling church