The life-changing impact of mission trips 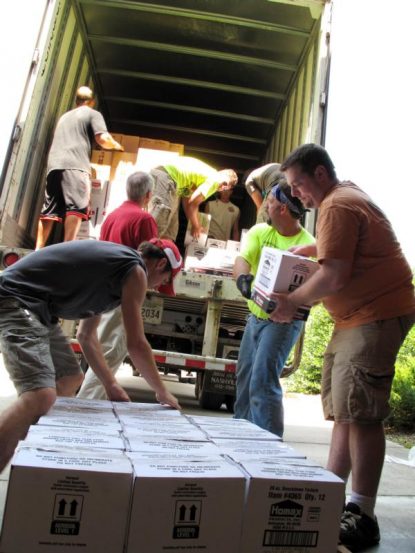 Diocesan youth ministry coordinator Chris Rogers, right, and others from the Diocese of La Crosse, Wis., help with flood relief efforts in Nashville, Tenn., where more than 10,000 homes and business were damaged, and thousands of people displaced in middle Tennessee when torrential rains fell in early May 2010. (CNS photo/Theresa Laurence, Tennessee Register)

Joe Young spent last summer on a mission trip to Magadan, a city in the Russian Far East, where an American priest serves a parish on the site of a former Stalinist labor camp.

“It was the most impactful summer I’ve ever had,” Young said. “It was life-changing.”

Miles away, another Joe, this one a retired attorney, traveled last year to Honduras on a medical mission trip run annually by Creighton University and their campus parish in Omaha, Nebraska.

“This was the first mission trip I ever took,” said Joe Ramirez, who had previously been busy working and raising a family. As a translator for the project, Ramirez was struck by how useful the medical clinic was.

Ramirez’s parents were Mexican immigrants and he grew up in poverty, at one time living in “a little shack of a home” in Omaha with no running water.

“I feel an affinity for the poor and particularly the Hispanic poor because of my personal frame of reference. In Honduras, the kids looked like my grandkids and that really had an impact on me,” he said.

It’s no coincidence that both men use the word “impact” in describing how their experiences affected them. A good mission trip changes us spiritually and intellectually. And a mission trip definitely helps us to have “an affinity for the poor.”

Each year, many Catholic universities, colleges, high school, parishes and dioceses embark on mission trips, or service trips. These brief journeys assist the underserved in places overseas or in Appalachia, on Indian reservations or in impoverished inner cities in the U.S.

Sometimes, they’re called “alternative spring breaks” because that’s when they take place on campus. Or they are “immersion trips” because participants live with the people they serve and become immersed in their culture.

Usually, these trips have a specific project in mind, like assisting with a faith formation program or painting a school or church. But the actual work accomplished takes a back seat to the emphasis on building community. It’s not “us” helping “them” but a mutual exchange that leads to solidarity.

Jesuits talk about “a faith that does justice,” and that’s the faith that enlivens us on a service trip: a faith that is alive to questions about discrimination, white and male privilege, poverty, barriers between people.

Jesuit Father Greg Boyle, who works with gang members in Los Angeles, often speaks of kinship, which he describes as “not serving the other, but being one with the other. Jesus was not ‘a man for others,’ he was one with them. There is a world of difference in that.”

Pope Francis exemplifies this aspect of mission trips when he washes feet on Holy Thursday. He bends down before the poor, the imprisoned, men and women, and people of other faiths. He brings an attitude of openness, humility, love and solidarity.

Solidarity challenges us to leave behind any preconceptions we have about the superiority of our own culture or lifestyle. Solidarity brings us to a level playing field with the people we meet, a field where we have much to learn and gain. Although we hope to help, we aren’t there to make people become like us.

In a thoughtful March 6, 2017, essay on The Jesuit Post, an online blog, Jesuit Brother Ken Homan talks about what he calls the “challenges and often pitfalls” of mission or service trips.

In the piece, titled “Service Trips and Selfies,” Brother Homan raises the idea that participants, armed with cameras, can fall into the trap of becoming more tourist than servant or kin. There are terms for this: “poverty tourism” or “voluntourism.”

Nothing wrong with bringing back a few great pictures of the people we met, of course, but a successful mission trip should mainly bring back some unease and a lot of questions.

“Service trips can make us uncomfortable,” Brother Homan writes, “challenging our privilege and helping us question systems of injustice.”

Rather than returning to our affluence with a sense of superiority, we should return with discomfort about our consumerism and materialism. We should question the great income disparity in our world. We should renew our own determination to fight discrimination and injustice. We should have a greater sense of communion with the poor.

Young, who traveled to Magadan, said the best times were when he hiked, played games, baked cookies and dined with the young adults at the parish. He felt an identity with them through Christ during those ordinary times.

Ramirez, who went to Honduras, saw his own grandchildren looking up at him at the clinic. These are the moments that impact us.

After returning from a mission trip, Brother Homan had this to say: “We realized that our work was not world-changing. It would not radically alter the lives of the people we met. The communities, however, would radically alter our lives.”

PREVIOUS: Every Christian is a missionary

NEXT: We’re on a mission from God: Road trips with a purpose