Six years ago Archbishop Charles Chaput stunned an audience of professionals not easily moved. He announced to the annual convention of the Catholic Press Association (CPA) in Indianapolis in 2012 that the venerable Catholic Standard and Times had ceased publishing after 112 years. The money needed to print and mail newspapers to a dwindling readership was exhausted, and the Philadelphia Archdiocese was going to have to find new ways to help Catholics stay informed, inspired and formed in the Catholic faith.

CatholicPhilly.com, the digital successor to the CS&T, picked up that mission and six years later is seeing continued growth and success. Along the way we’ve received honors from the CPA for innovations in digital distribution for our website, which serves 130,000 visits a month, and our newsletter, whose subscribers now number more than 7,100 since its launch in July 2012.

Last week at this year’s Catholic Media Convention in Green Bay, the CPA honored CatholicPhilly.com with awards for outstanding editorial content produced during 2017.

We won first place in the Investigative/Analysis News Writing category for our exclusive six-part series, “The Opioid Epidemic: A Catholic Perspective,” by Gina Christian, senior content producer at CatholicPhilly.

The award citation read: “The reporter did a comprehensive and fully exhaustive examination of the opioid crises and the wide-ranging effects it is having in Philadelphia. The series revealed the extent of the crisis through anecdotal and statistical evidence. The reporting also focused on the Catholic response to the crisis, even diving into whether addiction is a sin. And finally, the reporting also offered potential solutions to the problem, or at least options being provided through the dedicated efforts of many individuals and organizations. Top-notch and in-depth reporting.”

Another first-place award in the Best News Coverage of a Local Event went to CatholicPhilly for our story “Parish Mass attendance drops again, but cultural diversity surging,” by this writer, and for “Parishioners are speaking of faith in 20 languages” by writer Lou Baldwin – a living treasure of Catholic journalism if ever there was. 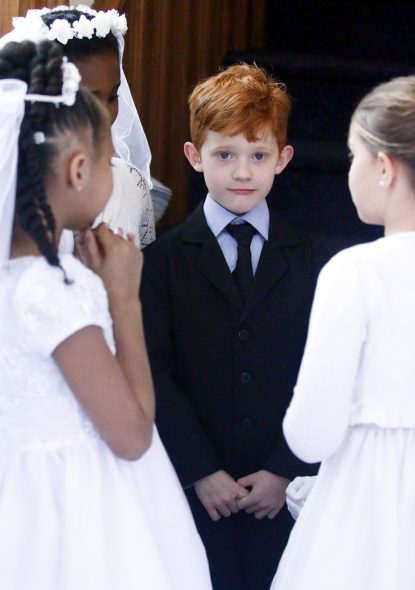 Xavier Berry waits with his fellow first communicants at the first holy Communion Mass April 30, 2017 at Our Lady of Lourdes Church, Philadelphia (Photo by Sarah Webb).

And my fellow Catholic journalists got a glimpse of what CatholicPhilly’s (and the CS&T’s) readers have known for many years: staff photographer Sarah Webb is one of Philadelphia’s finest photojournalists. She received the award for Best Photograph-Portrait for her coverage of a first holy Communion Mass at Our Lady of Lourdes Parish, Philadelphia.

The winning photo on this page (and the others from this event here) could speak a thousand words, but none are needed to convey the heart-warming emotion of the shot.

Finally, the CPA awarded our own Archbishop Chaput with a second-place honor for his book, “Strangers in a Strange Land: Living the Catholic Faith in a Post-Christian World.”

Why second place? As the award citation mentions, “It was particularly difficult to choose between the first- and second-place books.” The first-place award went to Iraqi Bishop Saad Sirop Hanna who wrote about the ordeal of his 2006 kidnapping and capture by Sunni Muslims in Baghdad.

“Archbishop Chaput,” read the award citation, “is an outstanding writer and teacher and his book is challenging and rewarding. He offers tremendous wisdom for our day. While the book explores living the faith in a ‘post-Christian world’ Chaput tells us that terminology is a lie ‘so long as the fire of Christian faith, hope and love lives in any one of us.’ He encourages us to look beyond our culture to see and strive for being the change that the world needs. Archbishop relies on the words of theologians, clergy, philosophers and historians to support his thesis. Excellent reading.”

These awards are just the surface of the strong content — articles, photos, videos, podcasts — presented on CatholicPhilly.com, a daily newspaper of sorts for Catholic news, commentary and catechesis still available for free in a time when more and more websites are charging users for access.

We don’t charge for access but we do rely on a generous archdiocesan subsidy, relationships with valued local advertisers (see our media kit) and most especially on donations from readers like you.

From February to June of this year we’ve run a donations campaign through which we’ve collected $4,032 from 76 donors, with an average gift amount of $53.

Gifts like that help us produce more stories on local parishes, schools, social service programs and archdiocesan initiatives. It’s Catholic news not to be found anywhere else. It’s made possible by your generosity.

I personally am grateful for it, but even more grateful to know this is the fruit of a relationship among committed Catholics to share the good news in new ways — through CatholicPhilly.com, our newsletter (sign up here), our social media channels — just as our Christian baptism calls each of us to do. If our readers can learn some nugget about our life in Christ in this time and place, and share that with others, we’ve done our job to build this community – no, this communion – of faith in southeastern Pennsylvania.

It’s a mission we’re determined to improve upon with creativity for many years to come, God willing, in communion with you.

PREVIOUS: Instead of separating families, U.S. should get at root of problem

NEXT: Trauma of family separation has long-term impacts on kids