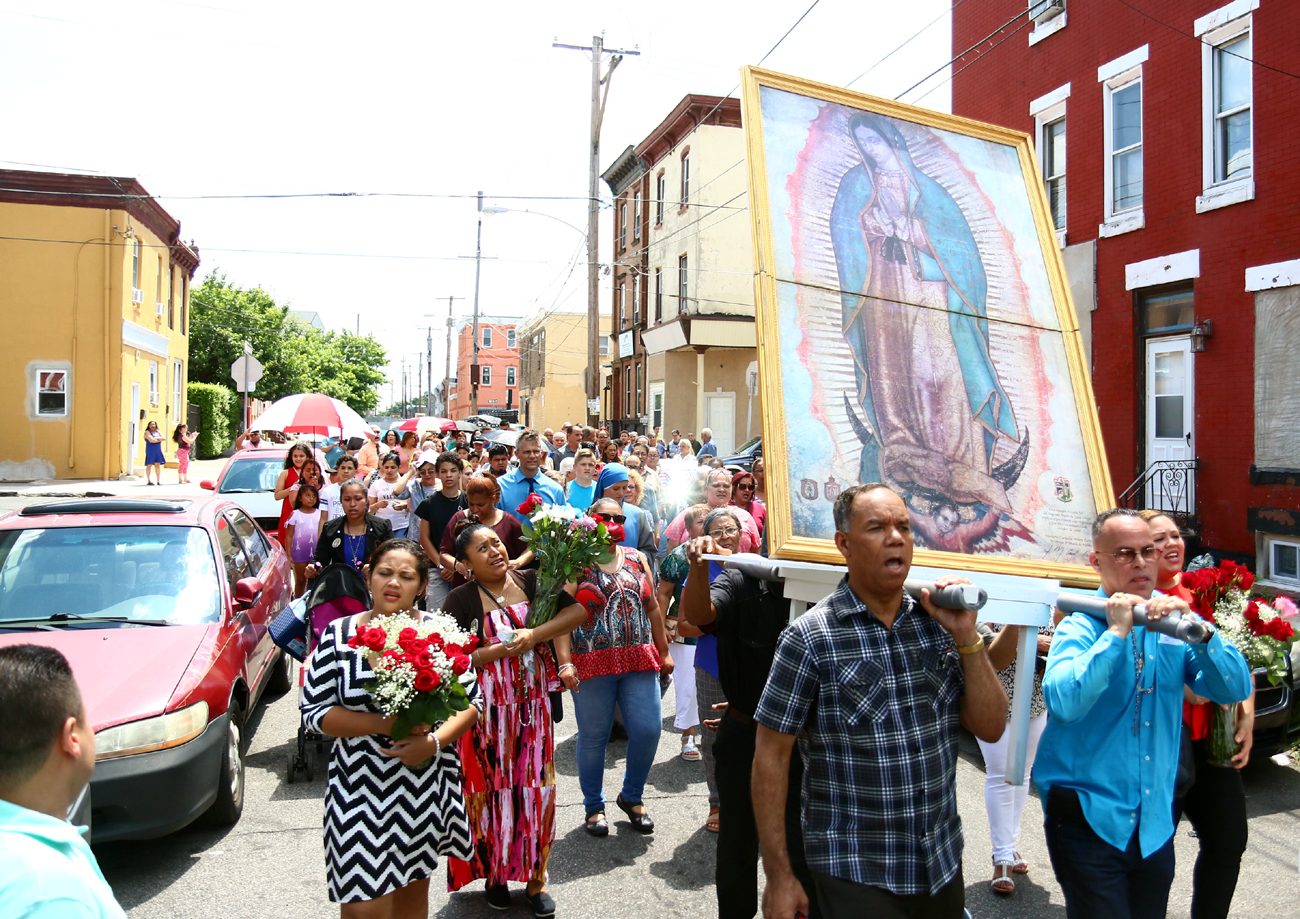 Parishioners of St. Veronica's march and pray the rosary under the banner of Our Lady of Guadalupe in a procession through the predominantly Hispanic neighborhoods of North Philadelphia Sunday afternoon, June 24. (Photo by Sarah Webb)

When St. Veronica Parish in North Philadelphia conducts a mission, it does it in style. One of the highlights of a Marian Mission celebrated June 21-25 in the parish was a grand street procession through the busy neighborhoods on Sunday, June 24, dedicated to the Blessed Virgin. It followed a Mass at St. Hugh of Cluny Church, which is now a chapel of St. Veronica.

(See scenes from the day in our photo gallery, here.)

The particular title of Mary honored during this mission and rosary procession was Our Lady of Guadalupe, a devotion that is especially celebrated in Mexico but has since spread through the United States and to other parts of Latin America, Father LoJacono explained.

“We try to follow the Lord and be witness to the Lord by putting Jesus and Mary everywhere,” he said.

The Spanish-language Mass at St. Hugh definitely was not just “said” by the celebrant, Incarnate Word Father Augustin Bollini Roca, it was a celebration by the entire congregation.

Come to think of it, that’s exactly as it should be. The Last Supper, the first Mass with Jesus himself as officiant, was a Passover feast, an occasion of joy.

At this Mass, the several hundred mostly Hispanic congregants joyfully sang along or clapped along with the energetic choir.

Afterward the procession, led by a large crucifix, an image of Our Lady of Guadalupe and flags of the United States of America and the Holy See, was led by Father LoJacono and joined by many congregants praying the rosary aloud.

It prayerfully took a meandering route along the streets, joining up with others from St. Veronica before ending at that church about a mile away, where another Mass was celebrated. Along the way, residents stopped what they were doing and turned off their own music out of respect for Jesus and the Holy Virgin.

Because that area of North Philadelphia has only been heavily Hispanic for the past few decades, most of those in attendance were originally from other countries or areas, but now have found a new home.

“This parish is the best thing that ever happened to the neighborhood,” declared David Neris, who worships at St. Hugh. “I’ve been here for 20 years. It is a shame our school (St. Hugh) closed and the kids have to go farther.”

Helen Bena, who worships at St. Veronica, said she does so “because I believe in the Word.”

Bena has only been in the U.S. for a few months, but speaks English as if she was born here. “I learned it as a child watching cartoons on television,” she said.

“St. Veronica is the best,” declared Carmen Alfaro, a resident of the neighborhood for 45 years. “Everybody loves St. Veronica and never want to leave. Immigration is growing and we are doing a lot of mission work.”

Most people don’t think of the U.S. as a mission field, but it is matter of perspective. Accompanying Alfaro was Sister Maria, a member of the Servants of the Lord and the Virgin of Matara, and a native of Colombia. Although a religious sister for 24 years, she is only two years in America, and one of four of her congregation at St. Veronica.

“These are good people here with a lot of faith,” she said. 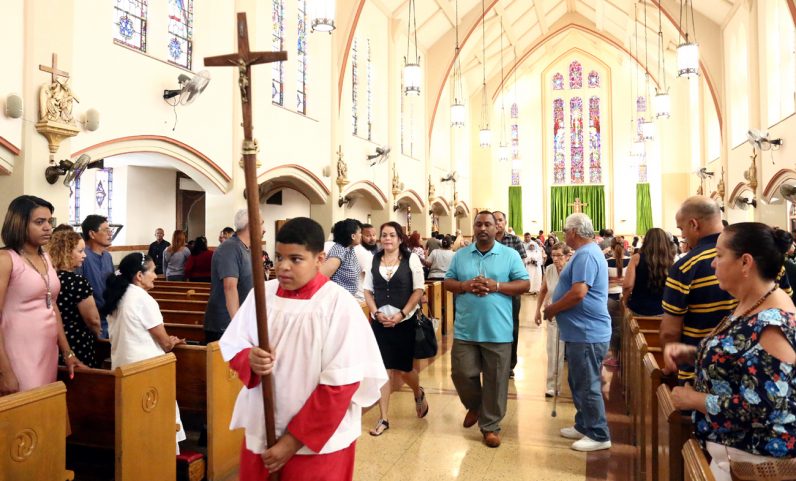 The congregation leaves St. Hugh of Cluny Church at the conclusion of Mass and begins a rosary procession to nearby St. Veronica Church and a concluding Mass there. (Sarah Webb)