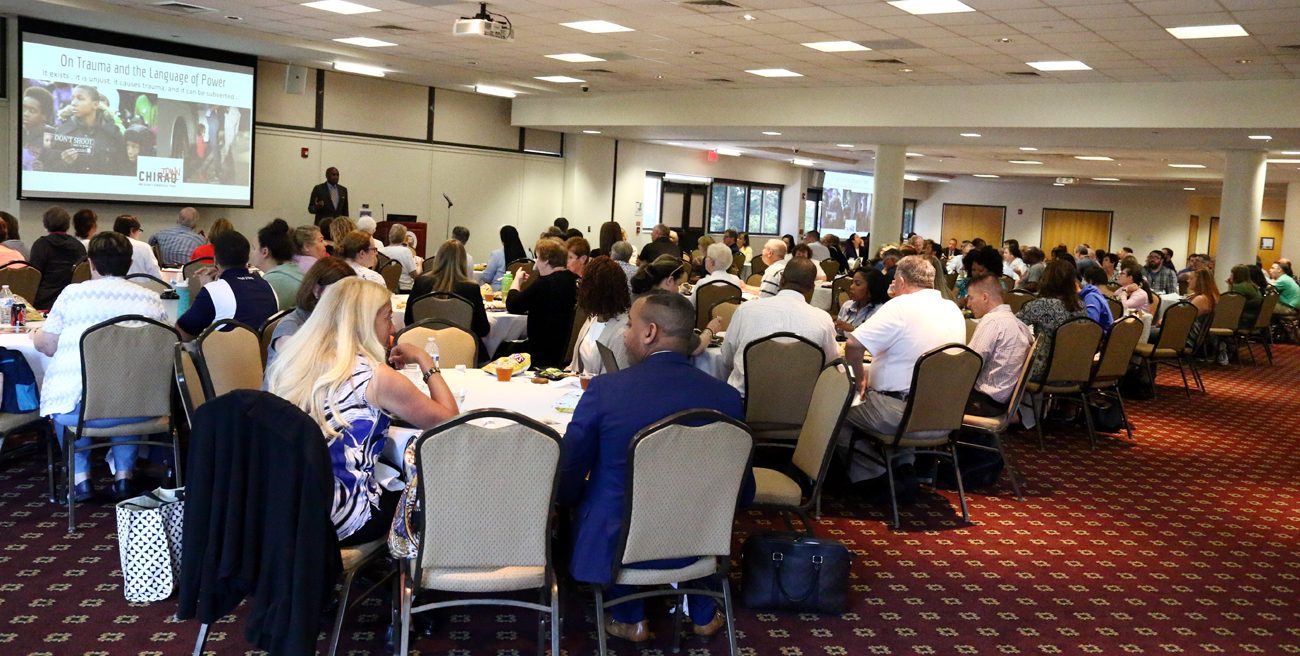 Participants in the second annual Catholic Urban Education Conference, sponsored by the archdiocesan Office of Catholic Education and the Catholic Universities and Schools Partnership, listen to the keynote address June 20 by Ernest Morrell, an English professor at the University of Notre Dame. (Photo by Sarah Webb)

A young student who keeps turning around in class and has trouble concentrating might be more than just a fidgety child. It could indicate fear of his or her surroundings even in a school where a child should feel safe.

It’s one example of how serious stress and trauma at home affects not only academic and social performance in school but also has a detrimental effect on a young person’s developing brain.

Studying the impact of trauma on students and some approaches to overcoming its effects was the topic of the second annual Catholic Urban Education Conference held June 20 at St. Joseph’s University.

About 180 Catholic school teachers in the Archdiocese of Philadelphia participated in the day-long program of workshops to gain a scientific understanding of the impact of trauma on students and to learn some approaches for overcoming its effects.

Organized by the archdiocesan Office of Catholic Education and the Catholic Universities and Schools Partnership – a consortium of 10 Catholic colleges in the Philadelphia region – researchers and other academic experts presented best practices in education from the perspective of the trauma urban students are facing.

The conference “is a wonderful intersection where Catholic educators from elementary, secondary and higher Catholic education meet to address the needs of our urban students and families,” explained Immaculate Heart Sister Maureen McDermott, archdiocesan superintendent of secondary schools.

Trauma-informed practices consider not mere occasional stress, which at low levels can be a positive motivator for children’s success on a test or a sport, but long-term, chronic, traumatic stress.

Teachers at the conference cited drug use, family break up, mental health issues within families and violence in neighborhoods as sources of trauma for children. It causes what researchers term “toxic” effects that change brain chemistry in children and adolescents, hampering their academic achievement and social skills.

The conference was geared to understanding trauma and developing strategies to help young people become more resilient despite the situations they experience at home or in their community.

At home they may be dealing with extreme emotional outbursts, perhaps incidents of violence and visits by police to the home. At school children respond to living in a constant climate of fear by staying always on alert – and turning around in their seat often to check on their safety — exhibiting a fear of loud sounds and an inability to trust adults or fellow students, along with cognitive impairments affecting academic work.

The high levels of stress hormones coursing through a young person’s body “cause immense damage,” Lelli said. “In toxic or chronic stress the brain can be affected. That’s important for us as educators to understand. They need strategies; that’s why we’re here. And the younger the child, the greater the impact.”

(Watch a video on the effect of trauma on a child’s long-term health:)

The key strategy suggested by the conference and which Lelli amplified was to emphasize the value of resilience, or grit. Elements include children learning from failures at school, setting goals, identifying feelings and discussing challenges.

Teachers should teach flexible thinking and can show examples of grit through the characters of literature and through the writing process itself.

As a classroom method, she suggested “sequencing” – going through the steps of a lesson using timelines or color coding, graphic support like a comic strip or other tools — can be helpful for students who have been cognitively impaired.

It was an approach that resonated with H.L. Ratliff, a music teacher for grades pre-Kindergarten to eighth at Gesu School in Philadelphia.

“Many of our students experience issues with the family, in the neighborhood and (at Gesu) we try to foster a place where there is a consistency,” he said. “When (Lelli) mentioned that trauma can affect the language-based parts of the brain, that really triggered something for me. She was talking about sequencing, particularly in (teaching) music.”

Even more fundamental is offering positive reinforcement such as giving praise to students, bringing in community resources such as guest speakers to model teamwork and sharing responsibility for education among teachers, staff, and school administration.

Such a holistic approach to the traumatized child can help reinforce their sense of physical and emotional well being, gain competence with school work and relationships and help them feel safe at least in school, according to Lelli.

“Building trusting relationships can be a lifeline to the student even for the future,” she said.

One element perhaps most in need among all children, especially those living with trauma, is the basic need for human connection, according to workshop presenter Thom Stecher, a teacher and professor of education for 45 years.

He lamented that the practice of a teacher hugging a student has been largely abandoned, and suggested a price is being paid by children for whom free-time play has taken a back seat to school work and organized activities.

“Children are so oppressed and overwhelmed by our world that they have no idea how to play,” he said. “Every day, we need to problem solve, to be creative and to play. That gets laughed at, but it’s a different word for full engagement; when you’re passionate, you’re playing.”

The most important factor in teaching a child successfully “is teacher relationship,” he said. “It’s more than just communicating content.”

The adult-to-student relationship is essential to offering a young person “descriptive feedback” for learning from his or her mistakes, “to discuss what worked and what didn’t in short-term, observable behavior,” Stecher said.

School communities should work to build a “profile of resilience” for students marked by four characteristics, according to Stecher: social competence or skill at forming relationships; problem-solving skills; personal autonomy to form one’s sense of identity; and a sense of purpose — “to have hope, persistence, expectations and a sense of the future,” he said.

Personal grit or the ability to bounce back despite one’s traumatic home life was seen at the conference as a survival skill, and judging by the topics of the day’s workshops, kids and their teachers are fighting an uphill struggle.

In addition to the above, workshops included play therapy for traumatized children, training for suicide prevention, supporting homeless youths and an analysis of the hip-hop lyrics of the late Tupac Shakur to explore trauma among young black men. 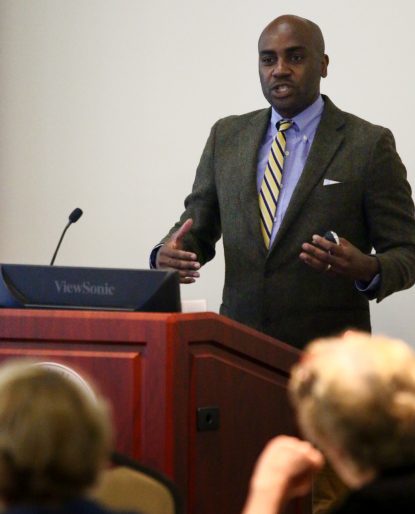 Dr. Ernest Morrell, director of the University of Notre Dame’s Center for Literacy Education, delivers the keynote address “On Trauma and the Language of Power” June 20 at St. Joseph’s University. (Sarah Webb)

The keynote address for the day by University of Notre Dame professor Ernest Morrell looked at the “language of trauma” and how the media’s influences on teens and children as a means of selling products is a source of subtle yet insidious trauma.

Morrell, director of Notre Dame’s Center for Literacy Education as well as a husband and father of school-age children, said literacy skills were the key to building self-esteem among young people, especially those living with trauma.

The media’s use of violence and sexual objectification suggests to young people “this is what you’re capable of,” but by rereading the world critically, young people can be shown that “it exists, it is unjust and it causes trauma but it can be subverted through a literate pathway for children through school,” Morrell said.

A core principle of Catholic education that can be brought to bear in transforming young people’s view of the world and helping them to love themselves is to convey “this is what God is calling us to do with and for young people and their communities,” Morrrell said.

Reading at least 10 minutes more each day as a means of gaining mastery of reading, consuming high quality, culturally relevant literature and speaking up more in classrooms were keys to helping young people “reread the world, own the (cultural) narrative and produce a narrative for social change,” Morrell said.

“If we get kids to see they matter, that is a transformational step. Seeing yourself as someone who can make a difference is seeing that you matter. Building kids’ sense of self is primary. It’s the most important work we can do.” 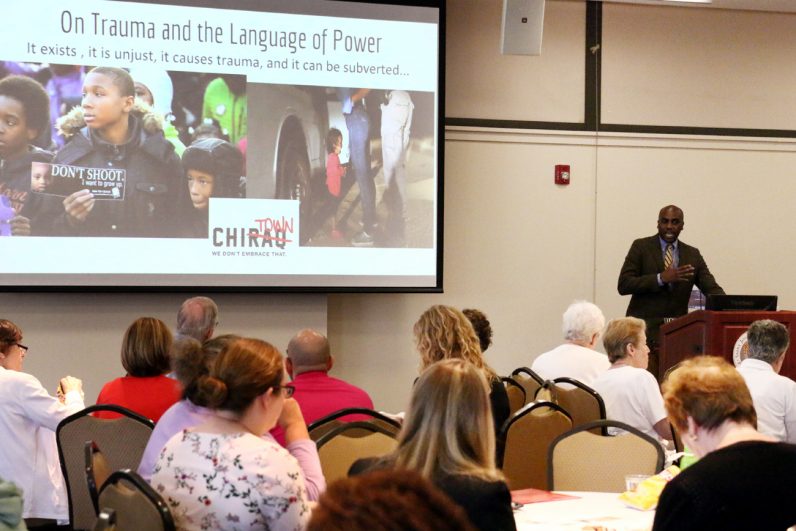 PREVIOUS: ‘Thank you for saving us’: Refugees start new life with Catholics’ help