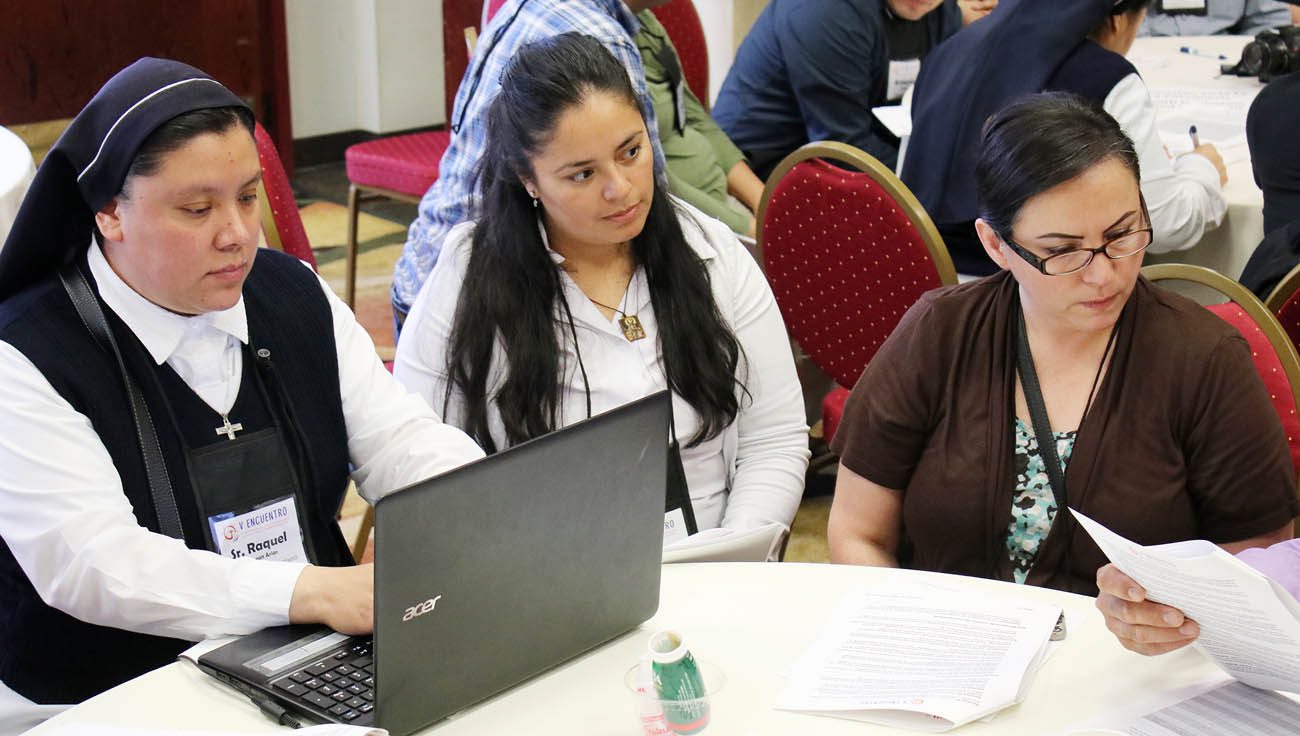 PORTLAND, Ore. (CNS) — In an unremarkable-looking conference room at a hotel in downtown Portland — a city known for its dearth of traditional religious practice — a gathering of Catholics from five states did something remarkable.

Through discussion and prayer, and even a conga line, they united hard work and joy-infused faith to produce concrete ideas that will serve the spiritual life of Hispanics in the United States for years to come.

The June 22-24 gathering, hosted by the Portland Archdiocese, was the Region XII meeting of V Encuentro, a two-year process to discern the pastoral practices and priorities of Hispanic Catholics. It will culminate with the the national V Encuentro in Grapevine, Texas, Sept. 20-23.

The nearly 180 delegates hailing from 11 archdioceses and dioceses came to Portland to share ideas that emerged foremost from their love of God.

“In order to be missionary disciples, we need to know Christ, know his love, know him as a real friend; that must be a core of our identity,” said delegate Jackie Nguyen, who works in Hispanic ministry at St. Henry Parish in Gresham, Oregon.

Once filled with love for our Creator, “we will be inspired to share our love and knowledge of God with anyone and everyone who wants to listen,” Portland Archbishop Alexander K. Sample said in Spanish during his homily in the opening Mass.

Archbishop Sample spent a good portion of the weekend simply being present and sharing fellowship.

“The main reason I’m here is to listen,” he told the Catholic Sentinel, Portland’s archdiocesan newpaper. “I feel a great love for the Hispanic community — an incredibly important and vibrant part of our local church.”

Approximately 43 percent of Catholics in the Archdiocese of Portland are Hispanic; more than 45 percent are Hispanic within Region XII, which includes Oregon, Washington, Idaho, Montana and Alaska.

“We have a tremendous amount of work to do,” said Archbishop Sample in impromptu remarks to delegates. “But it’s going to take us together doing this — not just the bishops, not just the priests, not just the sisters. I would say the greater responsibility in our time lays with our laity, who touch the lives of so many.”

In response to the growing number Hispanics in the U.S. church, the U.S. bishops called for V Encuentro, or the National Fifth Encuentro, to be held in this fall. The first encuentro was held in 1972, with the most recent in 2002. A related youth meeting was held in 2006

The current encuentro process began at the parish level, with Hispanics and others discussing pastoral needs and priorities. The fruits of these discussion then were brought to diocesan-level gatherings across the United States — the Portland Archdiocese held its in January — where the priorities were further refined.

At regional gatherings, delegates again prioritized and refined the issues, looking at both challenges and solutions particular to this geographic area.

“We had a working document and used that to meditate upon,” said Pedro Rubalcava, a composer and manager at Portland-based Oregon Catholic Press. He is co-chairman of the national liturgy team for V Encuentro and was busy providing English translations for the regional meeting, as well as music.

A list of recommendations from the weekend will be sent to the V Encuentro to be presented in Texas.

“This is a process, this is not a program,” Bishop Elizondo said in Spanish during an opening talk. “This is a process … to discover with new ardor new forms of service and love — new ways to forgive and of course new ways to express ourselves spiritually and serve our community and the church in Portland, in Seattle, wherever we are, wherever God takes us.”

Following the bishop’s reflection, delegates broke into groups of approximately 10 people to address the seven priorities that emerged from the diocesan meetings. In between sessions musicians provided spirit-stirring music, which prompted dancing, clapping and the conga line.

In discussions about children’s faith formation, delegates stressed the importance of the ongoing formation of parents. Some of the challenges to formation include divorce, the loss of authority figures in families and excessive technology use.

Peer-to-peer evangelization was offered as one of the most effective ways to reach young people. And delegates suggested teaching youths theology of the body to help them see the beauty and sacredness of their physical selves.

Groups also discussed ways to unite Catholics across cultures — a recurring and central theme for the region. There is a need for bilingual individuals in parishes who can serve as bridge-builders, a role young people often can step into if given the chance, said delegates.

Parish diversity clubs were presented as one way to unify. The clubs could share different cultural histories as well as diverse devotions.

Although immigration-related concerns generally are not as acute in the region as in other parts of the country, “there is still fear here, still uncertainty,” said Deacon Felix Garcia, coordinator of Hispanic ministry for the Archdiocese of Portland.

He said immigration issues were discussed within other regional topics. “We trust in God, so within that fear the trust is comforting,” he said.

Deacon Garcia was one of the organizers of the regional meeting and will join Archbishop Sample and 17 other delegates from western Oregon at the national Encuentro.

Between sessions, Salvador Carranza, from the Diocese of Boise, Idaho, said that in ministering to Hispanics and to all the faithful “it is important, as Pope Francis says, to encounter people wherever they are.”

“It comes down to not simply educating people but meeting them where they are and journeying forward with them,” said Carranza.

There are benefits beyond the final priorities of the encuentro process, said Jesus Huerta, who works for Catholic Relief Service, the U.S. bishops’ overseas relief and development agency, and who is the co-chairman of the regional V Encuentro communications team.

“People are hungry to network, to feel connected,” he said.

PREVIOUS: ‘Blessings’ of parish twinning, how to expand mission is conference focus

NEXT: Justice Anthony Kennedy to retire from Supreme Court