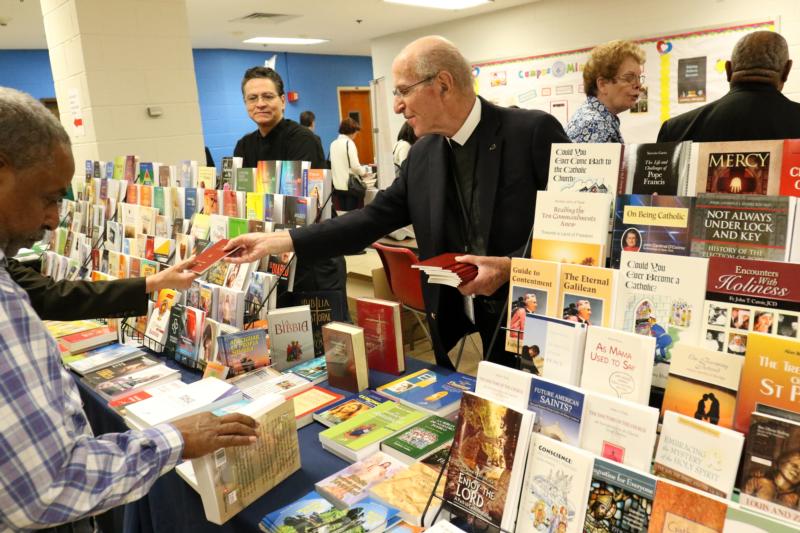 Brother Peter Lyne, a member of the Society of St. Paul, distributes complimentary booklets in the exhibitors’ area during the annual New York Catholic Bible Summit June 16 at Cathedral High School in New York City. The one-day event is co-sponsored by the Catechetical Office of the Archdiocese of New York and the American Bible Society. (CNS photo/Gregory A. Shemitz)

NEW YORK (CNS) — Joy has to be rooted in the fullness of reality, the suffering of the Cross, the glory of the Resurrection and the providence of God, not in a gooey meringue of sweetness.

This was one of the messages Cardinal Thomas Collins of Toronto shared with a New York audience June 16.

At a time when the church is under attack by “grievously, ferociously secular people who are trying to squeeze faith out of everything,” those who take a deep dive into Scripture will find joy and some clarity, according to the cardinal.

Cardinal Collins said the Book of Psalms, with its copious examples of joy as a response to anxiety and fear, is a good resource for contemplative prayer. In the midst of the storms and strife of people’s contemporary lives, prayer puts events into a God-given perspective, he said.

Praying the psalms offers a window on reality because they describe “the good, the bad and the ugly,” he said. Because it is comprehensive and instructive, the Book of Psalms is “almost a fifth Gospel, the Gospel of David.”

Cardinal Collins said the psalms are the “inspired hymns of the Old Testament.”

During an address he delivered largely without notes, the cardinal recited psalms from memory and used self-deprecating humor to illustrate the challenges of daily prayer.

“We need to train ourselves and ask the Lord for the disciples’ discipline to pay attention,” and hear the word of God in the gentle breeze, the cardinal said. “When we pray the scriptures, we’re not supposed to squeeze them, but be attentive” and seek the path to God.

He cautioned against following religions that feature thunder and lightning, because “you’re likely to get scorched.”

Cardinal Collins said personal prayer is important but can become too self-absorbed and self-relevant. Formal prayer, such as the Mass, scripture and the Hail Mary, can “stretch us and take us to” a new place in our relationship with God.

People can engage their mind during routine formal prayer by slowing down, praying aloud, or moving their lips while reading silently, he said.

Distraction is a normal experience during prayer and can be kept to a minimum by “pulling your mind back to the text or repeating a phrase,” he said. “It’s good to pray in a quiet place, but sometimes the distraction is between our ears — and sometimes your distraction will be your prayer.”

Formal prayer, including the Liturgy of the Hours with specific readings for each day, “challenges me to think of a broader perspective than my own current one. I get out of my personal happiness and experience the suffering of others or I can leave my suffering and experience the greater joy of others,” he said.

There is a time for both personal and formal prayers, Cardinal Collins said. He recalled “Jesus ad libbed his prayers in the Garden of Gethsemane, but quoted the psalms when he was on the cross.”

Cardinal Collins said prayer should generally be “workmanlike and part of who we are, like the heart: it’s hidden, steady and does not have a creative beat.”

He said it is rare for people to have an intense high from their prayer unless they are mystics. In fact, some saints, including St. Teresa of Kolkata, only experienced a heady excitement from prayer a handful of times in their lives.

Although God sometimes gives us “cheap and temporary” joy of the “gooey” kind, sustainable joy and true faith are deeper, the cardinal said.

“There is evil all around us, some of it subtle, some not so subtle,” he said. “We are called to serve the Lord with gladness and in Christ we find our joy, not in the false sense that everything’s fine, but in the cold realism that sees the evil around us … but also the promise of God. Our symbol is not a happy face, it’s the cross of Jesus Christ, which is where we find our joy.”

“We are facing an assault on faith and it’s all the more important we not react in a way that imitates the oppressors, but respond with the deep joy of the Gospel,” he said.

The Bible Summit was co-sponsored by the Catechetical Office and the Department of Youth Faith Formation of the Archdiocese of New York and the American Bible Society. Presenters from the United States, Spain, Central and South America led 16 workshops that explored the conference theme of “Live the Gospel of Joy!”

Archbishop Bernardito Auza, permanent observer of the Holy See to the United Nations, concelebrated the opening Mass with Cardinals Collins and Omella, Bishop Octavio Cisneros, auxiliary of Brooklyn and twelve priests. The homilist was Father Dempsey Rosales Acosta, associate professor of theology at University of St. Thomas in Houston.