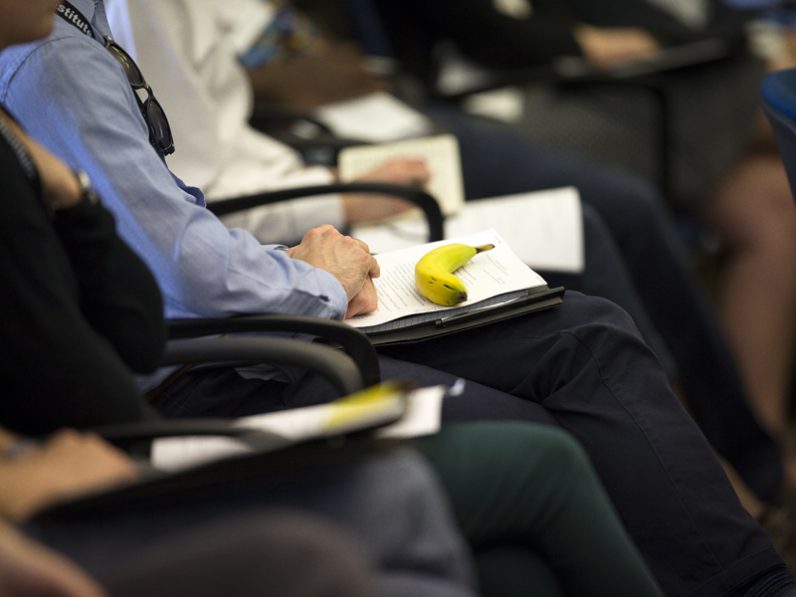 People listen to speakers June 7 during a symposium about the intersection of religion and science at the Thomistic Institute in Washington. (CNS photo/Tyler Orsburn)

WASHINGTON (CNS) — Finding an international conference at which talks about astronomy and eucharistic adoration fit on the same schedule is rare.

The three-day symposium, called “Thomistic Philosophy and Natural Science” and held in Washington by the Thomistic Institute and the Society of Catholic Scientists, focused on the intersection between the natural sciences, especially physics and biology, and Thomistic thought.

Despite the intellectual material (and it was very intellectual — “There’s a steep learning curve,” said Dominican Father Dominic Legge, assistant director of the Thomistic Institute) the speakers were able to explain why what they had to say mattered outside of their field.

Practical questions, he said, relate to the ways in which people go about their lives and emerge from existential questions that ask about the end of life and why people live.

In his talk, De Haan discussed “hylomorphism,” the Aristotelian idea that things — in this case, people — are a combination of matter (the body) and form (the soul.) He claimed that new mechanists, who view mechanisms in the brain as phenomena constituted through the organization of their component entities and activities, are echoing hylomorphic ideas.

As a result, he claimed, hylomorphism can provide a rigorous ontological framework for the new mechanist philosophy of science.

De Haan also discussed the centrality of wonder to any search for truth. His comments paralleled Father Legge’s ideas about the reasons for the growth of the Thomistic Institute, which seeks to promote Catholic truth with intellectual formation, especially at colleges and universities. In its 10 years of existence, it has grown to over 30 chapters at different schools.

Father Legge said he believes students’ curiosity has helped lead them to the Thomistic Institute.

“They come to us because they’ve already been studying. They’re hungry and have intuitions,” he said. Karin Oberg, a professor of astronomy at Harvard University, echoed the praise of the students both at the conference and at the Thomistic Institute in general.

Stephen Meredith, a professor of pathology, biochemistry and molecular biology, and neurology at the University of Chicago, used sources beyond philosophical writing in his talk. At the beginning, he displayed on the screen the outline he planned on using before his wife reminded him not to speak for too long. So he said, “This is the talk I will give,” and pressed a button; half the items on the outline were crossed out.

He gave the scientific history of what led to the death of “vitalism” as a serious idea for explaining the difference between living and nonliving things, quoting Moliere in the process. Vitalism was a doctrine that the functions of a living organism are due to a vital principle distinct from physicochemical forces.

Then Meredith turned to “Ulysses.”

He quoted the passage in which Stephen Daedalus considers welshing on a debt because all the molecules in his body have changed and so “I am other I now.” However, Daedalus eventually admits that he is still the same person “because under everchanging forms.” According to Meredith, this passage shows “the united self leads to ethics.”

Another highlight of the conference was an improvised “quodlibetal” — the medieval term for an exercise in which a master takes questions on any subject from his audience. Conference speakers asked each other questions and took them from the audience.

A disputed question from an earlier talk by Dominican Father Nicanor Austriaco, a biologist at Providence College in Providence, Rhode Island, resurfaced. The speakers spent over half an hour determining how to apply Aristotle’s four causes to evolution to determine the efficient cause of the evolutionary change from, say, lizards to snakes.

New questions, such as the efficient cause of the formation of water from hydrogen and oxygen and the Aristotelian distinction between plants and animals, also emerged as the speakers continued their discussion.

Other speakers at the conference included Bill Carroll, a research fellow at Blackfriars, Oxford, England; Stephen Barr, a professor of physics at the University of Delaware; and Dominican Father Michael Dodds, professor of philosophy and theology at the Dominican School of Philosophy and Theology, a graduate school in Berkeley, California.

Barr, who helped found the Society of Catholic Scientists, said conferences like this one, where people discuss the nuances of both science and the Catholic faith over meals, helped him overcome the sense he had when he first entered the academy that he was the only religious person there.

“A lot of religious people in the sciences keep their heads down,” he said, due to a combination of isolation and fear of judgment. Others expressed similar views.

But at the conference, both “intellectual and spiritual fulfillment,” to use Barr’s words, were available for anyone willing to listen and learn.

NEXT: Bishops across U.S. condemn separation, detention of migrant children