Gathering looks at how to overcome polarization using social teaching 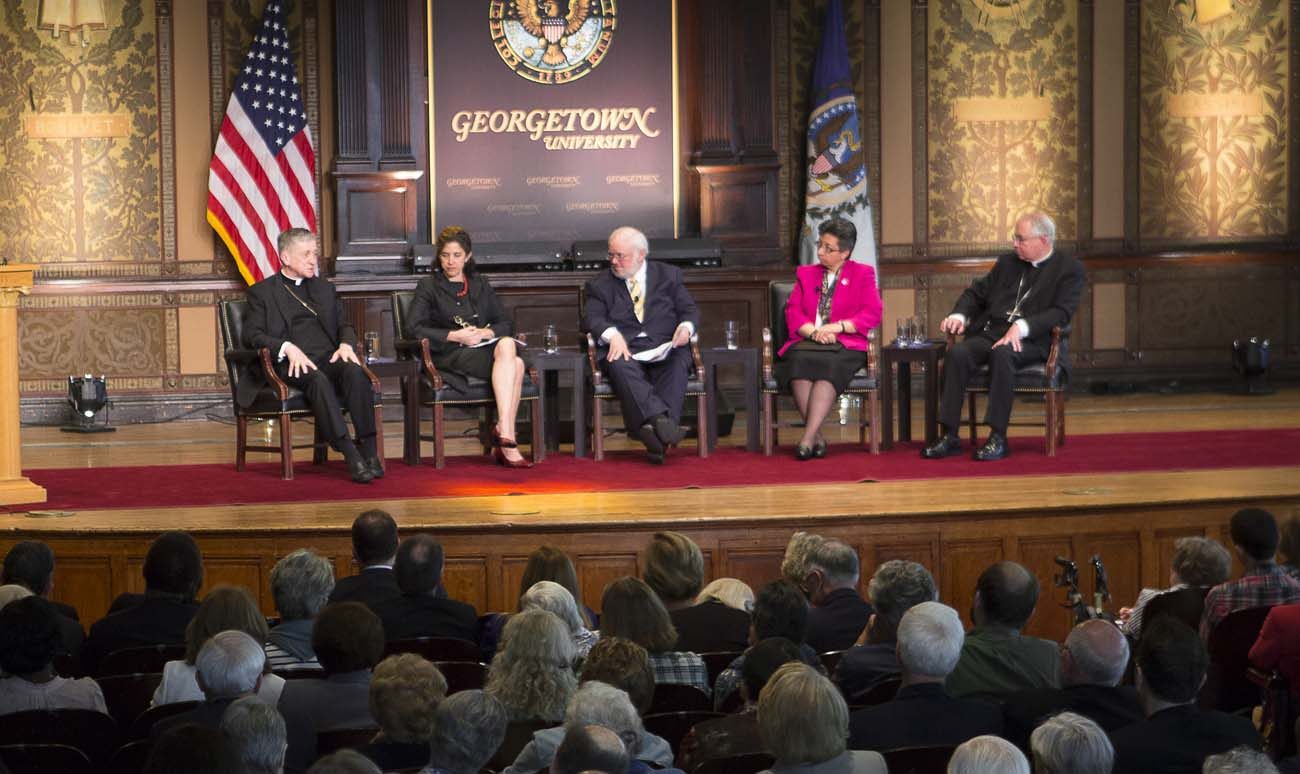 They were there to share ideas on overcoming polarization in the church and in U.S. society.

Researchers presented survey results on polarization at the conference and noted that U.S. Catholics are deeply divided on controversial issues like abortion and immigration.

“We’ve tried to provide a shelter, if not a home, for people who belong to the same family — the Catholic family,” he said, noting that Catholic social teaching on the dignity of all human life, solidarity with the poor and care for the environment can unite Catholics in working for the common good.

The gathering reflected Pope Francis’ call for dialogue and a culture of encounter in the church, said Jesuit Father James Martin, a popular author and editor at large of America, the Jesuits’ national magazine.

“The Holy Spirit drew us here. The Holy Spirit is about unity,” said Father Martin, who has written about the need for dialogue between the LGBT community and the Catholic Church.

In today’s social media age, it’s important “to encounter the person rather than the Twitter handle,” he said.

“The divisions between the social justice and pro-life crowds might be more perception than reality,” he said, noting that as representatives of those groups listened to each other at the conference, they expressed common concern for the unborn, the poor, immigrants and refugees.

Parishes can be the place where Catholics help build relationships across different communities, drawing on their shared faith, said Alejandro Aguilera-Titus, assistant director of Hispanic affairs in the U.S. Conference of Catholic Bishops’ cultural diversity secretariat and coordinator of the National Fifth Encuentro, also known as “V Encuentro.”

Planning for the V Encuentro in Grapevine, Texas, in September, which will examine how the church can better minister to its growing Hispanic population, has involved grass-roots efforts across the nation’s parishes and reflects the much-needed culture of encounter, he said.

Kathryn Jean Lopez, editor-at-large of National Review Online, noted how the magazine’s Catholic conservative founder, William F. Buckley Jr., “was able to have robust conversations and meals with people he didn’t agree with.”

One of the blessings of the polarization gathering was that it gave Catholics from different backgrounds who had never met each other the chance to build relationships, she said.

“I think going in front of the Blessed Sacrament is the next step,” she said.

In the closing session, participants shared ideas from their earlier roundtable discussions, such as fostering civil dialogue through careful listening and seeing the other person as part of the solution. In terms of media strategies, people were encouraged to read publications with different viewpoints so they can learn from them. To evangelize the next generation, it was recommended that Catholics make an effort to meet and accompany young people where they are, especially as mentors.

It is important to embrace, not erase, racial, cultural and ethnic differences, and also for Catholics to reflect on the impact of racism on the country and the church, said Gloria Purvis, co-host of EWTN radio program “Morning Glory,” who took part in discussions on “Building Bridges: Moving Past Ethnic and Racial Divisions.”

“We’re all one body of Christ,” she said.

“I think we can learn from each other,” said Sarah Yaklic, director of Grotto Network at the University of Notre Dame in South Bend, Indiana, which shares stories through its website and social media in an effort to evangelize young adults.

Young Catholics can offer a new language, and new ways, to share eternal truths, she said.

Vincent Alvarez, president of the New York City Central Labor Council — the umbrella organization for the city’s more than 1 million union members — noted the church’s historic relationship with labor and working people, and how priests comforted workers and their families in the aftermath of 9/11.

The church’s mission is to bring Christ to people “and leave the world a better place,” he said.

John Garvey, president of The Catholic University of America in Washington, noted during the conference how Congress seems to be at a perpetual impasse in passing immigration reform, even though many members support it.

“When we shout at each other, we undermine democracy. It makes it impossible to sit in the same room and come to a decision,” he said. “We have to start treating each other with Christian charity.”

Sister Norma Pimentel, executive director of Catholic Charities of the Rio Grande Valley in the Diocese of Brownsville, Texas and a member of the Missionaries of Jesus, spoke about her work with immigrants and refugees on Texas’ border with Mexico.

“We’re here not to forget they’re human beings — they’re us,” she said, noting that the same spirit can help to break down polarization in the church and in society.

Washington’s Catholic Charities president and CEO, Msgr. John Enzler, said he once served as pastor of a D.C. parish whose members included politicians and pundits from different sides of the political spectrum. “They were all believers, doing their best to practice the faith,” he said, adding that he has found it is important as a priest to “get in the middle, and find a way to preach and teach the message of Jesus.”

Kim Daniels, a member of the Vatican’s Secretariat for Communications, noted that reaching people with different views doesn’t mean compromising the church’s teaching on human dignity. “Our job is to be faithful,” she said.

Catholic social teaching “holds out for all of us a field of common ground on which we can all stand,” Cardinal Donald W. Wuerl of Washington said at the start of the conference.

Chicago Cardinal Blase J. Cupich and Los Angeles Archbishop Jose H. Gomez spoke on a panel that included Helen Alvare, professor of law at George Mason University’s Antonin Scalia Law School in Arlington, Virginia, and Sister Teresa Maya, a Sister of Charity of the Incarnate Word from San Antonio, who is president of the Leadership Conference of Women Religious.

“There really is no contradiction between having strong convictions on an issue, and still being able to talk with people. That’s part of (our) American heritage, public and civic argument that’s back and forth,” Cardinal Cupich said.

Polarization is “about fear,” Sister Maya said, noting that the antidote for fear is hope. “This is a time for us to embody hope, enflesh it and make it real and tangible in the world,” she said.

Alvare said that Catholics facing challenging issues in the public square need to show how their viewpoints, grounded in Catholic social teaching, promote the common good. “We have to explain the hope that is in us,” she said.

Other participants at the invitation-only conference included Sister Patricia Chappell, a Sister of Notre Dame de Namur and executive director of Pax Christi USA, Scott Appleby, dean of Notre Dame’s Keough School of Global Affairs, and Elise Italiano of The Given Institute.

NEXT: Advisory council has represented U.S. Catholic concerns for 50 years