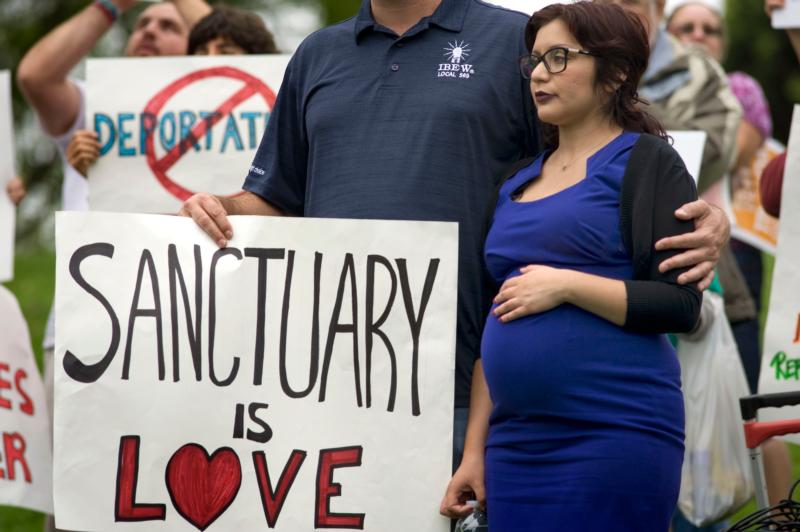 WASHINGTON (CNS) — Sanctuary cities have been getting their day in court and might get their day in a bigger court if the Justice Department gets its wish.

Since President Donald Trump issued an executive order last January to deny federal funding to jurisdictions that don’t cooperate with federal efforts to deport immigrants in the U.S. without legal status, his action has been repeatedly blocked by courts: specifically, by federal judges in California, Illinois and Pennsylvania.

On June 18, the Department of Justice took issue with one of these rulings and took it to the Supreme Court, filing an emergency application asking the court to stay a nationwide injunction that a federal judge in Chicago issued in September blocking the president’s order.

“My guess is that the Supreme Court will not lift the injunction, as it is not an emergency situation and will allow the legal process to play out,” said Kevin Appleby, senior director of international migration policy at the Center for Migration Studies of New York.

Christy Williams, who leads the State and Local Immigration Project for Catholic Legal Immigration Network Inc., said it is hard to predict what might happen at the highest court, but in the meantime local CLINIC affiliates are focusing on supporting immigrants who are fearful and providing them with information so they know their rights. Doing this, “keeps us driving,” she said.

She noted that the term “sanctuary cities” has no formal definition but has been perceived as locations that put their resources into laws to keep their communities safe and limit their participation in immigration enforcement.

One thing that gets lost in this discussion, she told Catholic News Service, is that local jurisdictions that elect not to enforce immigration laws are doing what is in the best interest of the community; it doesn’t mean they are stopping federal immigration laws because they are carried out by U.S. Immigration and Customs Enforcement, or ICE.

Williams said the church has “always supported policies that allow everyone to live with dignity and have their rights protected in a way that’s fair and just” and noted that the U.S. Conference of Catholic Bishops and individual bishops have spoken up against prioritizing enforcement over upholding human dignity and citizens’ rights.

Appleby similarly pointed out that the U.S. bishops have been “opposed to requiring state and local jurisdictions to act as immigration officers, arguing that local law enforcement should be focusing on crime in communities and that it ruins relationships with immigrant communities” and also can lead to racial profiling by local police.

He also pointed out in an email to CNS that individual bishops have called for cooperation in identifying immigrants who have committed violent felonies and are threats to the community.

In March, Attorney General Jeff Sessions announced a federal lawsuit against California for its sanctuary city policy and in a speech in Sacramento, California, he called the city’s officials “radical extremists.”

In its appeal to the Supreme Court, the Trump administration is asking the court to remove most of the order preventing the Justice Department from implementing a national policy to limit federal grants to cities, counties and states that don’t cooperate with federal immigration enforcement. The 7th U.S. Circuit Court of Appeals has agreed to consider the nationwide aspect of the injunction, but it has turned down the administration’s request to limit the ban.

The issue is over a Justice Department policy stipulating that local law enforcement entities that receive certain federal grants are expected to cooperate with federal agencies charged with enforcing immigration laws.

When Chicago challenged this policy in court, a District Court judge ruled in its favor in September. The court issued an injunction and said the Justice Department exceeded its authority, that only Congress could place restrictions on federal grants. A federal appeals court is set to hear the challenge, but because it left the injunction in place, the Department of Justice is calling on the Supreme Court. Federal judges in San Francisco and Philadelphia also have blocked the Justice Department from cutting off federal grants over the sanctuary issue. Those rulings are on appeal.

In the emergency petition, Solicitor General Noel Francisco said the court shouldn’t have issued a broad injunction when the case only specifically dealt with policing grants in Chicago. “That sweeping remedy is unjustifiable,” he said, adding that it “strays far beyond the traditional, proper role of the federal courts.”

When Trump issued the executive order last January to deny federal funds for jurisdictions that choose not to cooperate with federal efforts to deport undocumented immigrants, Bishop Joe S. Vasquez of Austin, Texas, chairman of the bishops’ migration committee, said it “would force all jurisdictions to accept a one-size-fits-all regime that might not be best for their particular jurisdictions.”

He also said this executive order could harm relationships between communities and law enforcement where building trust and supportive relations with immigrant communities is essential to reducing crime and helping victims.

Last year, the Texas Conference of Catholic Bishops condemned a law punishing local police officers for not cooperating with detainer requests issued by ICE — asking jails or law enforcement agencies to detain individuals for another 48 hours after scheduled release — and also enabling local police to ask about the legal status of anyone arrested or detained.

In March, a federal appeals court ruled that most of this law can remain in effect while a legal battle continues in a lower district court, which issued an injunction on the law last year. The 5th U.S. Circuit Court of Appeals allowed most of the law to stand.

In early June, a federal judge ruled in favor of Philadelphia’s sanctuary city policy, saying the Trump administration cannot cut off grants to the city because of how it deals with immigrants without legal documents.

Although the decision is limited to Philadelphia, it could have broader implications because it partially stems from a Supreme Court ruling in May about state gambling laws.

“The public statements of President Trump and Attorney General Sessions asserting that immigrants commit more crimes than native-born citizens are inaccurate as applied to Philadelphia” and do not justify conditions for federal grants, he wrote.

NEXT: Agreement with USAID expands reach of Malteser International Americas