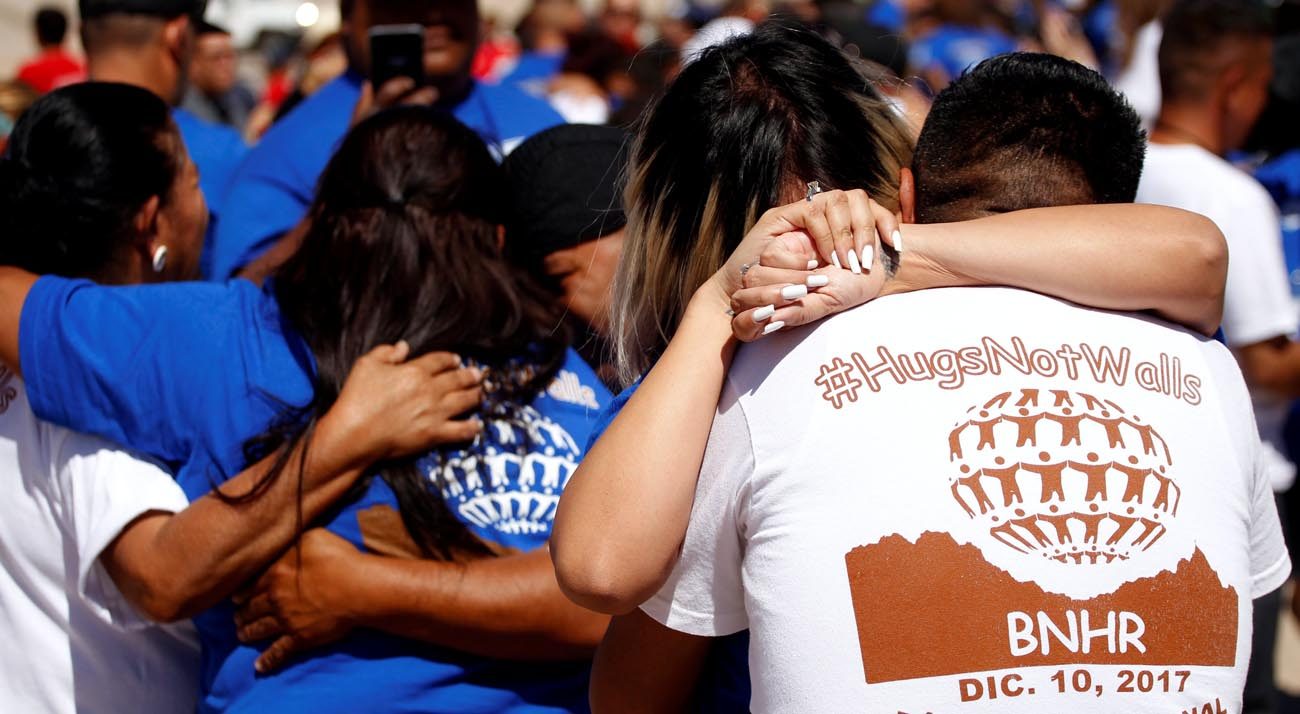 Relatives embrace as they take part in a brief reunification meeting May 2 on the border between Ciudad Juarez, Mexico, and El Paso, Texas. (CNS photo/Jose Luis Gonzalez, Reuters)

TUCSON, Ariz. (CNS) — None of the stories were pretty.

The three panelists at a Tucson workshop on “Perspectives on Border Life” told stories from three perspectives: as someone growing up in the border towns of El Paso in Texas and Ciudad Juarez in Mexico; as a Tucson doctor serving a large refugee population; and as an author/reporter covering the fate of people crossing the Sonoran Desert into Arizona.

The workshop was held June 1, the last day of the annual meeting of the Catholic Legal Immigration Network Inc., known as CLINIC.

Adame talked about being born in El Paso, raised in Juarez and studying in Las Cruces, and the difficulties in negotiating the U.S.-Mexico border. Las Cruces is a 50-minute ride to El Paso, which abuts Juarez at the international border. Many people struggle to navigate the divided family and social interests of living in border cities.

There is constant “intimidation” from U.S. Immigration and Customs Enforcement officials at the border, he said.

Adame relayed an interview with a woman who frequently crosses the border. She turns off all the music and electronic devices in her car, tells her children to roll down all the windows and never make eye contact with ICE security guards. It can take two hours to cross by car into the U.S.

In El Paso, there are armed guards in border areas aimed at limiting gang and drug activity. “That’s for our own (U.S. citizens’) protection.”

Adame knows that building trust and community is an uphill battle in places such as El Paso and Juarez. However, he remains committed to using Catholic social teaching to bring people together.

Margaret Regan is originally from Philadelphia and has lived in Tucson almost 30 years. In 2000, she began covering stories about people who died in the Sonoran Desert trying to come to the U.S.

“The “Death of Josseline: Immigration Stories From the Arizona Borderlands,” in 2010, was named Southwest Book of the Year. She followed that up with “Detained and Deported: Stories of Immigrant Families Under Fire” five years later. She currently works as an editor and writer at the Tucson Weekly, a local alternative newspaper.

“Back then (in 2000), migrants dying in the desert was ‘new,'” Regan said. “My first time speaking to a migrant was with a man whose cousin died in his arms six hours earlier. The cousin didn’t even want to come to the U.S., but was a father of four children and wanted a better life for them.”

Since 2000, more than 7,200 bodies have been recovered from the desert, although the number of dead is presumed to be much higher because of how quickly bodies decompose in the heat and can’t be recovered, Regan said.

Her earlier stories involved interviews with ranchers whose secret for success relied upon two people: “Back in the day, you needed a son to succeed you and a Mexican to take care of the animals.”

When the father of Sen. Jeff Flake, R-Arizona, died last year, a contingent of Mexican ranch hands who had worked on family ranch attended the funeral, Regan noted, adding that such a relationship explained why Flake parts ways with his political party on immigration reform.

Following the signing of the North American Free Trade Agreement, immigration stepped up because NAFTA made certain U.S. imports to Mexico so inexpensive that many Mexican workers lost jobs. It was among the causes that led to the early border walls that separate major border cities, she said.

U.S. officials believed that “if you sealed off the safer urban crossings, you would stop the migration,” said Regan. What they didn’t count on was that “the landscape (desert) was not going to stop these desperate people.”

Other factors including U.S.-influenced Central American unrest in the 1980s and, lately, the environmental devastation caused by global warming, have added to the numbers of immigrants entering through the U.S. southern border.

Those who are successful in arriving in the U.S. without legal documents are usually swept up by U.S. Border Patrol agents, with the latest development has agents removing children from their families and holding each in separate detention facilities.

It’s not just tensions in border communities, she added. Regan cited several recent news stories reporting how U.S. authorities have stopped and detained U.S. citizens, suspected of being in the country illegally, in non-border cities.

“I talked to one person who said that within 100 miles of the border, there’s an asterisk on the Constitution,” she added.

Dr. Scott Wilson runs the El Rio Community Health Center in Tucson, which has various sites around the city. His practice is with the poorest of the poor, but he admits that he has no idea how many of his patients are in the U.S. without proper documentation. His office is “immigration-status blind.”

Many of the serious illnesses he sees in patients reflect a lack of preventive or early onset treatment, he said, citing diabetes, kidney failure and cancer of the liver as examples. “If you ignore care at the onset, it gets more complicated later.”

NEXT: Beehive in Catholic school viewed as ecological, religious tool