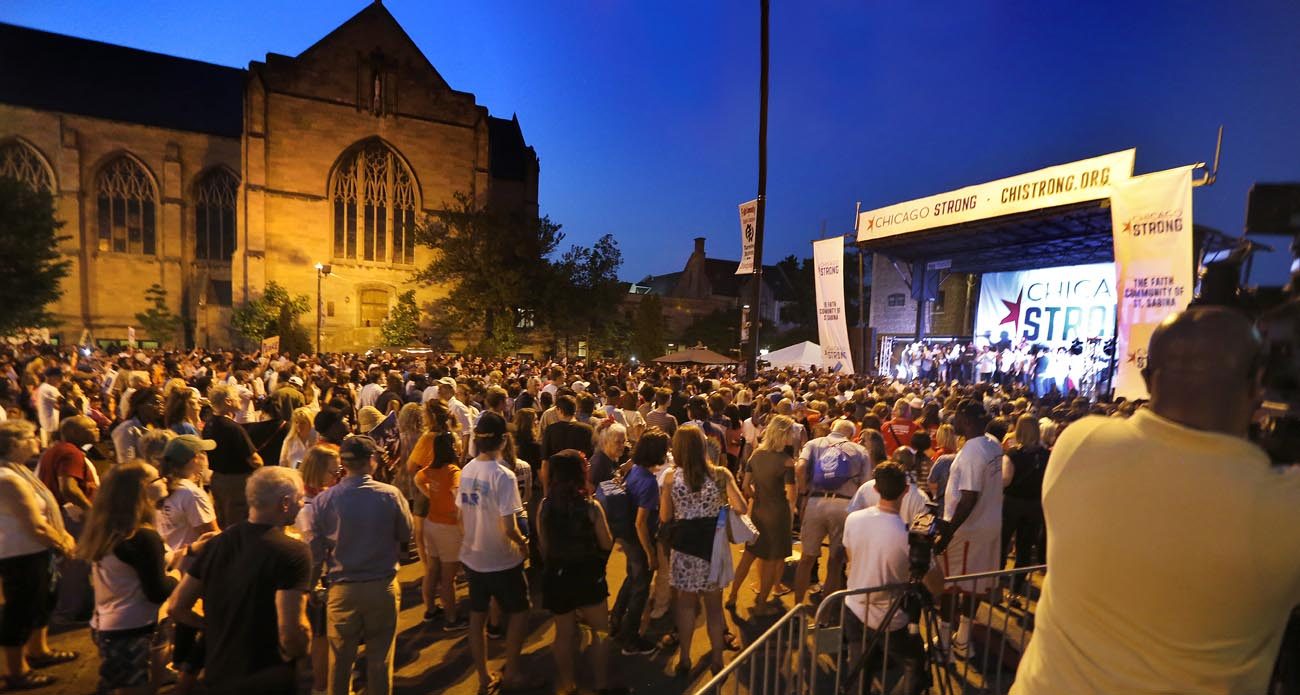 Hundreds gathered for a rally and peace march June 15 at Sabina Church in Chicago. The event kicked off a national anti-gun tour being led by students from Marjory Stoneman Douglas High School in Parkland, Fla., in memory of those killed in a mass shooting at the school in February. (CNS photo/Karen Callaway, Chicago Catholic)

CHICAGO (CNS) — For the past 10 years, at the start of summer, Father Michael Pfleger, pastor of St. Sabina Church in Chicago, and St. Sabina parishioners have held a rally to kick off weekly marches for peace in the surrounding neighborhood.

This year, March for Our Lives and students from Marjory Stoneman Douglas High School in Parkland, Florida, used the rally to launch their national tour advocating for stricter gun laws and registering young people to vote.

Instead of its usual location on the church steps, the rally took place in the church parking lot, where a large stage and sound system was erected. While the crowd was filled with people of all ages, the focus was on the young people.

Father Pfleger greeted the crowd at the start of the rally.

“Something is happening across this country. Young people are rising up, from the north to the south to the east and to the west, and they are taking control,” the priest told the gathering of several hundred people.

Young people are impatient with the gun violence in today’s society and they are unfiltered in their honesty, he told the younger people in the crowd.

“I love you because you say what is on your heart and what’s in your spirit. That’s what America needs right now,” Father Pfleger said.

Young people emceed the event and nine local youth leaders took the stage early on urging those in attendance to vote, to hold elected officials accountable for better schools and stricter gun laws and to gather together around a local organizing effort called “Chicago Strong.”

Giffords, who was seriously wounded in a 2011 shooting, followed the young people on stage and urged them to stand up for “what is right” and vote in the next presidential election so their voices are heard.

Will.i.am., the front person for the Black Eyed Peas, said he has been inspired by the young people standing up and speaking out.

“I applaud you all. I bow to you all,” he told the young people. “Let’s inspire all the youth to wake up and do the same thing.”

Many of the major movements in U.S. history have been started by young people, he said, citing the Rev. Martin Luther King Jr and Malcolm X, who both died at 39 but started their activism much earlier.

“It has always been the youth stepping up and this time it isn’t just one or two or there,” he said. “It is millions.”

Hudson, who grew up in the city’s Englewood neighborhood and whose mother, brother and 7-year-old nephew were murdered there in 2008, told the young people to stay together not just in the bad times but the good times.

“One thing my mother taught me was to take care of home first. I think that’s why we’re all here,” she said. “I want to encourage the children to stay positive and know that there is so much more to life than the block you live on.”

She then led the gathering in singing “Amazing Grace” and encouraged everyone to pray for each other and those around them “because that’s the only thing that’s going to get us through.”

Chance the Rapper, who hails from the city’s West Chatham neighborhood, rounded out the speakers.

“We’re all here for the same reason,” he said. “We want peace. We want safety from gun violence and violence of all kinds.”

With this type of movement and the amount of people involved, change can come, he said.

NEXT: Reflection, repentance from sin of racism seen as key to evangelization