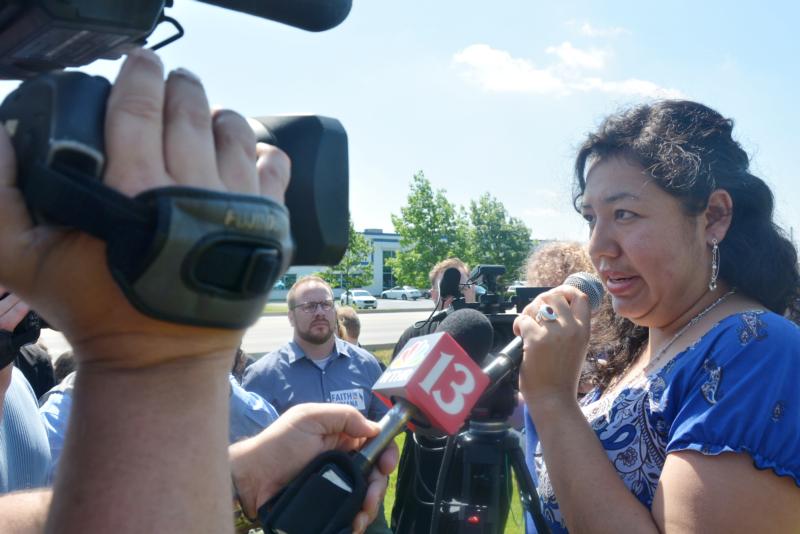 Erika Fierro speaks with members of the press May 31 after her meeting with Intensive Supervision Appearance Program officials in Indianapolis. She will be deported June 26 without her children. (CNS photo/Natalie Hoefer, The Criterion)

INDIANAPOLIS (CNS) — After standing in sweltering heat for 40 minutes, dozens of supporters cheered as Erika Fierro emerged from the building May 31.

That she exited through the front doors was a good sign. It meant that she was not being deported to Mexico — that day.

“They gave me a date to leave next month, (on) June 26,” Fierro told those present. “They” are the officials of the Intensive Supervision Appearance Program, or ISAP, and she had just met with them in Indianapolis.

But she made the statement with a strained smile.

“It’s still not enough time for me to get my kids’ passports to take them with (me),” said Fierro, the 35-year-old mother of two children, ages 3 and 8.

Their father and Fierro’s husband, Jesus Pena Rodriguez — was deported to Mexico several weeks earlier. With Fierro leaving June 26, the children will be separated from both parents until their passports are issued, said Fierro. Paperwork her husband is required to sign and have notarized is not expected to reach him until July 2.

“It’s hard because they wish their dad was with them,” she told the supporters, clergy and local news reporters present. “That’s my fear, that more trauma will be done to them, and that’s irreversible.”

Both Fierro and Rodriguez were born in Mexico. Fierro was brought to the United States at age 5 when her parents emigrated, and Rodriguez entered the U.S. as an undocumented immigrant in 1988.

Their current trouble started in early April when the couple, members of St. Patrick Parish in Indianapolis, was confronted by Immigration and Customs Enforcement officers outside of their Indianapolis home as Rodriguez was leaving for work. The incident was the result of something that occurred 11 years ago.

During the April incident, ICE officials immediately arrested Rodriguez. Fierro was allowed to stay with their children, but has been monitored through ISAP while awaiting a ruling on her status.

The week prior to the May 31 meeting, she was given the final decision: She was to be deported, with the date still undetermined. She believed her removal would occur during her May 31 meeting.

The night before that meeting, she gave an interview with The Criterion, newspaper of the Indianapolis Archdiocese. Fierro explained there had been a holdup on her children’s passports — a holdup that she believes could have been avoided.

“My husband has to sign some documents” for the issuing of the passports, she said. “I took the documents to the prison (where Rodriguez was being held). I told the ICE agents to give them to him so he could sign them and give them back to me.”

But he never received the documents, she stated. Rodriguez now needs to sign the passport-related papers in front of a notary in Mexico, she said.

To do so, she continued, he must show his Mexican identification papers. Fierro said he will not receive those papers until July 2, making it impossible for the children to have their passports by her June 26 deportation date.

While the children do have legal guardians to care for them should the need arise, “the number one thing should be that government officials keep families united,” Fierro said after pausing to choke back tears. “My daughter can’t sleep at night. She wakes up crying. She cries all the time, and so does my son.”

She said her hope is for officials “to have compassion and to wait for my children’s passports so we could leave as a family and not be any more broken apart in heart and spirit than we already are. … Waiting on my kids’ passports (before her removal), it’s something doable.”

At a news conference right before the May 31 meeting, she told reporters: “I have not asked for much, but to keep my kids, my two U.S. citizens, together with me. I pray that my children do not go through being separated from both of us.

“We ask God for the time period that is necessary to take them with (me),” she said, “and for there to be compassion and mercy not only for my family but for all families who go through this.”

Archbishop Charles C. Thompson of Indianapolis spoke briefly before praying over Fierro at the end of the news press conference.

Afterward, he spoke to The Criterion. “As the church has always taught, the family is the fabric of society. As the family goes, so does society.

“Each time the family is being divided or disintegrated or harmed in any way in our society — whether it’s through deportation, or drugs, or alcohol, or abuse, or violence — each time that happens, society loses and humanity loses,” he said.

Fierro’s immediate concern was her children losing both parents, even if only temporarily.

“I go wherever (God) takes me,” she said. “But I do pray to God to keep my family together.”