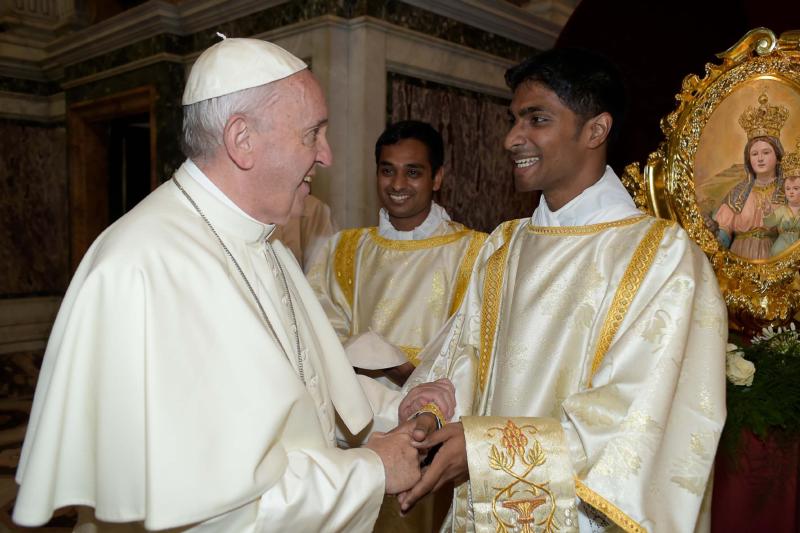 Now-Father Rajeev Philip is pictured with Pope Francis in a 2017 photo. Father Philip was ordained June 2 at a ceremony in Tampa, Fla. He becomes the first U.S.-born priest to be ordained for the Syro-Malabar Catholic Church. (CNS photo/courtesy Syro-Malabar Diocese of St. Thomas)

Now-Father Rajeev Philip is pictured with Pope Francis in a 2017 photo. Father Philip was ordained June 2 at a ceremony in Tampa, Fla. He becomes the first U.S.-born priest to be ordained for the Syro-Malabar Catholic Church. (CNS photo/courtesy Syro-Malabar Diocese of St. Thomas)

UPDATED – WASHINGTON (CNS) — In a June 2 ceremony in Tampa, Florida, Father Rajeev Philip became the second U.S.-born priest to be ordained for the Syro-Malabar Catholic Church. His ordination came about a month after that of U.S.-born Father Kevin Mundackal.

In a telephone interview with Catholic News Service May 31, two days before his ordination, Father Philip said it was not necessarily a sure thing that he would eventually become a Syro-Malabar priest.

Interested in the priesthood since his teen years, the 26-year-old Father Philip was educated in Roman Catholic schools in the Tampa area, and his family prayed together daily in their home.

“When I joined the seminary, I was kind of up in the air about where to join,” he said, adding he had considered the Roman Catholic Diocese of St. Petersburg, Florida, that encompasses the Tampa area. “There’s religious life, there’s the diocese, but I decided to join the Syro-Malabar Diocese,” he said. He was especially struck by St. John Paul II’s words in his 1995 encyclical “Ut Unum Sint” that “the church breathes with two lungs” — East and West.

The nationwide Syro-Malabar Diocese of St. Thomas is based in Chicago. The new priest did most of his undergraduate seminary study in Chicago, but was then sent to the church’s home in India for a year of service.

“The bishop (Jacob Angadiath) saw that it was important that I connect back to the mother church in a way,” Father Philip said. There, he had to brush up on Malayalam language, the native tongue of his India-born parents.

“My parents spoke that language to me growing up, so I could understand. With any language there’s a difference between conversational language and the more formal language. So I was definitely familiar, but seminary made me learn it a little bit more. Especially as a priest, I will be expected to celebrate the liturgy in Malayalam,” Father Philip said, adding that the language has 53 letters.

He said only the largest parishes have separate liturgies in Malayalam and English. The most solemn of liturgies are in Syriac, but most parishes celebrate in a mix he called “Munglish.”

Father Philip later studied in Rome for three years in the seminary at the Pontifical International College Maria Mater Ecclesiae. It was there he solidified his desire for priesthood.

“I was just overwhelmed by how beautiful the church is, how beautiful this particular call to be a priest is,” he said. “I was surrounded by men of different countries” — he put the number at 25 — “walking with these men who were going along the same path but coming form different backgrounds, was just a constant encouragement to me.”

It likely won’t be long until Father Philip becomes a “biritual” priest, credentialed to celebrate liturgies in both the Syro-Malabar and Roman rites. In fact, his second Mass of thanksgiving following ordination was a Latin-rite Mass, for which he gained permission from both Bishop Angadiath and Bishop Gregory L. Parkes of St. Petersburg.

Syro-Malabar Catholics differ not only from their Latin-rite brethren, but also from many other Eastern Catholic churches. While their numbers are small in the United States — just 87,000 — they are one of the largest Eastern churches worldwide, with 4.5 million members.

He tries to avoid the notion that he is a trailblazer, citing a Syro-Malabar seminary classmate whose ordination will take place one month after his own.

“People tell me that all the time. I try not to get caught up in all that,” Father Philip said. “We were meant to really step up and be ordained, particularly for the Syro-Malabar Church. But there are many kinds of Indians brought up in this country who have embraced their religious vocation. Maybe it’s the Jesuits. There’s one guy who became an Opus Dei priest. There is a priest for the Archdiocese of Miami.”

NEXT: Ordination of first U.S.-born Hmong-American priest a milestone