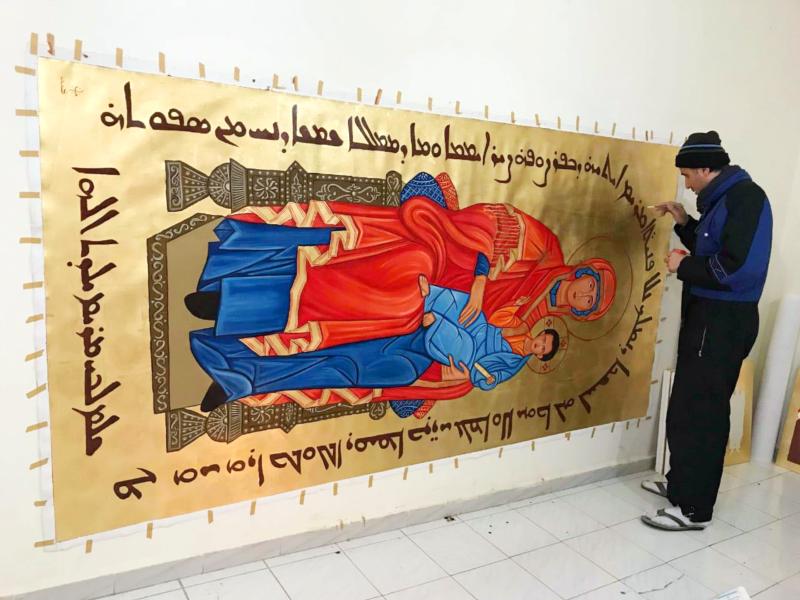 Mothana Butres of Zahle, Lebanon, works on an icon in this undated photo. (CNS photo/courtesy of Mothana Butres)

BEIRUT (CNS) — When Islamic State fighters overran Qaraqosh, Iraq, in the summer of 2014, Mothana Butres was able to grab only a single volume from his father’s collection of thousands of Syriac books and manuscripts.

The handwritten, 600-year-old book of Syriac hymns now inspires much of Butres’ work as an iconographer.

From a modest walk-up apartment in Zahle, Lebanon, a city not far from the Syrian border, the Syriac Catholic iconographer and refugee creates his sacred art in a sparsely furnished living room. As he works, he sings the hymns he has committed to memory from the sole book he managed to save.

Butres is the creator of the Our Lady of Aradin icon, a centerpiece of the first Catholic shrine dedicated to persecuted Christians. The shrine is housed in St. Michael’s Church in New York City and was dedicated June 12.

“The inspiration when I was working on Our Lady of Aradin was that it was the Virgin Mary who was protecting the Christians,” Butres told Catholic News Service.

He said that when faced with an ultimatum by Islamic State fighters, Iraq’s Christians gave up their land but refused to give up their faith.

“The people who were persecuted, their blood is a stronger message than anything I could ever convey,” he said. But the recent persecution and the oppression suffered by his ancestors led him “to the way I think and the way I do my work.”

Butres said he believes his icons can be an instrument for intercessory prayer. The prayers of the people who visit the shrine in New York and pray before the icon of Our Lady of Aradin are joined with those of the persecuted Christians.

“Based on what Jesus told us, that ‘if two people are gathered in my name, I will be among them,'” he said.

The Syriac book Butres treasures from his father’s library collection also awakened him to the lost practice of writing books by hand, especially in the Syriac language, which is spoken by Christians in certain areas of Syria and Iraq, including Qaraqosh. Syriac also is used in the liturgy of some Eastern churches, including the Syriac Catholic, Syriac Orthodox and Maronite Catholic churches. The language is related to Aramaic, the language of Jesus.

“I’m trying to revive the value of the handwritten texts. Books used to be handwritten,” Butres said.

As part of an ongoing personal project, Butres intends to write out the entire Bible in Syriac on a long scroll of leather just over a foot wide. In three months of work, the tiny, intricate text he has etched extends 16 feet in length and comprises the first five chapters of the Old Testament.

“I believe that in writing out the Bible, we can discover it in a new, deeper perspective, more than just reading it,” he said.

In his icons, Butres often incorporates streams of handwritten text related to the image, which contributes to preserving the Syriac language, heritage and spirituality. The icon of Our Lady of Aradin, for example, includes the Hail Mary in Syriac.

Butres’ introduction to iconography began at age 12; a deacon at his church in Qaraqosh taught him the ancient art as well as formulas for producing colors and varnishes from natural products, for example, using eggs and wine for shades of red, using beeswax for varnish and using deer musk to give the icon a scent.

Prayer and religious formation were part of Butres’ daily life growing up in a Syriac Catholic family as one of 16 children.

“We were very close to the church,” said. “Every day at dusk, we went to the church to pray,” he recalled, adding that for “anyone who didn’t participate, there was no dinner.” The same went for missing Sunday Mass: no lunch and dinner.

That pious upbringing fostered vocations, he said. One of Butres’ sisters became a Dominican nun. His brother, Nimatullah, is a priest serving the Syriac Catholic Diocese of Our Lady of Deliverance, which is based in Bayonne, New Jersey. Father Butres attended the dedication ceremony for the Our Lady of Aradin shrine in New York.

The artistic Butres became a deacon at age 20 and studied theology at Holy Spirit University in Lebanon, earning a bachelor’s degree.

Butres intended to complete his master’s degree in theology, carrying out his research in Qaraqosh, but had to abandon all he had accomplished there when Islamic State attacked his childhood home.

That home, overtaken, gutted and ruined by Islamic State, is under repair now. From Lebanon, Butres created the Our Lady of Qaraqosh icon as a gift for his family, intending it as “a protector of the house where she was always present.”