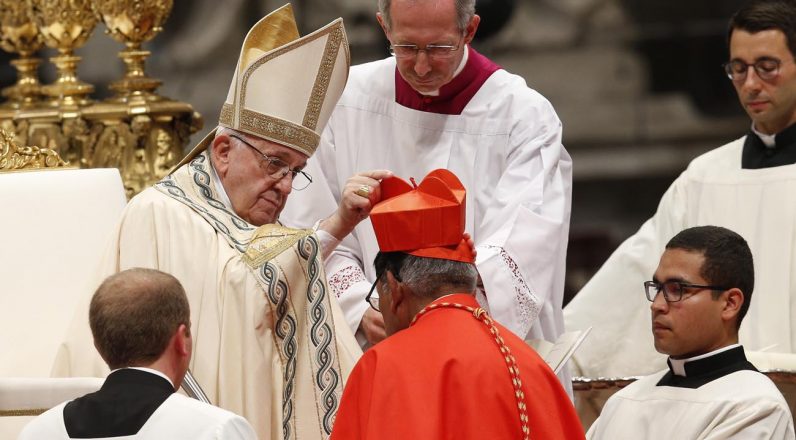 VATICAN CITY (CNS) — Upon hearing the news that Pope Francis was elevating them to the College of Cardinals, many of the 14 new cardinals were shocked to hear the pope had chosen them.

After the pope made the announcement May 20, Cardinal-designate Joseph Coutts of Karachi, Pakistan, said he was incredulous when a parish priest ran to his residence to congratulate him on his appointment.

“I couldn’t believe it. I said, ‘I’m not going to believe it. If you’re getting it just from social media, sometimes there are rumors,'” Cardinal Coutts told Catholic News Service June 26.

It wasn’t until he logged on to the Vatican website that Cardinal Coutts finally believed the news.

Arriving in Rome before he was given his red hat, Cardinal Coutts said he came early to have a two-day retreat to prepare himself this new responsibility.

“It’s nice to talk about the elevation, but for me it’s not just an elevation; it’s a widening of what I already have to do and how much more I have to do,” he told CNS.

Cardinal Coutts is the second cardinal from Pakistan in the church’s history. The first, Cardinal Joseph Cordeiro of Karachi, died in 1994.

After the consistory ceremony, the new cardinals greeted well-wishers at the Paul VI audience hall as well as the apostolic palace.

Several notable figures from the church hierarchy arrived at the palace to congratulate the new cardinals. Cardinal Tarcisio Bertone, the former Vatican secretary of state, made his way to Cardinal Luis Ladaria Ferrer, prefect of the Congregation for the Doctrine of the Faith.

Cardinal Ladaria beamed brightly as Cardinal Bertone embraced him and wished him well.

Nearby, Cardinal Konrad Krajewski, the papal almoner, smiled and opened his arms wide as he greeted well-wishers. A group of nuns and laypeople gathered near him and applauded the new cardinal’s elevation.

Cardinal Angelo Becciu, substitute secretary of state and prefect-designate of the Congregation for Saints’ Causes, was greeted by Fra’ Giacomo della Torre, the newly elected grand master of the Knights of Malta.

Cardinal Becciu also serves as Pope Francis’ special delegate to the Sovereign Military Order of Malta, a major fraternal and charitable organization that is undergoing reorganization after tensions within its leadership.

The new cardinal was also congratulated by fellow Sardinians who donned traditional outfits. The sounds of folk music from Sardinia filled the halls of the Apostolic Palace as one woman played an accordion while others sang traditional hymns from Cardinal Becciu’s homeland.

Among the new cardinals named by the pope was Cardinal Louis Raphael I Sako, the Chaldean Catholic patriarch, who told CNS his elevation has given him a new impulse to serve the people of his country, Iraq.

His appointment, he said, is a support for Christians and for Iraq so they know that they “are not forgotten, that the holy universal church thinks about them, that they should have patience and hope.”

“It is true that Iraq will be present in this celebration, but it also strongly expresses the pope’s presence in this country through these persecuted Christians. Therefore, it is a great support for Iraq as a country. More than 400 Iraqis have come for this celebration, so it is a marvel for them and a consolation after all this suffering,” Cardinal Sako told CNS.

Pope Francis’ choices for cardinals often reflect his care and concern for areas around the world where people suffer due to persecution, conflict and exploitation.

For Cardinal Pedro Barreto of Huancayo, Peru, a Jesuit like the pope, the news of his appointment was “unexpected” and “undeserved.”

He said he also believes his elevation wasn’t just a personal choice made by Pope Francis but rather a desire to be closer to the people of Peru.

Pope Francis’ “recent visit to Peru was very important because in very difficult moments, Peru united around Pope Francis with a religiosity that surprised us all more than what we thought his presence could do. Pope Francis is in Peru’s heart, and Peru is in the hearts of Pope Francis and the Catholic Church,” Cardinal Barreto told CNS.

Cardinal Aquilino Bocos Merino, the 80-year-old former superior general of the Claretian religious order and a prolific writer and speaker on the theology of religious life, told journalists June 26 that his appointment was not a recognition for him but “a support for consecrated life.”

“I am nothing more than a small example; behind me there is a community, there are provinces, there’s an entire congregation, there are other institutes,” he said.

Although he will join the ranks of several Spanish cardinals in the Catholic Church, Cardinal Bocos told journalists his new role as a non-elector cardinal was not as big of a responsibility as many his fellow cardinals had.

“Mine is just a decoration,” Cardinal Bocos said.

Contributing to this story were Robert Duncan and Carol Glatz in Rome.

NEXT: Canadian bishops warn of religious discrimination after court decision