Parishioners in Kenya disappointed after priest suspended — for rapping 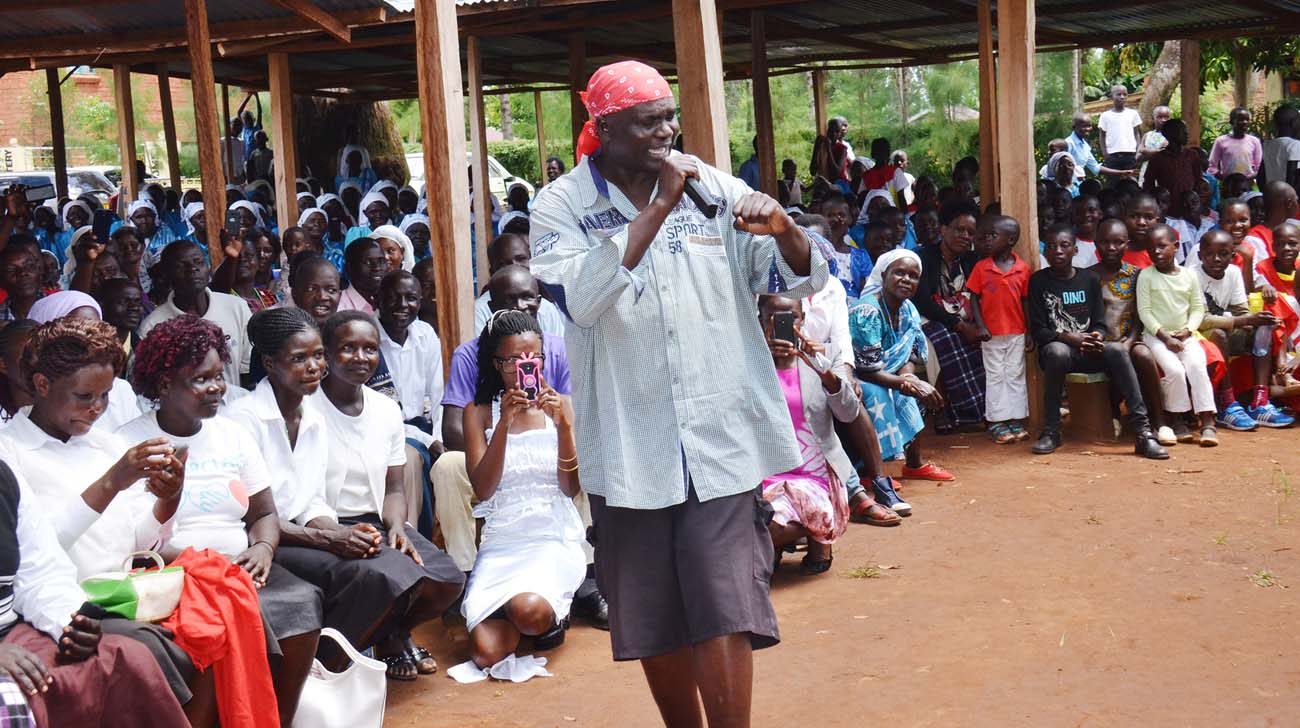 Father Paul Ogalo performs rap songs about drug abuse, food insecurity, and the environment at St. Monica Church in Rapogi, Kenya, May 6. Since then, the 45-year-old priest has been suspended one year by the Diocese of Homa Bay for performing rap after Mass. (CNS photo/Doreen Ajiambo) See KENYA-RAPPING-PRIEST June 21, 2018.

RAPOGI, Kenya (CNS) — Many parishioners at St. Monica Church in western Kenya are unhappy after their favorite priest was suspended for misconduct by the Diocese of Homa Bay.

Father Paul Ogalo was suspended June 3 for using secular music, drama and dance to attract youths to the church. The 45-year-old priest had been entertaining his parishioners with rap music, urging them to stop using drugs and to get involved in environmental and social justice issues.

Locals came to love his unique style of preaching the Gospel.

“I’m very disappointed that he is suspended. I will now not go to church,” said Benard Oketch, 28.

“Father Paul has been our mentor. He uses the language youths understand,” Oketch said. Through rap, the priest “has saved thousands of youths” from abusing drugs, he said.

Called Father Masaa or Paul SWIT, an acronym for Sees World In Turmoil, Father Ogalo had stunned and thrilled his congregation in equal measure. After celebrating Mass, he would change his priestly vestments for black shorts and a white shirt, tie a red bandana around his head, and begin rapping to the congregation.

“Ah! Ah! Yeah! Youths enjoy your youth while you are still young. But remember that God is going to judge you for whatever you do … Ah,” he would rap as his congregants, including nuns, danced to the tune.

“I use the rap music to bring … youths to the church,” Father Ogalo said. “Thereafter, I bring them to Christ.”

Church youth leader Violet Menya said the priest attracted hundreds of young people to church, where they would stay. He also initiated tree planting and other community projects, she said.

“We are happy that his style of preaching is attracting many youths to church. He has mentored very many youths to leave … drug abuse and embrace farming, business and other activities,” Menya said.

But the bishops have dismissed Father Ogalo’s style of preaching. Father Charles Kochiel, judicial vicar of the interdiocesan tribunal of Kisumu, confirmed Father Ogalo’s suspension to Catholic News Service in mid-June and said it would have been wise for the priest to have consulted the bishops “to find out if what he was doing was in accordance with church doctrine.”

“We have suspended him for a year to give him time to reconsider his ways,” Father Kochiel said, noting that “every institution has its own code of conduct.”

“There are ways of doing things. There are certain things the church promotes in the society. If we mix … what the secular and church institutions do, then definitely people are going to read different messages,” he said.

Father Ogalo, who was ordained a priest in 2000, disagreed and said that rap music “is bringing millions of youths to Christ.”

“We need to take care of the interests of youths in our churches. We need to change the way we do things,” he said, reflecting what some have said in preparation for the October Synod of Bishops on young people and discernment.

A priest and a catechist who asked not to be named were among leaders in the diocese who sympathized.

“What’s important is to bring people to Christ, nothing else,” the catechist said, adding that, “We should not fight the same body of Christ.”

“We should support any initiative that helps young people come to Christ,” said the unnamed priest, noting that Father Ogalo’s suspension is “a huge disappointment to the young generation, who are majority in the church.”

But Father Kochiel, who is also the dean of students at St. Thomas Aquinas Major Seminary in Nairobi, said that, “When something is wrong, even if the crowd goes for it, it’s still wrong.”

A priest in Father Ogalo’s situation “is given time to reconsider his ways. He is mentored by the bishops for some time before he is reinstated. This is a common practice,” Father Kochiel said.

As the battle continues, all is quiet at St. Monica Church, with few activities in the compound.

“We are not going to … participate in any church activities until Father Ogalo is reinstated. He did nothing wrong,” Oketch said.